Our hosts at our B&B urged us to ride the gondola to Sulfur Mountain next door to Banff. Near the base of the mountain is a place called Cave and Basin. It is the first of Canada’s national parks, established in 1885. We secured our tickets and climbed aboard with two other people. The ride started out kind of level as you can see below. By the time we reached the top several minutes later, we were going nearly vertical. It was great fun and scenic. The town of Banff and the surrounding valley and mountains were beautiful. 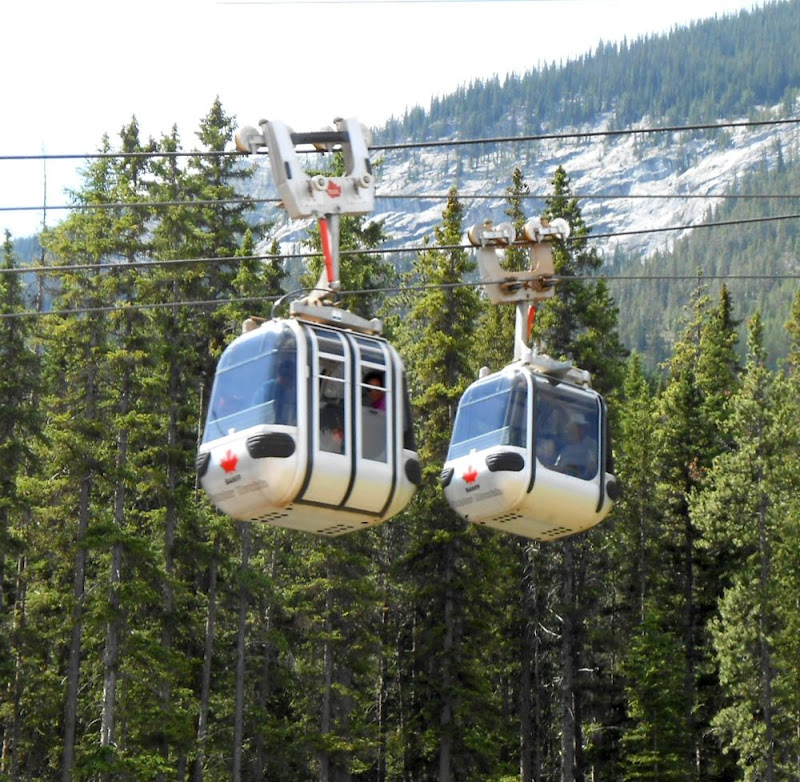 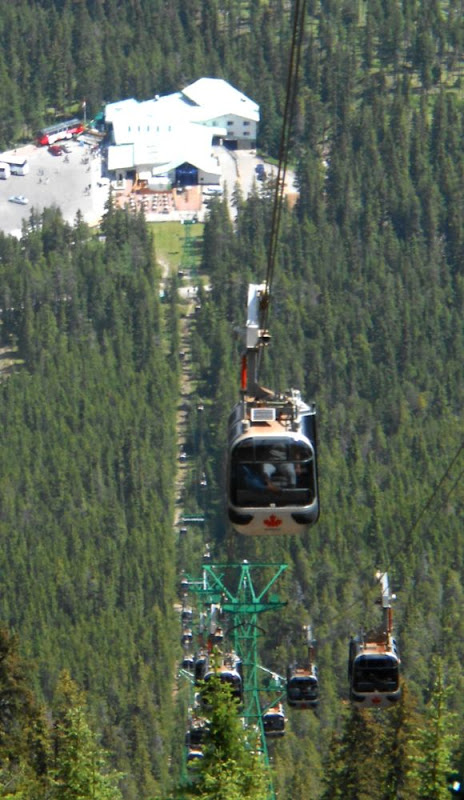 At the top was a round building housing the cable car machinery, restaurant, and gift shop. Outside was a wooden path leading to a neighboring peak. On that peak was a stone shelter that once housed weather station equipment, a cot, stove, and a few supplies. In the past, someone would hike up to the station to record the information. Today, it is automated. 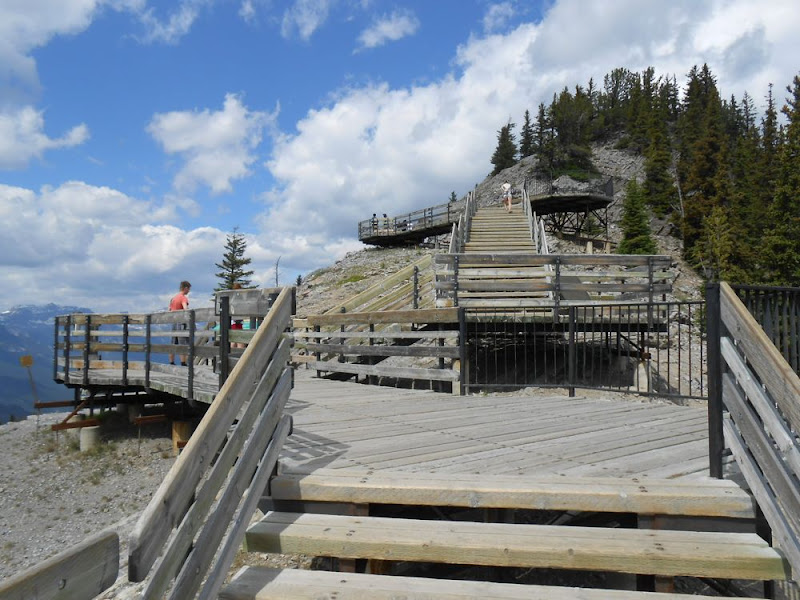 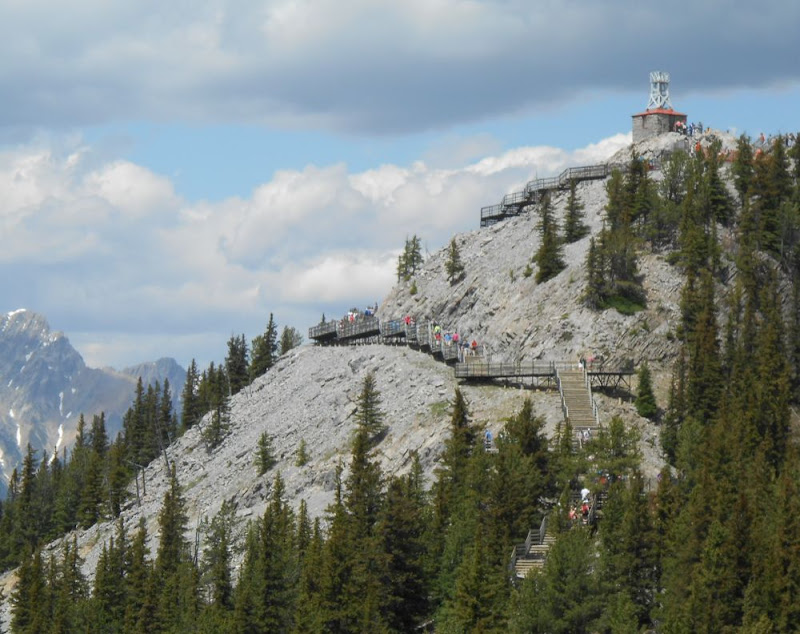 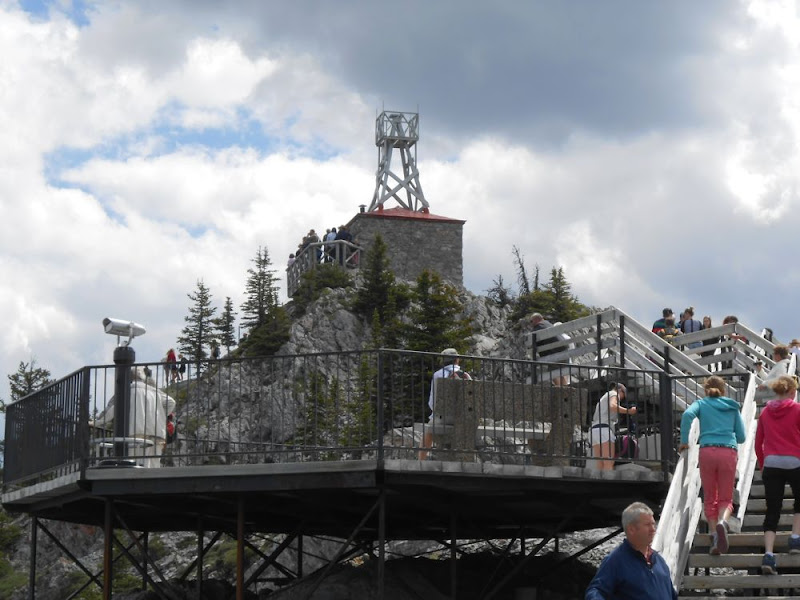 I noted the sturdiness of the building and the wooden top piece. Also, there are four lightning rods. In the door was a plexiglass window so you could view the contents. This fellow expertly placed his body in the way just as I got the shot. Every square inch of the rocks and structure had names of visitors written on them. 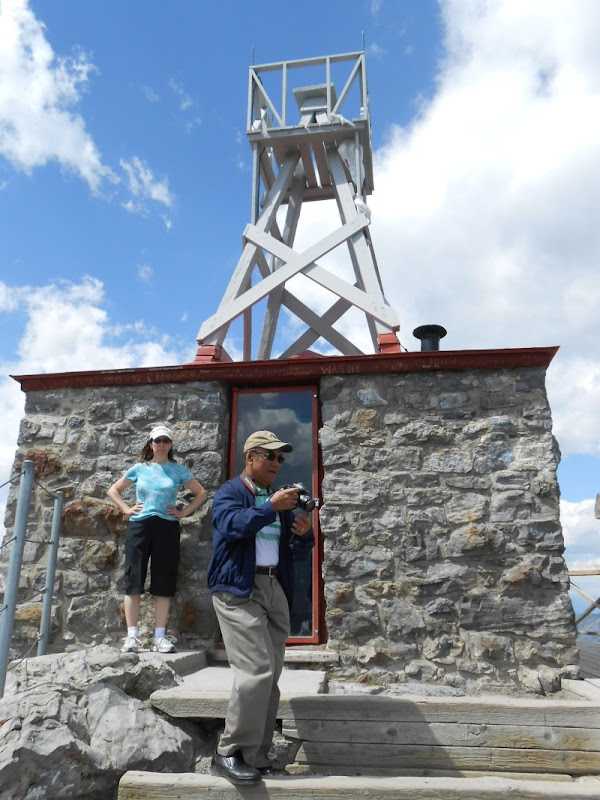 There is the round gondola building in the distance. Nice scenery in this direction. 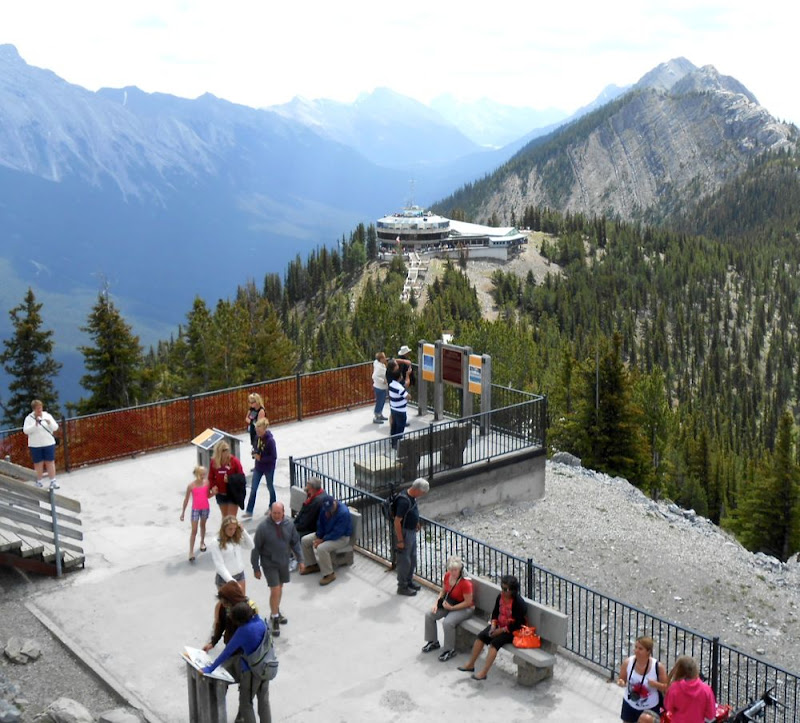 And, beautiful scenery in the opposite direction. This is toward the northwest.

We walked back to the round building and toward the back where there were fewer people. Looking down from the walkway we saw these mountain sheep. Their winter coats were coming off. They were intent on licking the gravel for something. Maybe it was salty. 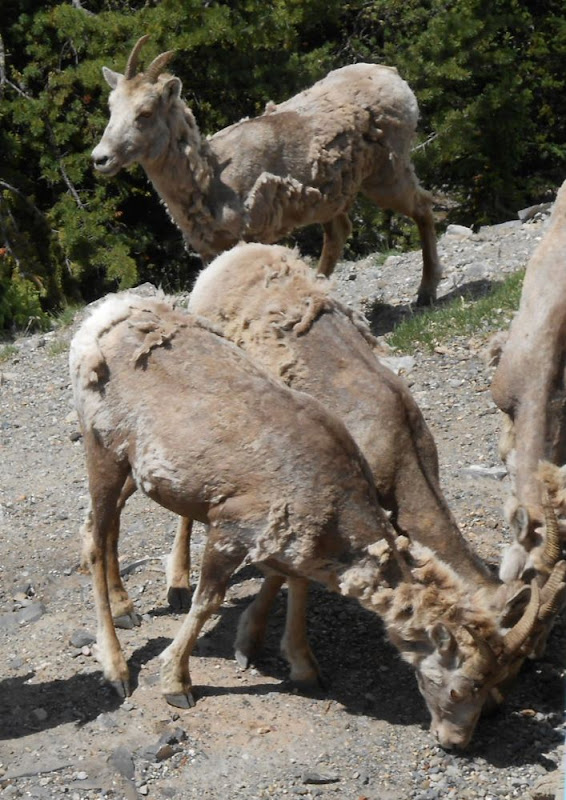 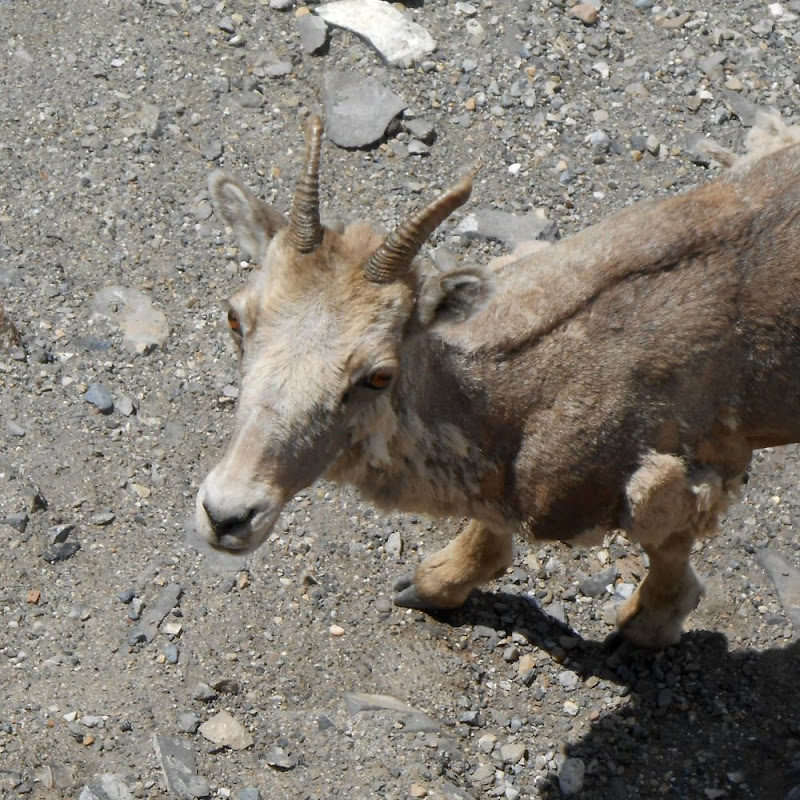 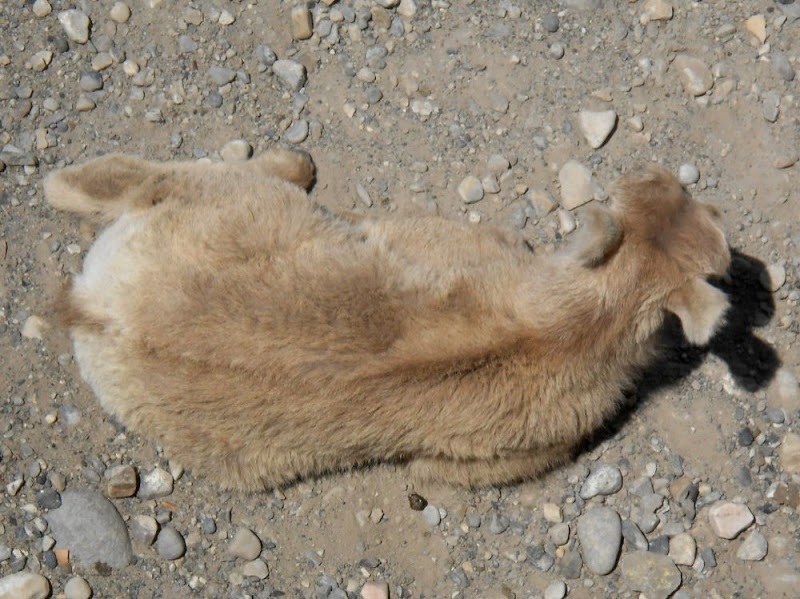 On the final day of our stay, we traveled northwest toward the town of Field. On the way, this group of elk were grazing near the road. 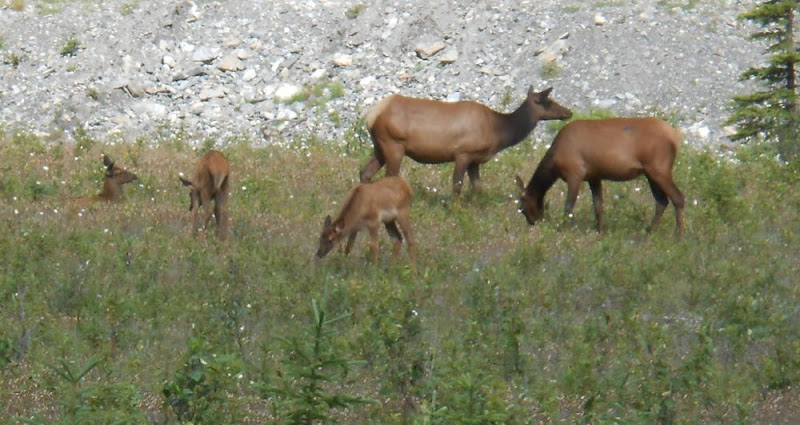 Near Field was Emerald Lake, another must see place according to our hosts. There was a trail of 5 km around the lake. It did not involve vertical climbs. Now and then rounding a bend, it is advisable to make lots of noise to alert bears. We saw none. Enough other people were hiking by to keep the bears away.

Notice the water color. As noted in earlier blog posts, this comes from the grinding action of the tumbling waters bringing tiny rock particles along the streams. It causes this beautiful color. It also causes the deeper waters to be very dark and free of life. Fish and plants are only found in the shallower waters near the shore. 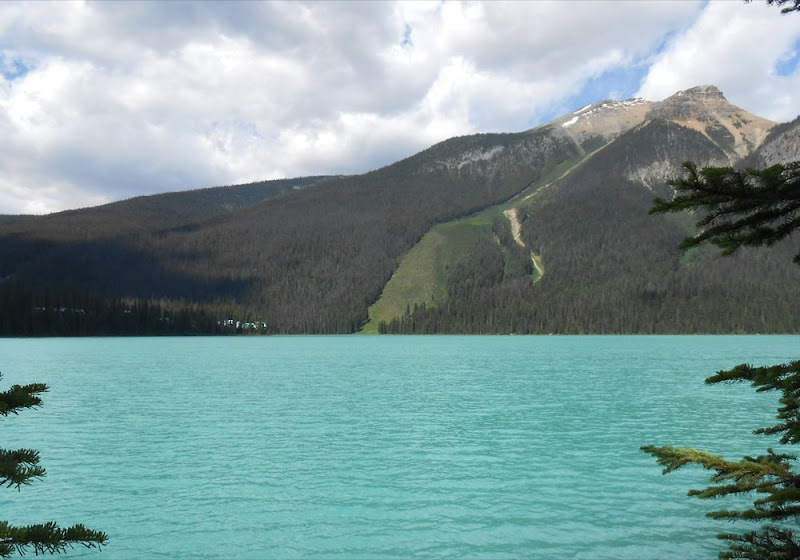 A feature on many mountain slopes is this strip of mountain free of trees. It isn’t a ski slope, though there are many in the area. These cleared slopes are from yearly snow avalanches. 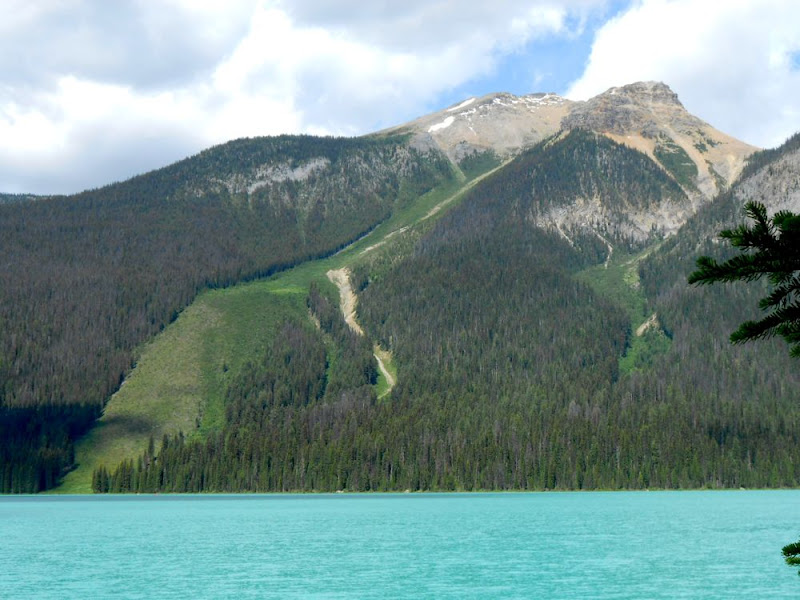 Closing out the previous posts have been some pictures of wildflowers we saw on our hikes. This time, we close with something very different. In Banff, we were looking for a place to eat. The Dancing Sasquatch sign caught our eye. Who knew that these creatures were so enterprising and owned businesses and such? 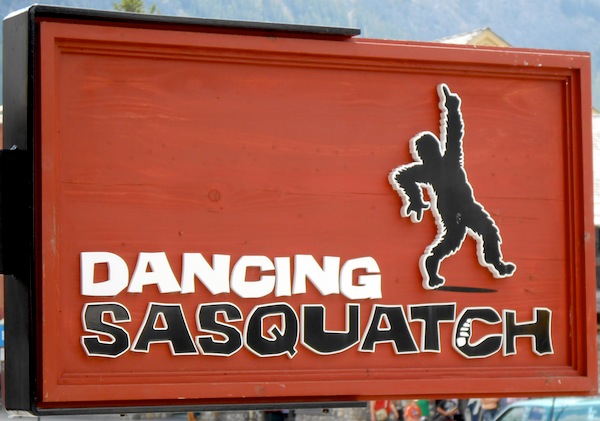 We found this guy on the road back toward Idaho. He was in front of a fitness center. He was motorized and went through the motions of walking swinging his arms and legs. All the while he was floating above the treadmill. It was very weird. 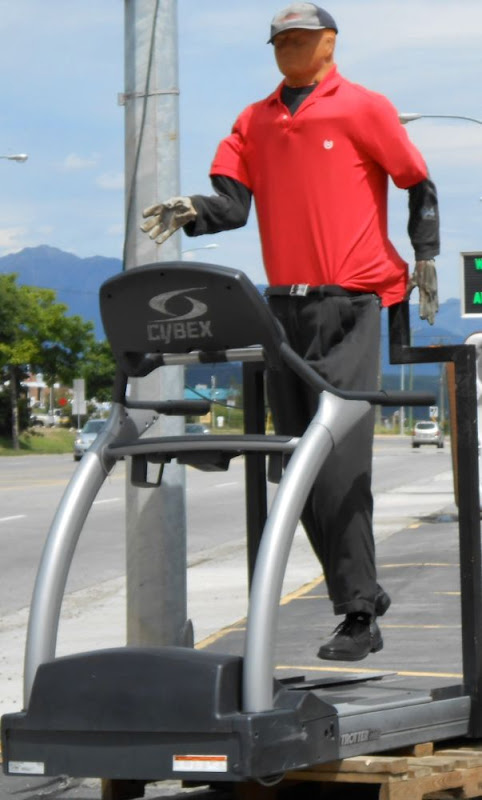 If you ever get the chance to go, don’t hesitate. It is one of the most beautiful parts of the world. Thank you for joining us.