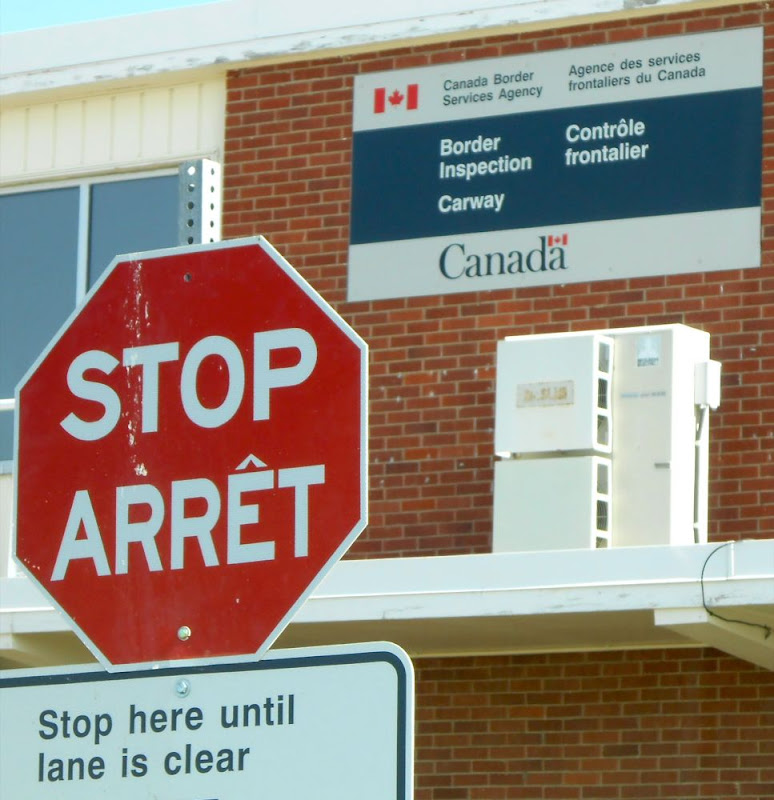 We left the east side of Glacier Park on July 7 and headed north for Canada. The border was less than an hour away. We got to the inspection station and waited for the two cars ahead to clear. Melanie was driving. We were sitting at this stop sign about 20 ft behind the vehicle ahead currently being cleared by the agent. I suggested to Melanie that she pull ahead so we were closer.

The agent waved the car ahead through. We drove up and handed him our passports and photo IDs. He looked them over and said “You folks were doing just fine until you drove up closer. Next time, stay back at that stop sign like the sign says.” He smiled, asked a few questions, and let us pass. I felt kind of sheepish. 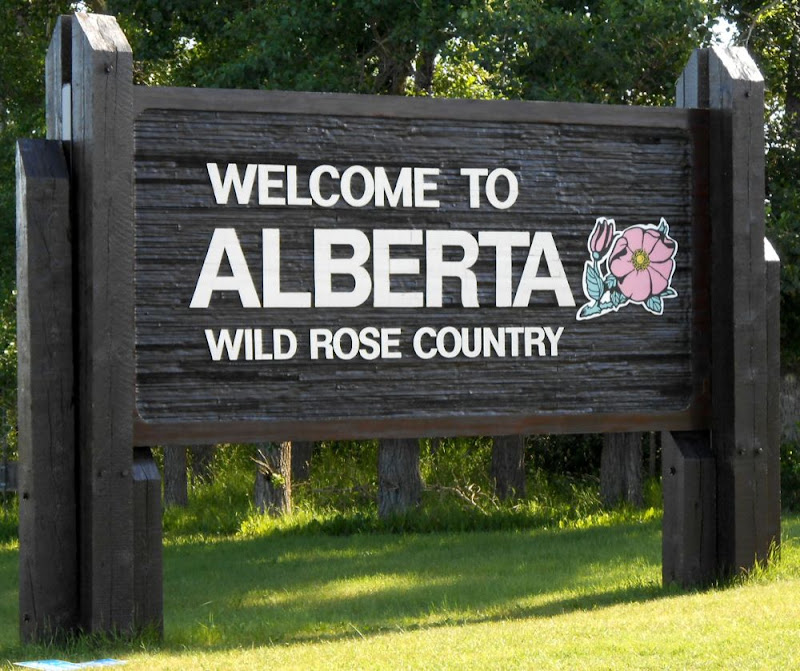 Once out of the Rockies in Montana, and now in Alberta, the shape of the land became flat. There were broad horizons, green fields, and some cattle grazing. In the distance to the northwest were the mountains we would soon re-enter. Dotting the landscape were various farmsteads. A burnt out shell of a church came into view. Two magpies guarded the cross. Melanie said she wanted a picture of the steeple. 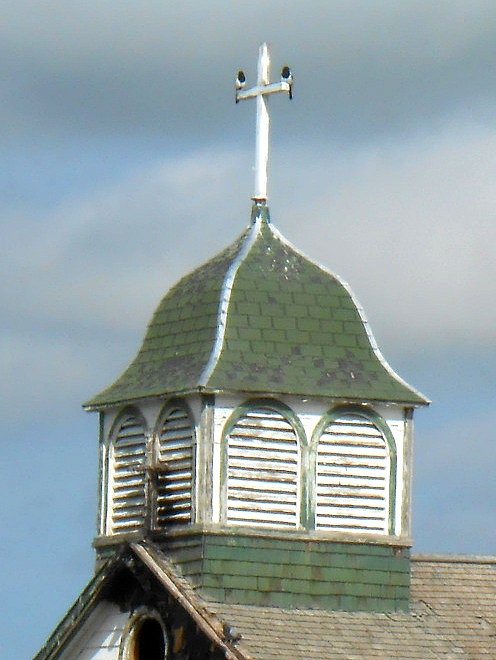 Many of the fields were immense expanses of yellow. The plants were about two feet tall. Someone later told me it was canola for making cooking oil. 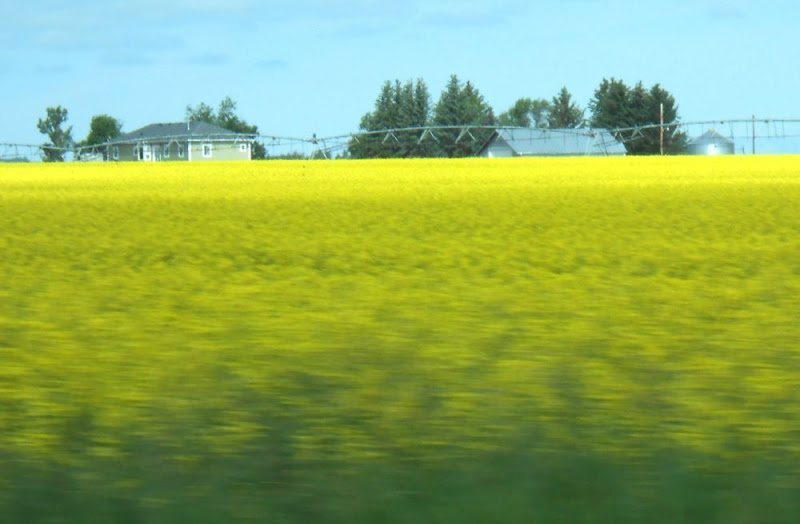 Our drive was supposed to take about 5 hours. The hosts at our B&B said to take two highways that would give us some spectacular scenery as we entered their town of Canmore, near Banff. Well, about three weeks before, the area had some very heavy rains. Bridges and roads were closed. We were diverted toward Calgary, a city of over a million people. That slowed our progress quite a bit.

We eventually made it to the B&B Quilters Inn. We had this king sized bed in the lower level. It was a lot more comfortable than the cabin we had before in Glacier. We grabbed a quick nap, dinner, and set out to explore the town. 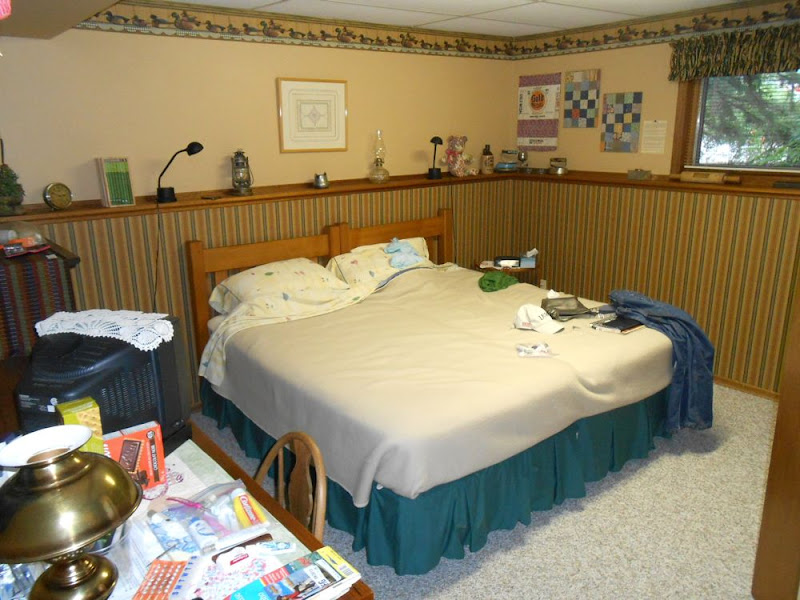 The next day broke with some rain. We decided to go into Banff about 10 miles up the road and explore some museums and the nearby spots. This is the Natural History Museum built in 1903. The top was effective in bringing in natural light. The specimens throughout are original and most are from 100 to 150 yrs old. It is an amazing place. 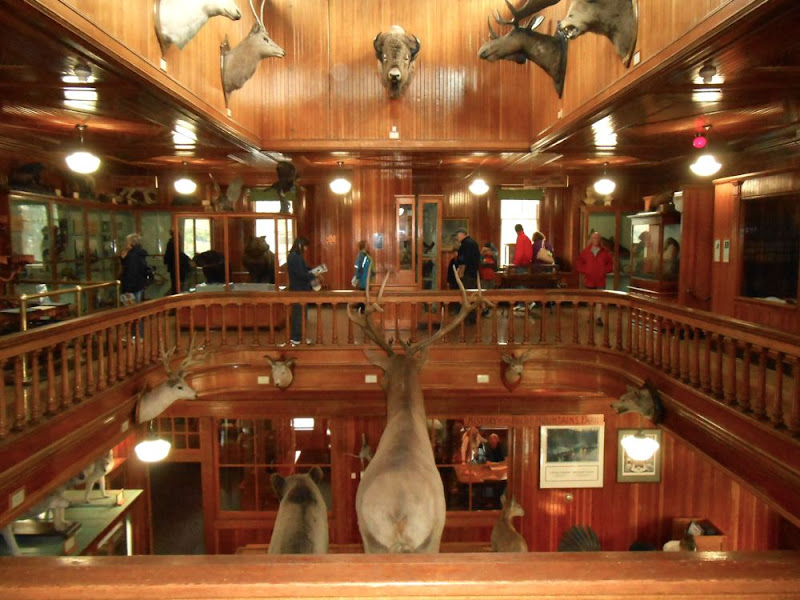 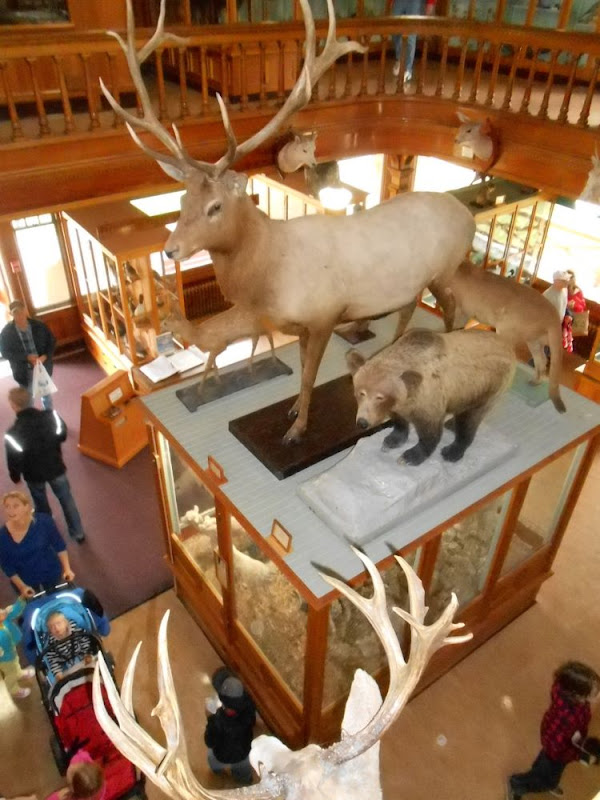 The next three days were sunny and bright. Exploring the roadways to and from the sights around the area gave us many chances to see some of the animals. Below are a few. We never saw a moose or a grizzly. Disappointing. But the momma black bear and her cub near the road were fun to see. She was turning over large rocks in search of some good things to eat. Junior didn’t seem impressed. 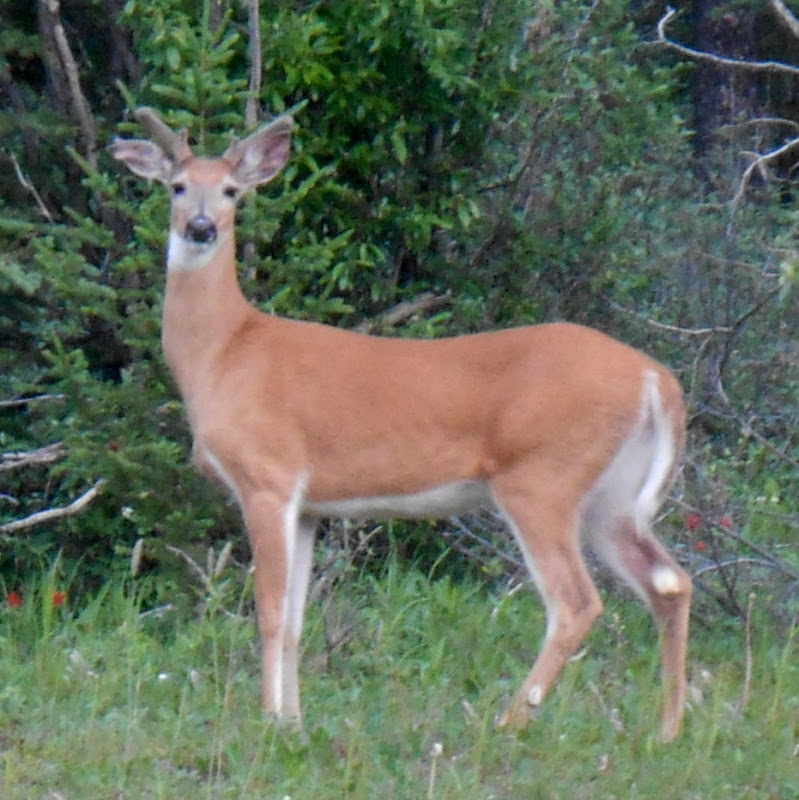 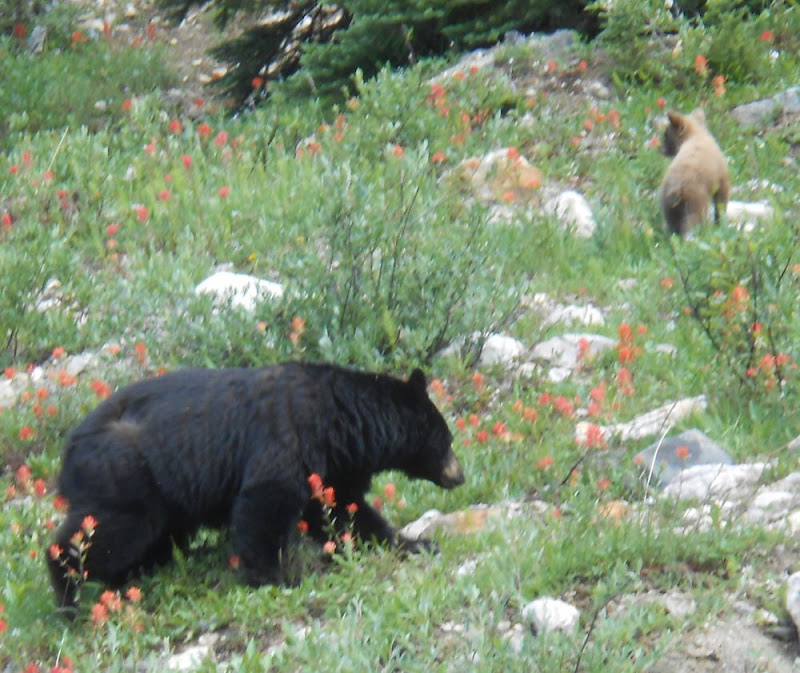 Many sheep and goats were seen in a few places. Note how they are losing their winter coats and look shabby. 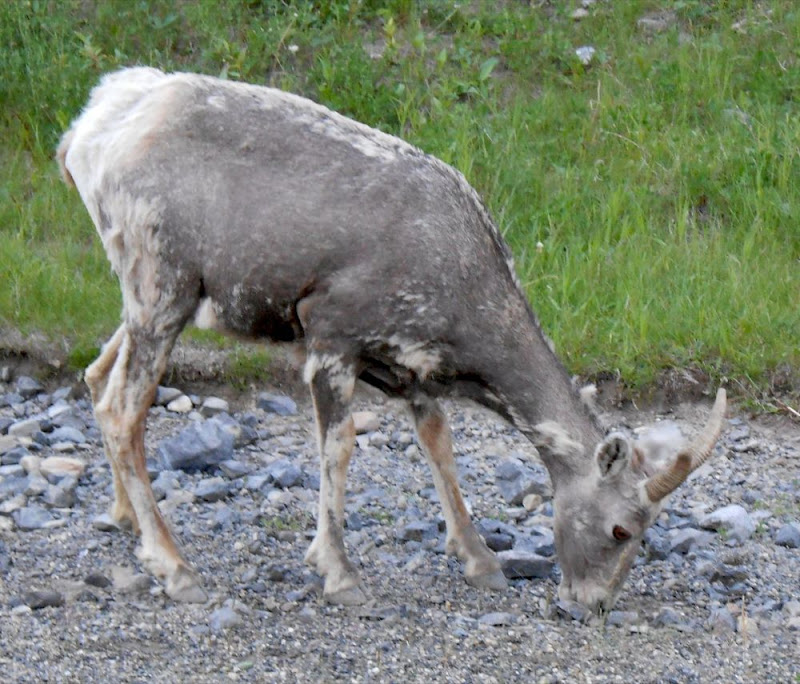 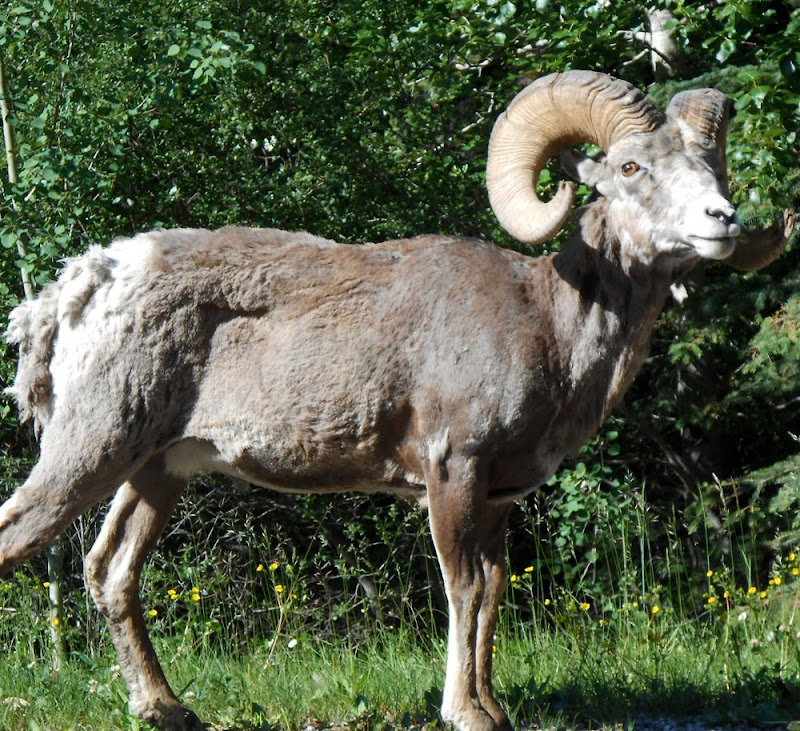 Major highways like Trans-Canada 1 have special animal crossings built every few miles. Tall fencing along the highway discourages the animals from crossing just anywhere and guides them to these particular structures.

We headed north to see glaciers along the Icefields Parkway toward Jasper. Our hosts said to stop at Johnston Canyon and hike to the Lower Falls. We got there early enough in the day to avoid crowds. The half mile trail went along the steep walled canyon on the ground when it could. At times, the only way was on a trail attached to the wall of the canyon. Nothing below for 30-40′ was a bit unnerving at times. 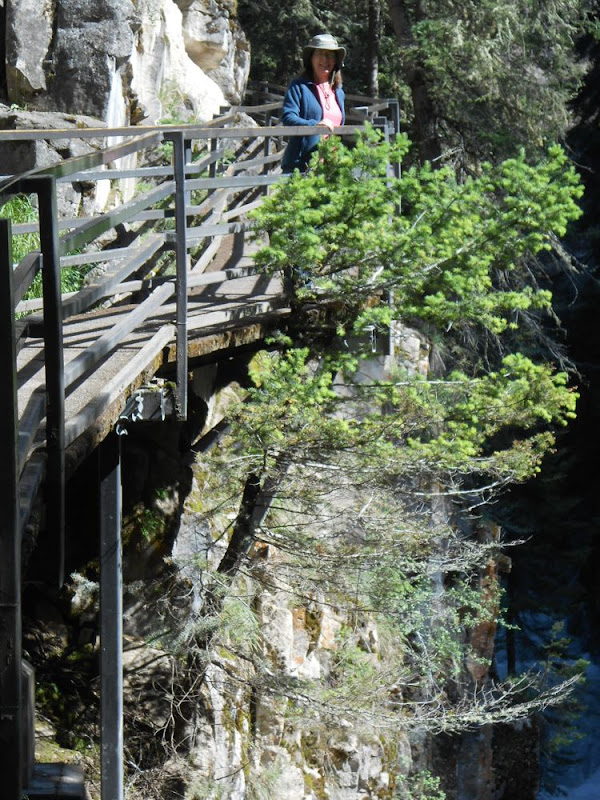 The hike was worth it. Water rushed through the cataract down to a large pool. Trees and branches were stacked from high water due to the recent heavy rains. 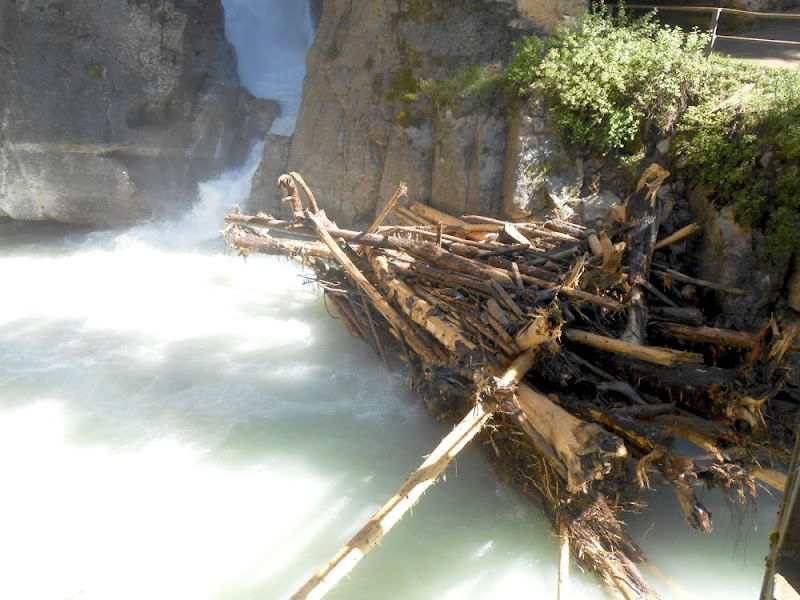 We proceeded farther north. Around each bend there were high mountains with remnants of glaciers attached. Sadly, the glaciers are receding faster that the current models predict. The US Geological Survey says of the 150 glaciers in 1850 in Glacier NP, there are 25 remaining with a size of over 25 acres as of 2010. These moving rivers of ice are magnificent. They won’t last much longer. 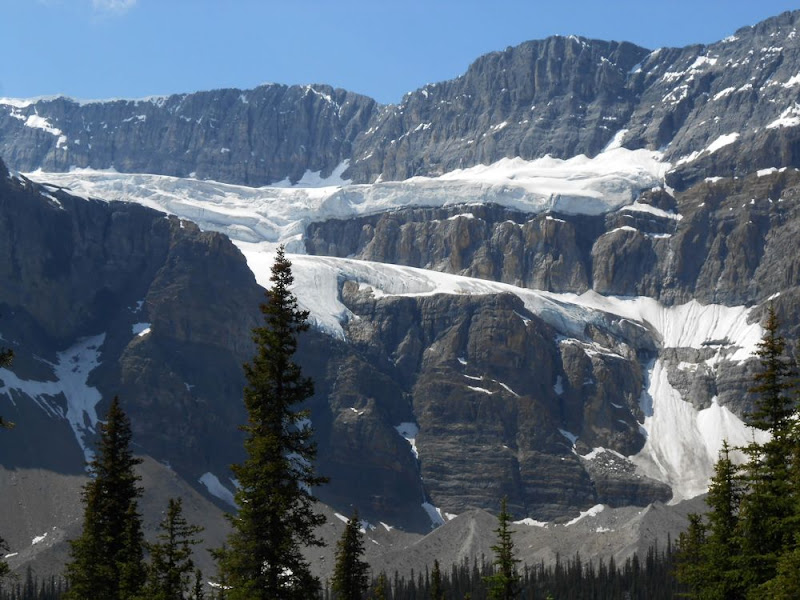 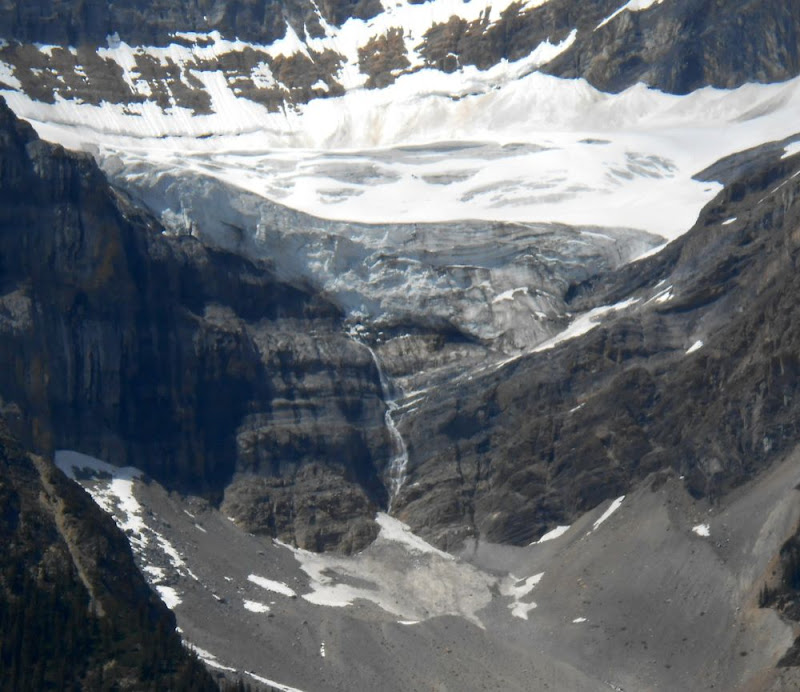 As we headed back south in the middle of the afternoon, we stopped at Lake Louise, one of the premier vacation spots in North America. We were hungry, too. With the car parked under the hotel, we found the bistro where we could get a late lunch early dinner. Outside the window was this view. People from all over the world were walking, canoeing, kayaking, or just sitting in awe. 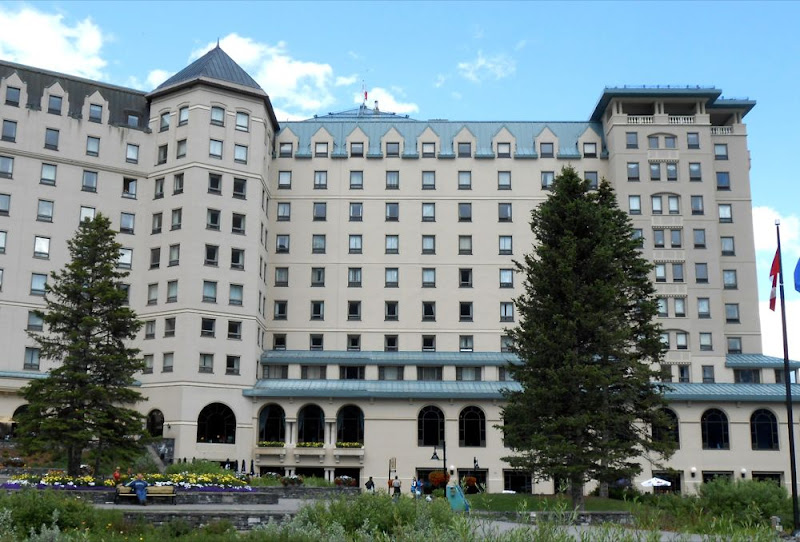 The flowers were abundant here and along the trails where we hiked. Here are a couple of tiny ones no more than a half inch wide. Nature’s beauty can come in large sizes as with the mountains, or small sizes as with these delicate flowers. 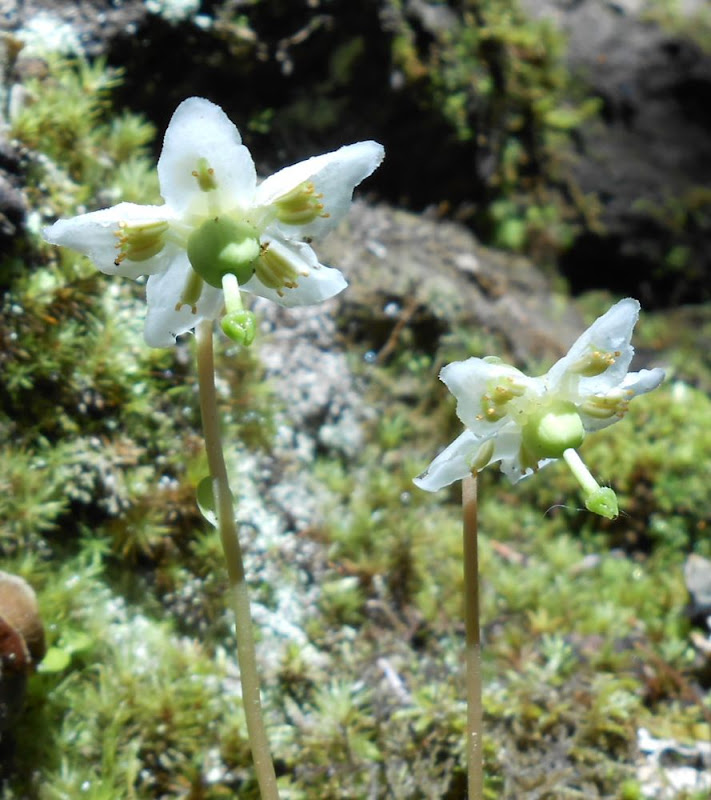