Between travel time to get there and days to soak in the sites, some of the wonders on our own continent require extended holidays to appreciate them. In the last few years we’ve had more time to travel than we had before, allowing us to enjoy Yellowstone and Grand Teton parks in Wyoming, as well as the Grand Canyon and Hoover Dam in the southwest.

More than a year ago we began talking about visiting Glacier National Park in Montana. If we were going that far, we would go “a little” farther and travel into Alberta, Canada, into the Banff National Park area. From our town, it’s more than 20 hours’ of driving time to get to Glacier. We know our limits, and decided to fly most of the way, and then to use a rental car to get around.

On July 3 we left Iowa, this time to national parks of the northwest. We flew into Spokane, WA. It’s possible this wasn’t the best choice, and we’d encourage travelers to check other airports for ticket prices. However, it ended up working out fine for us.

Because of the two hour time zone change, from Central to Pacific time, we arrived late morning. After a stop at a Cabela’s sporting goods store to buy hiking poles, we made our way across Idaha and into Montana, arriving through the west gate of Glacier in the early evening.

We checked into our motel, the Village Inn at Lake McDonald. The building is older, the units unimpressive both outside and inside. Ours had a kitchenette, which we did not use. 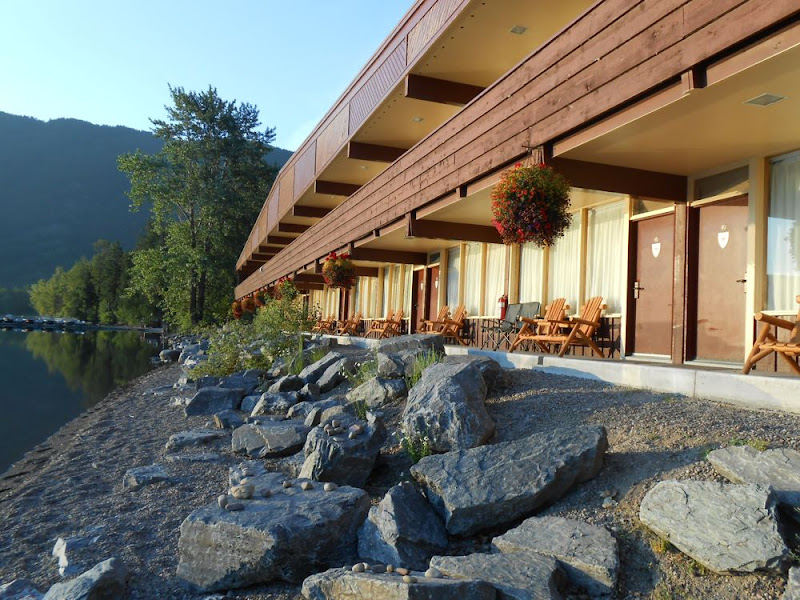 If you ignore the building, however, and turn around, the vista is more impressive! This, literally, was the view from our doorway.

The next morning Jim captured the sun rise over the peak of the mountain. 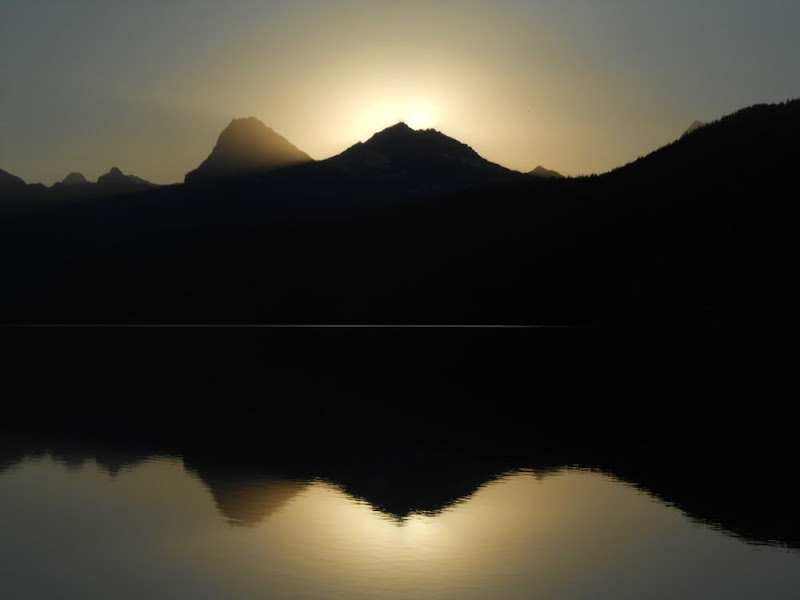 After the sun rose, a mist settled for a short time, giving a more ethereal look. 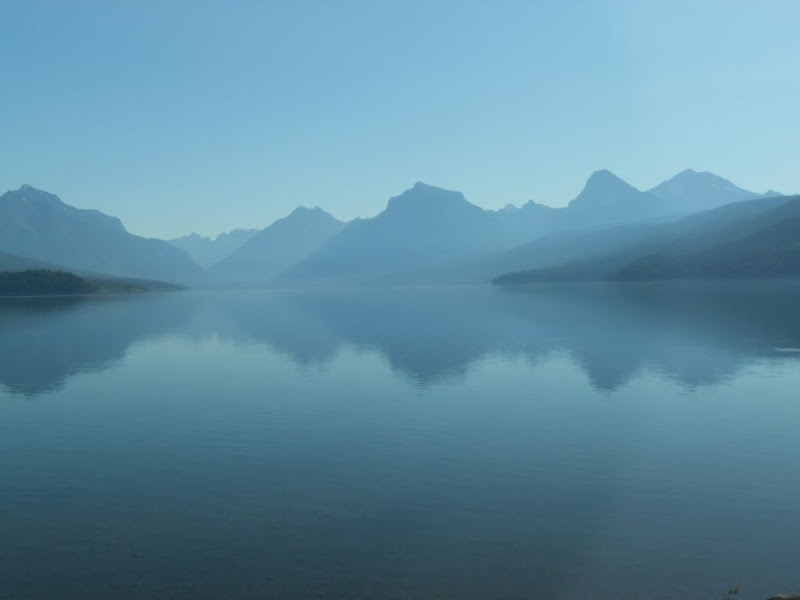 We headed out after breakfast. There is only one road that crosses the park, called the Going to the Sun Road. Most years, the road isn’t fully opened until mid-June or later. This gives opportunity for most snow melt and avalanche danger to pass. This year, the road opened on June 21.

The road runs along Lake McDonald on the west side, climbing and winding along mountain ridges. The majority of it is two lanes. No long (trailer) vehicles are allowed, and the speed limit ranges from 25 to 45 mph.

There are many trails off of the road. One of the first on the west side took us to this rushing river and waterfall. 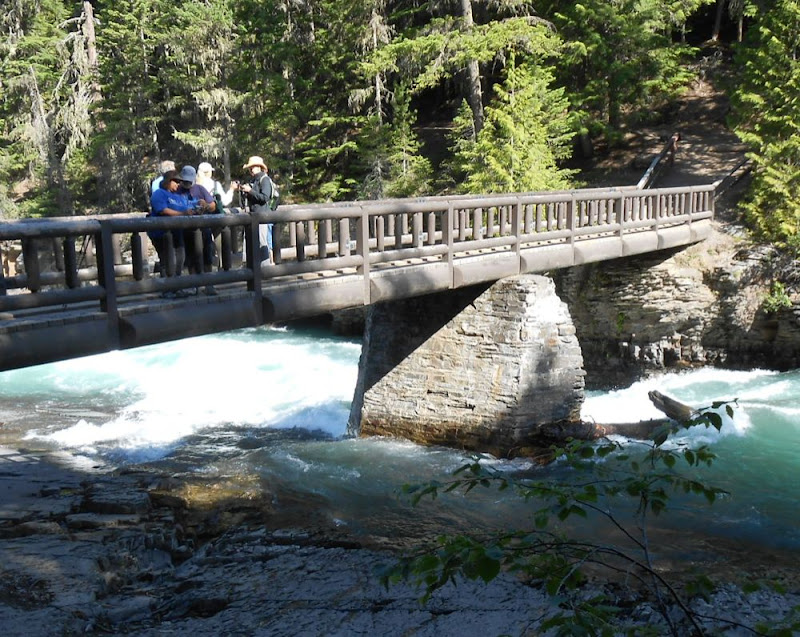 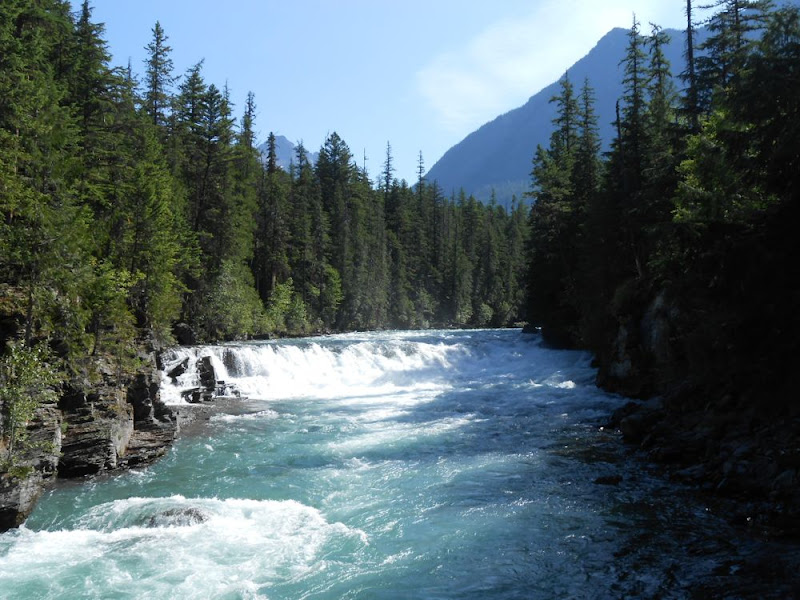 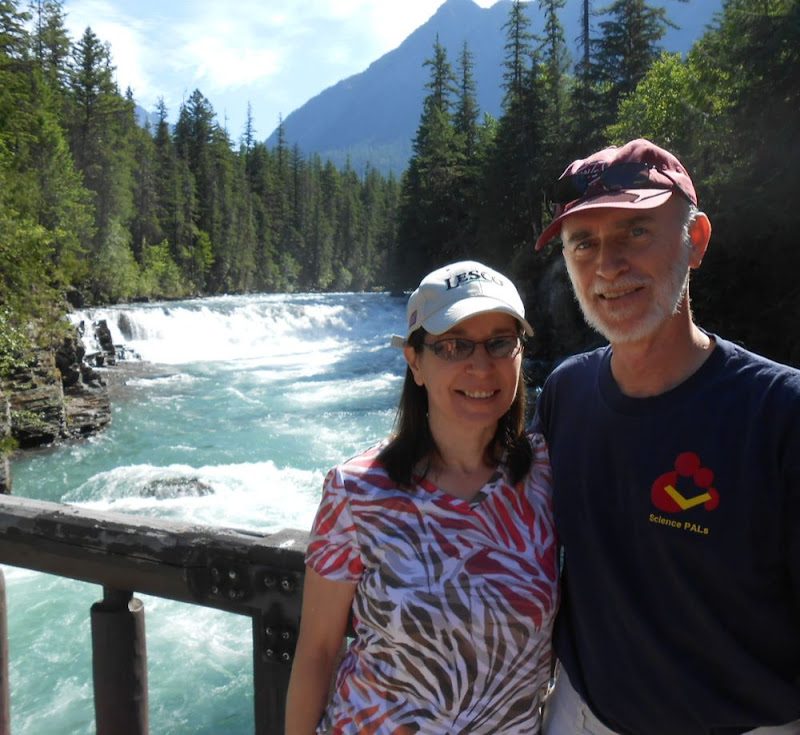 Next we stopped at the Trail of the Cedars. There are two trails off this trailhead. The Trail of the Cedars is relatively flat and offers some wheelchair accessibility. Extending from there, the trail to Avalanche Lake is moderately difficult, sometimes steeply uphill along a river gorge.

We were fascinated by the cedars and other trees. A cottonwood nearby was hollow and large enough to stand in. 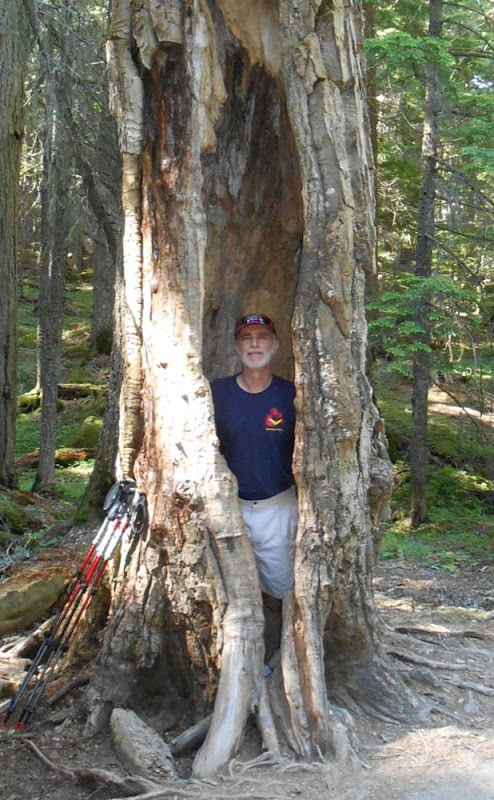 The cottonwood’s bark was several inches thick, deeply gnarled. Even with Jim’s hands, it’s hard to get perspective on it.

As we headed up Avalanche Lake trail, Melanie had to stop near her friend, the big rock. 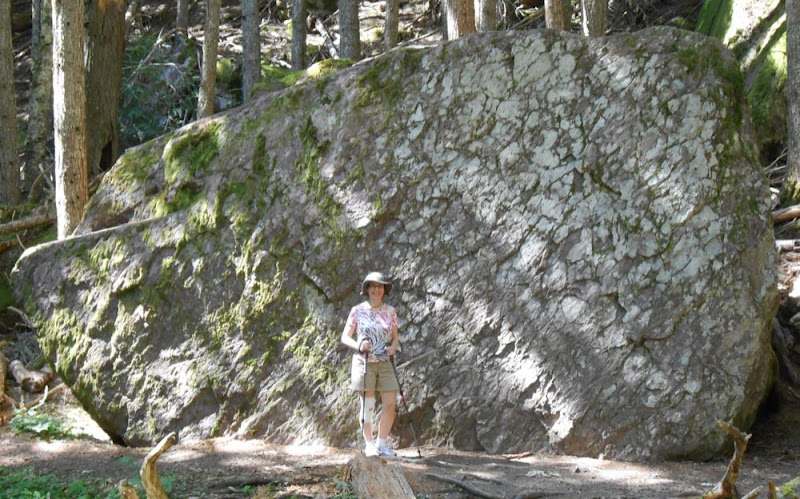 We continued along Going to the Sun Road on our way to the east side. Photos can’t capture the expansive beauty. 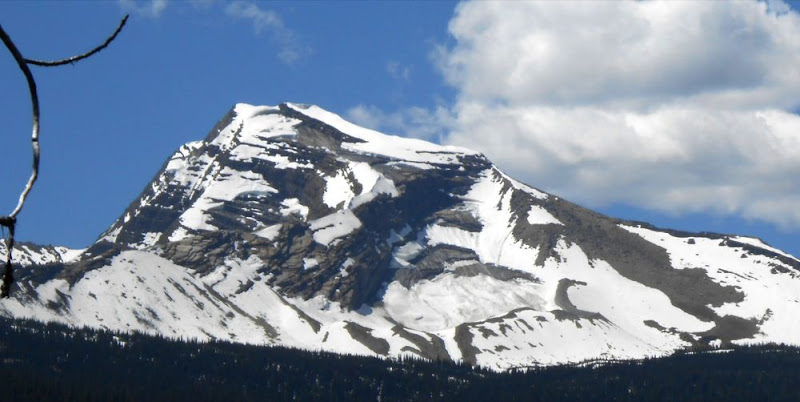 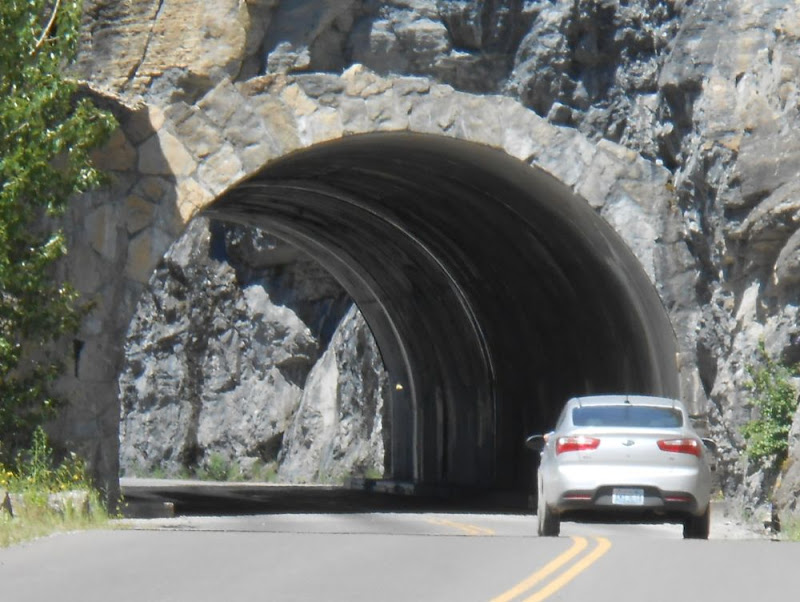 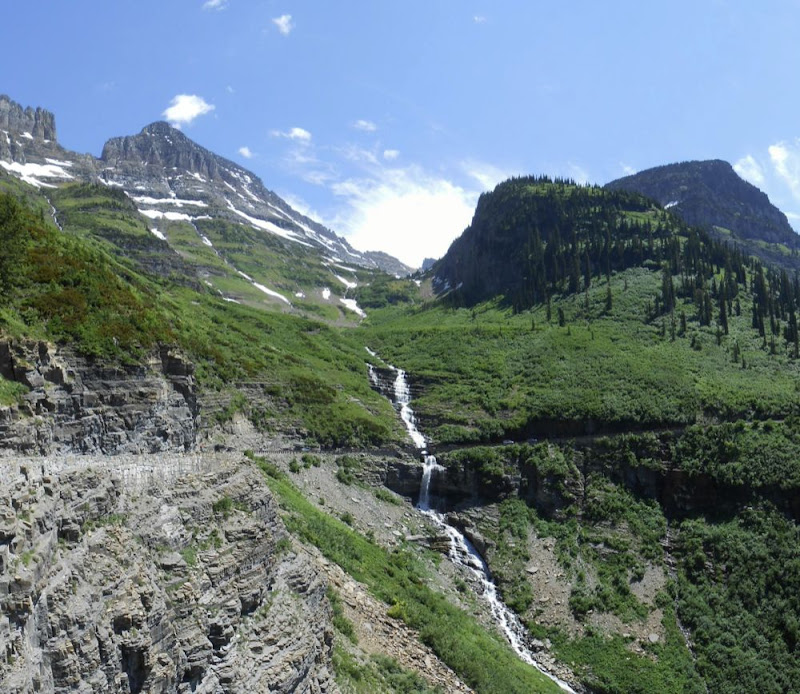 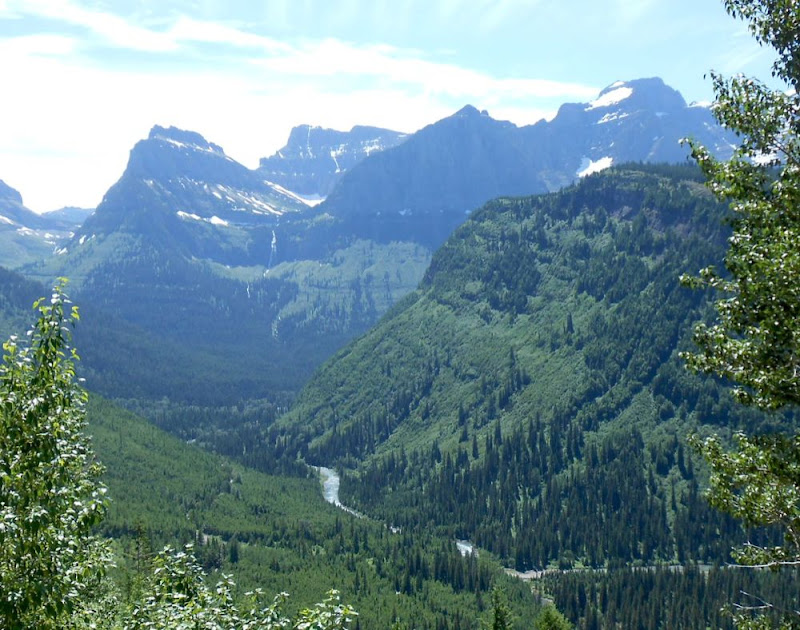 Along with glory in the large, there was glory in the small. Wildflowers dotted every view, in colors ranging from palest cream to vibrant red. Purples and blues, pinks and oranges showed among grasses and rocks, along roads and rivers. 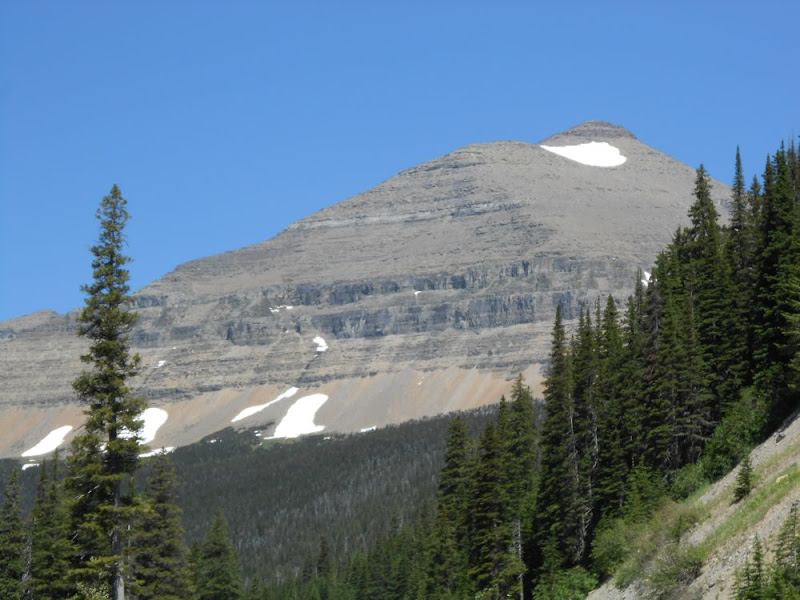 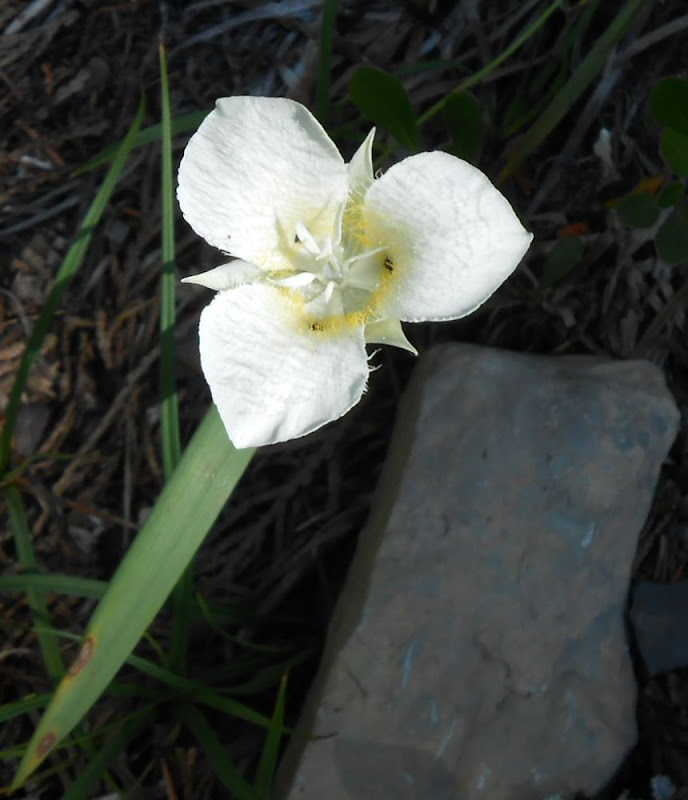