That Thursday morning, Independence Day, we celebrated in one of the magnificent parks in our great nation. The breathtaking scenery, and sometimes breathtaking hairpin turns on the Going to the Sun road, kept us moving toward the east side of the park. The other three nights of our stay were at the Rising Sun location. 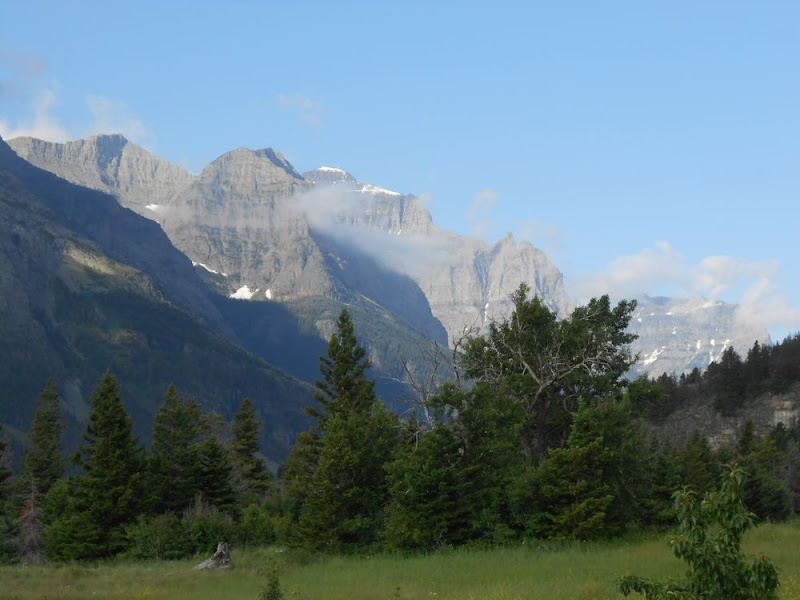 On the mountain side south of Rising Sun, pockets of snow still clung in the crevices. This snow patch created a shape that looked like an airplane to us. 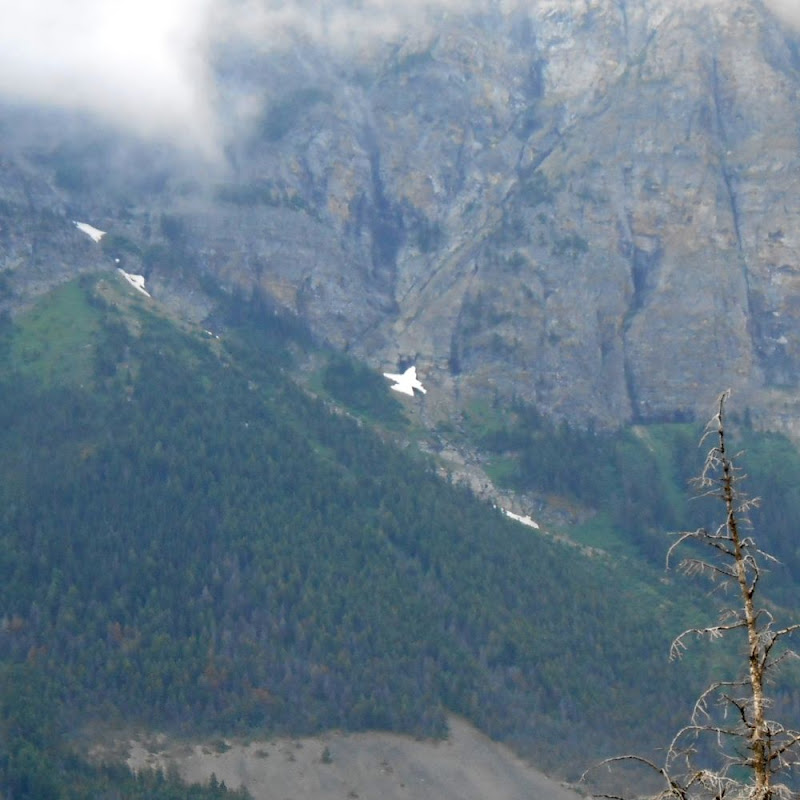 From the parking lot at the visitor center, the red buses filled with passengers to tour the park. Many people prefer to have someone else do the driving so they can concentrate on the scenery.

As the sign says, Logan Pass is on the continental divide. It’s also approximately in the center of the park. There is a visitor center here, and a trail to Hidden Lake behind the building. 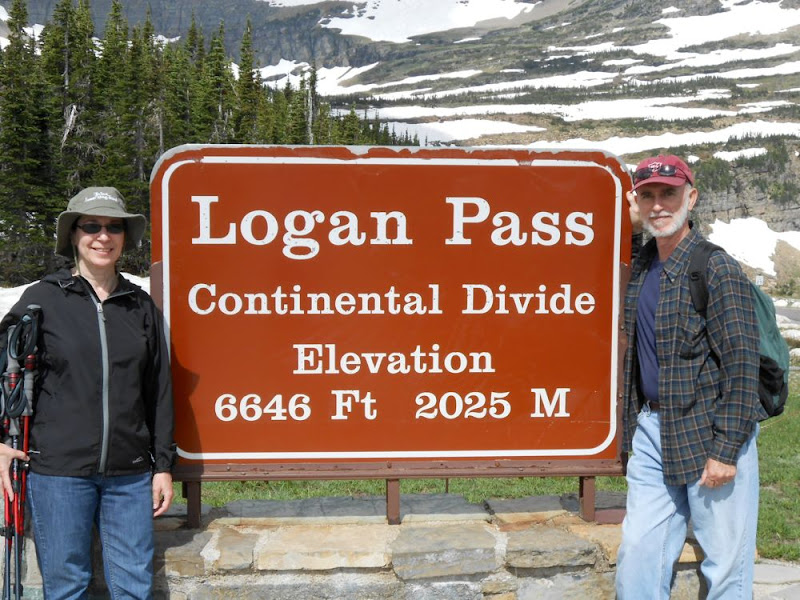 The trail is built of boardwalk, but much of it was still covered in snow. 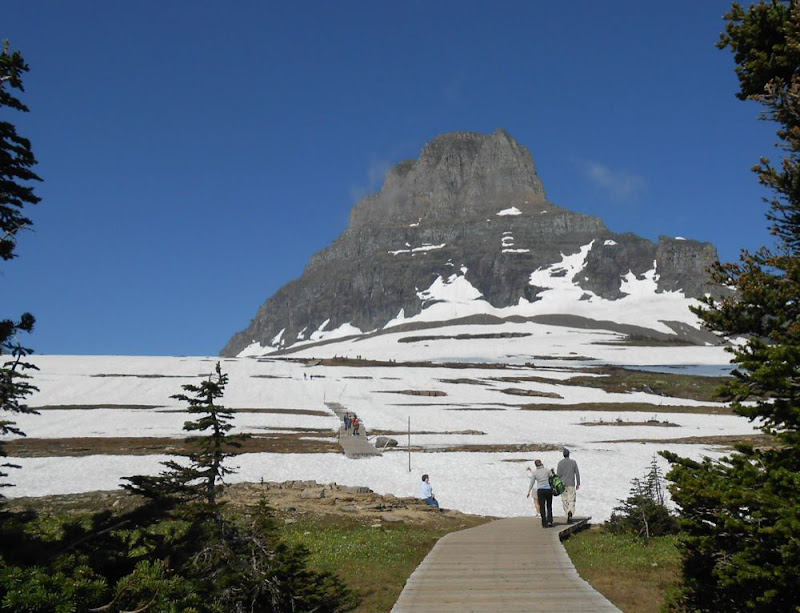 The mountain goat was barely annoyed at our presence. 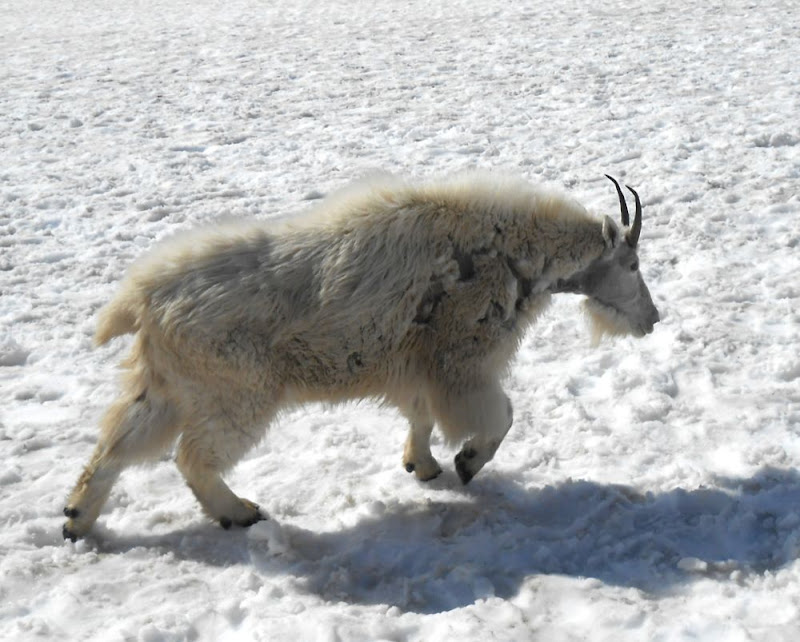 We didn’t get as far as the lake. The snow was slushy and slippery, with very poor footing. We gave up after agreeing we were not having fun. Still, the views were wonderful. 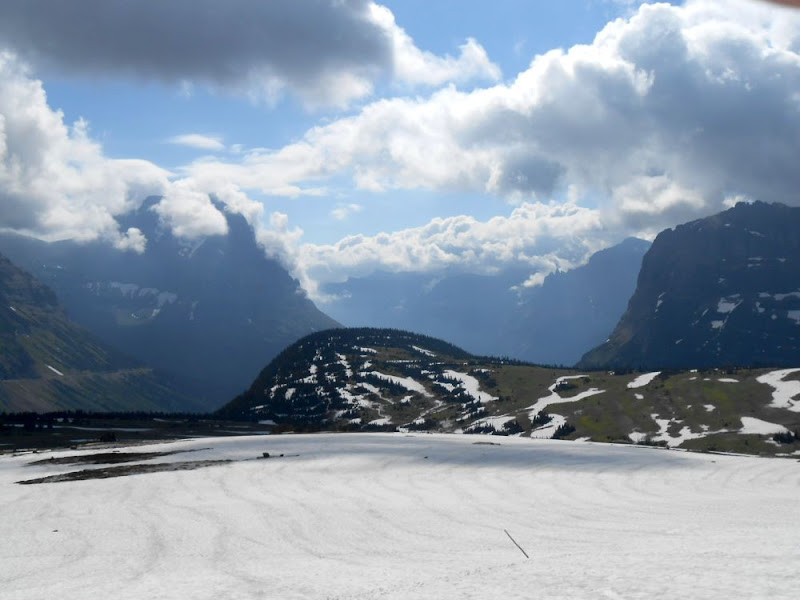 Feeling somewhat defeated by the slushy Hidden Lake trail, later that day we enjoyed serendipity. At a stop east of Logan Pass, a split in the mountain lets sunshine through as well as an icy stream. Appropriately the split is called Sunrift Gorge. Racing around a 90 degree turn, the water plunges down rocks and under the roadway toward St. Mary Lake. 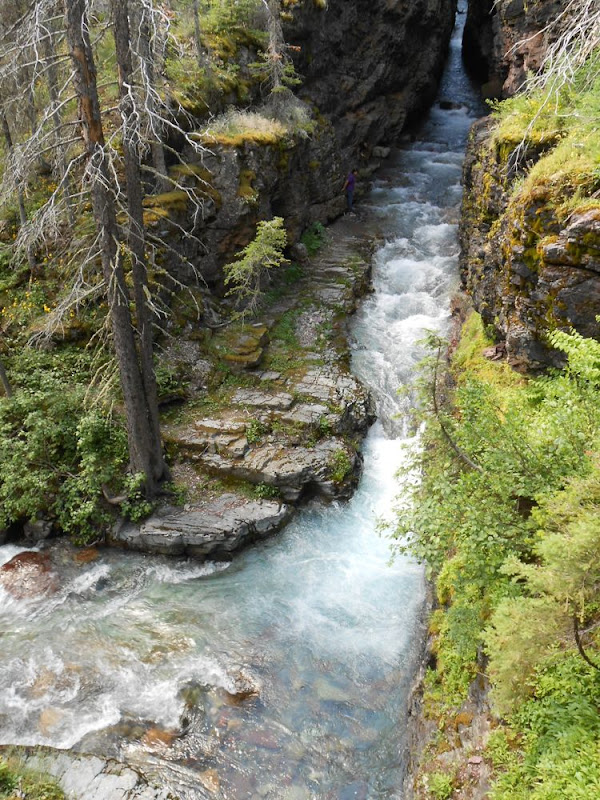 A trail below the road led us downstream.

Parts of the trail were quite narrow. At the bottom, this wooden footbridge crossed the stream… 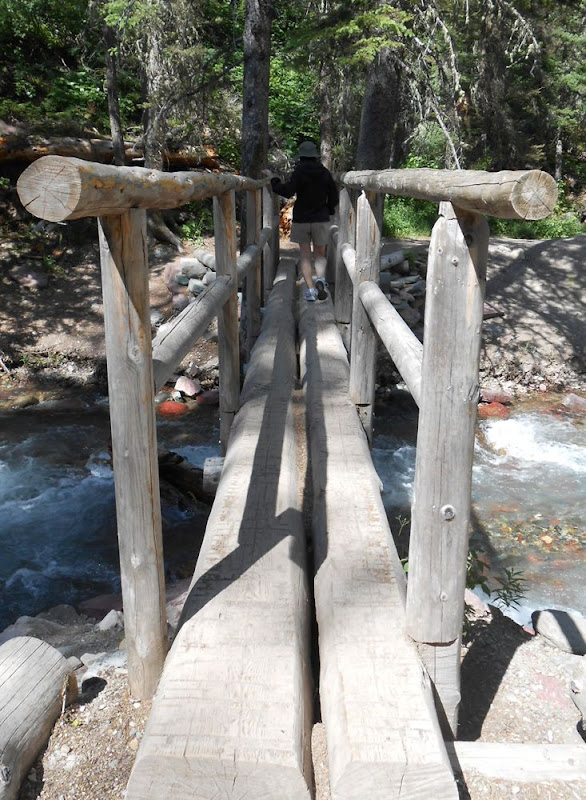 and showed us where all that water tumbled over a ledge at a place called Baring Falls. 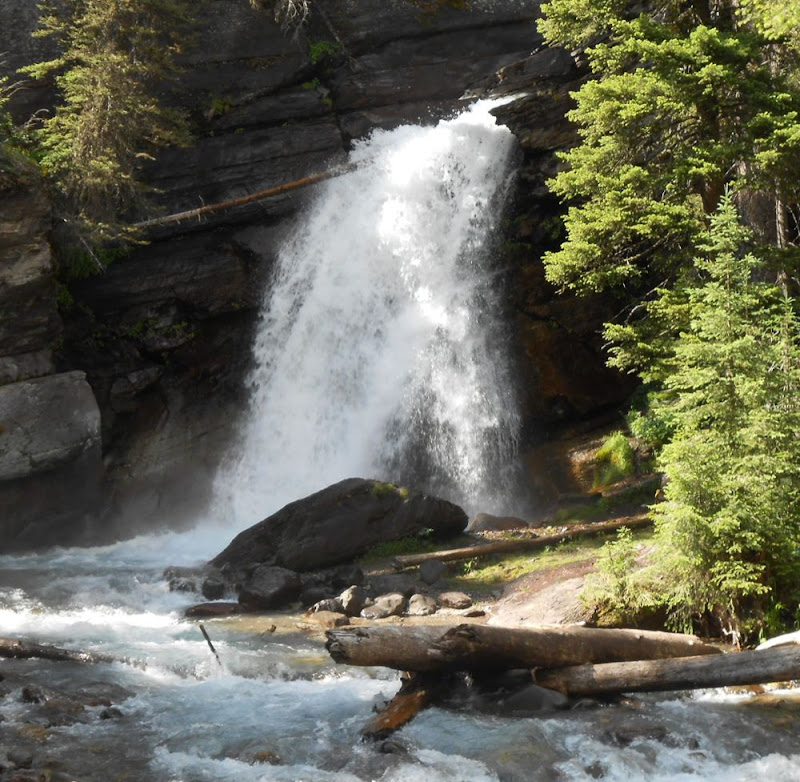 We arranged to take a boat ride the next morning on St. Mary Lake. It’s a lake carved by ancient glaciers and still fed by snow and ice melt off the mountain sides. In the middle is a small island, a mountain top itself, called Wild Goose Island. As you can see, it’s just large enough for a few trees. 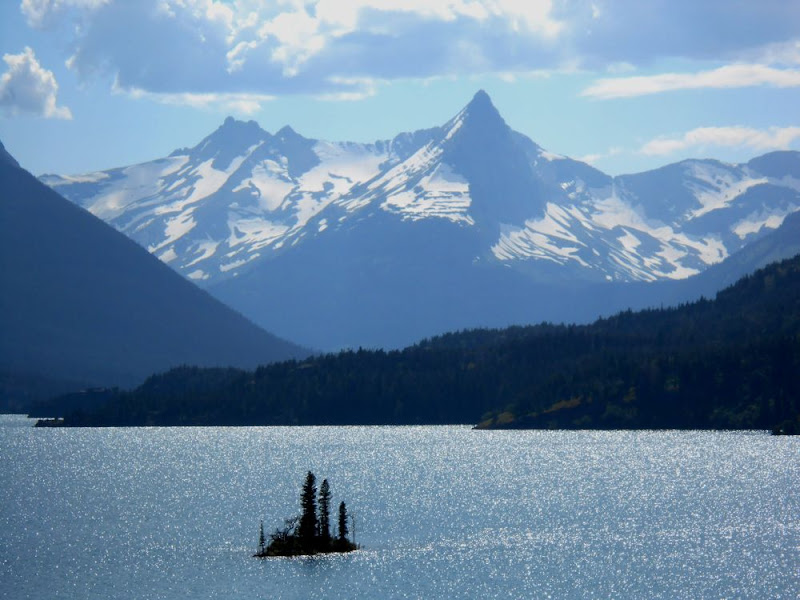 Few boats use the waterways in the park. This boat launch hosted two passenger vessels run by the park’s concession. 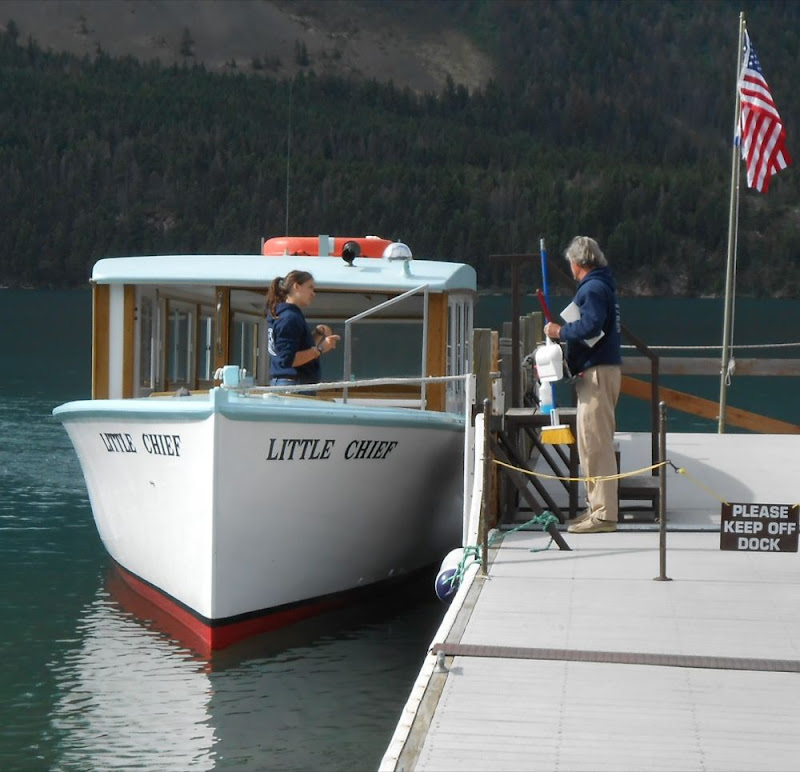 Erin, our able captain, is a nursing student in Wisconsin. Even with the walking cast you can see, and the heavily wrapped finger you can’t see, she guided the boat with skill, including docking it by herself. 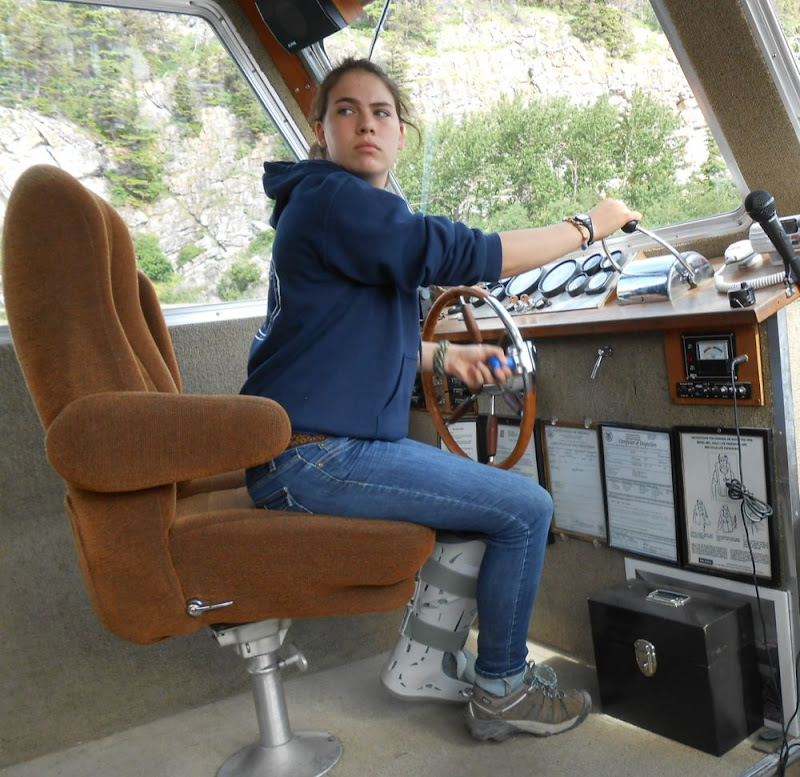 Joshua, the park naturalist who joined us, was in his first weeks at Glacier. He spent last year at a national park in Alaska. New to the park, he occasionally turned to Erin to correct him or confirm his narration. About halfway through our boat ride, the boat docked and let us off. 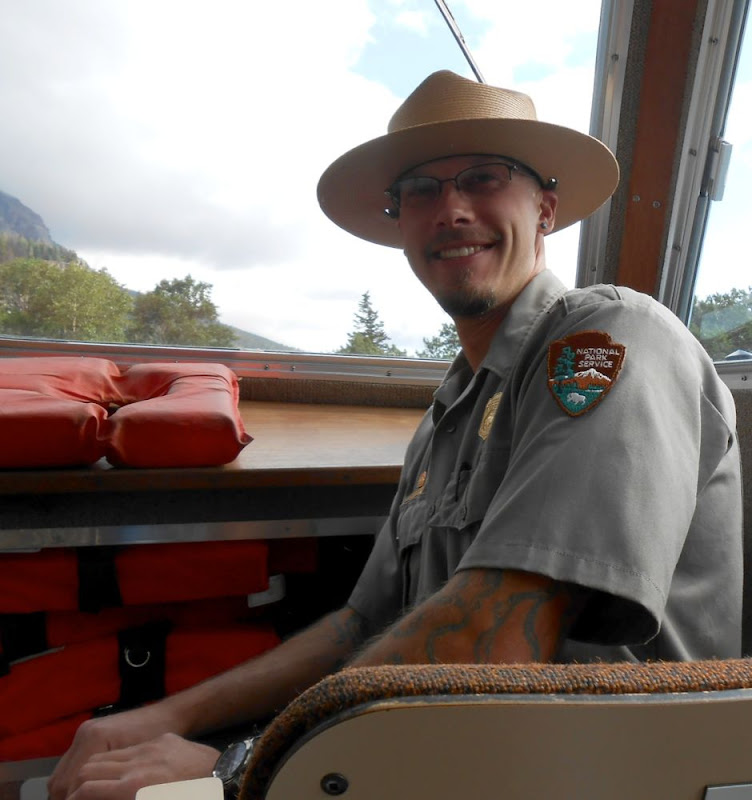 From there Joshua led us on a very short walk to the same Baring Falls we’d already seen, as well as St. Mary Falls. 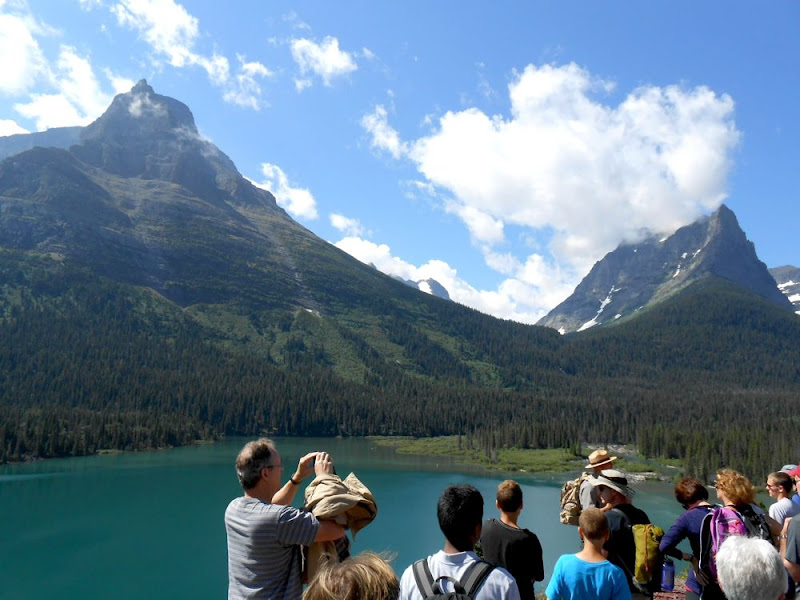 St. Mary Falls was more than a mile from our landing point 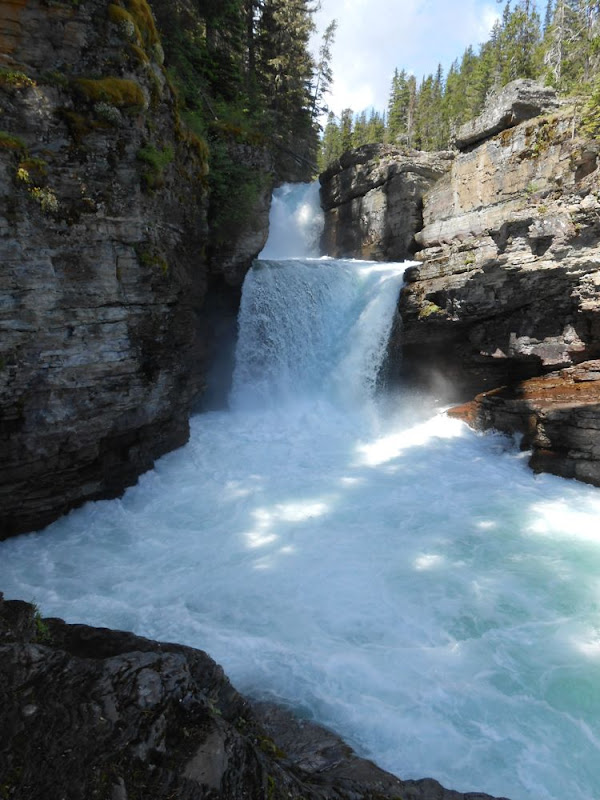 and worth every step to get there. 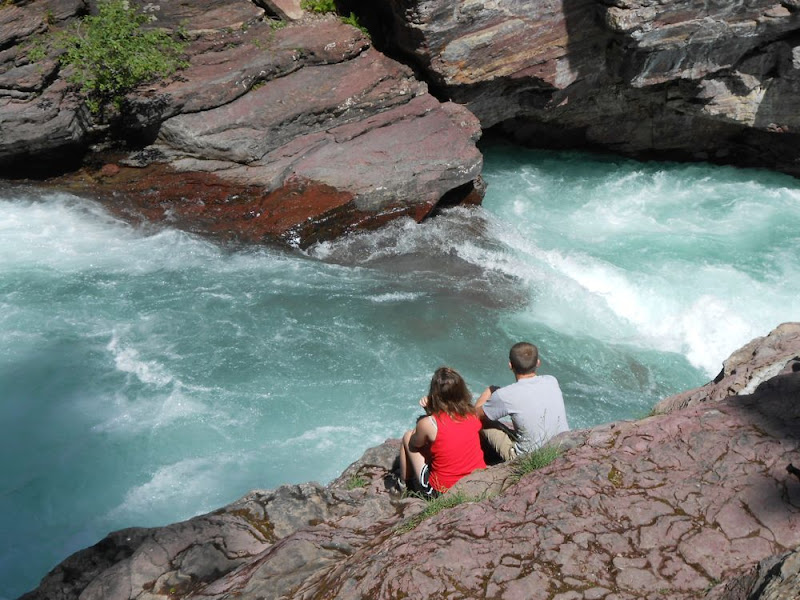 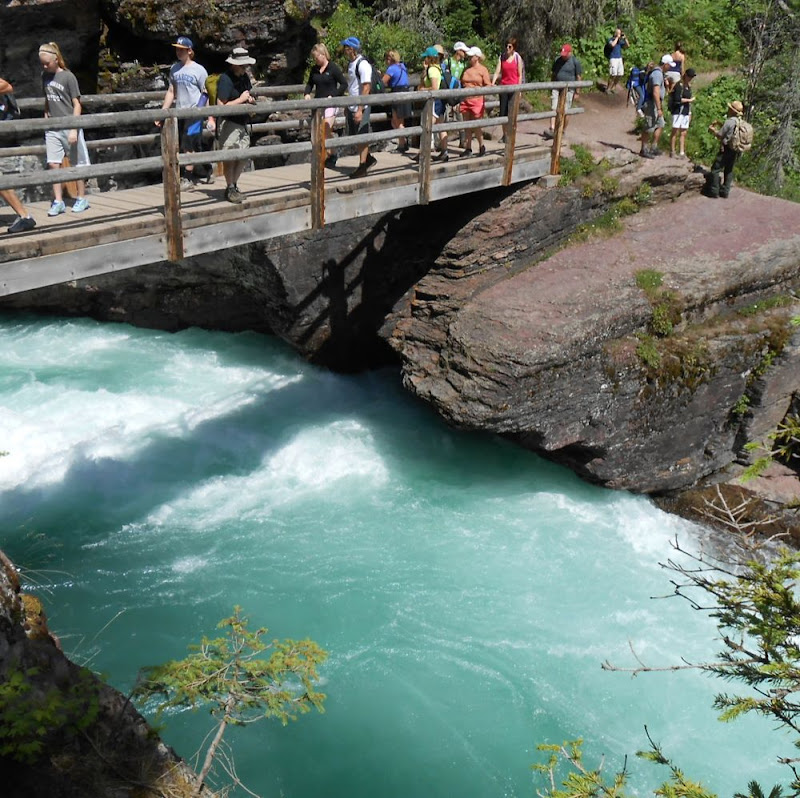 even among so many others.

The boat ride back to the launching dock showed off the brilliant orange lichen decorating much of the rock. Notice the scale of the cliff as compared to the trees at the bottom. Note, also, the tilt of the rock strata. In the park it varies from horizontal to vertical from one mountain to the next. 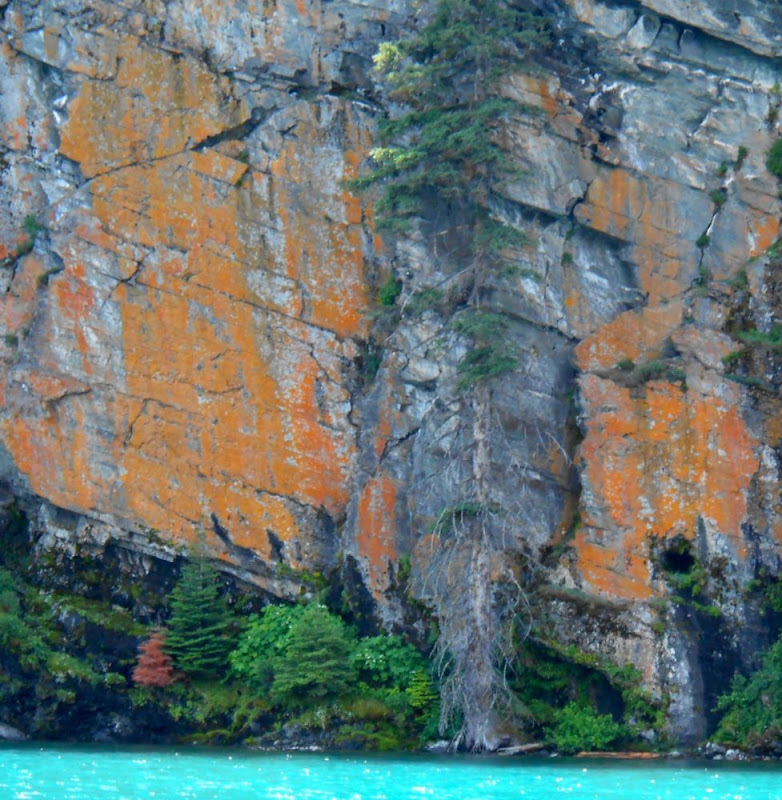 A close-up of pale green lichen next to the orange. 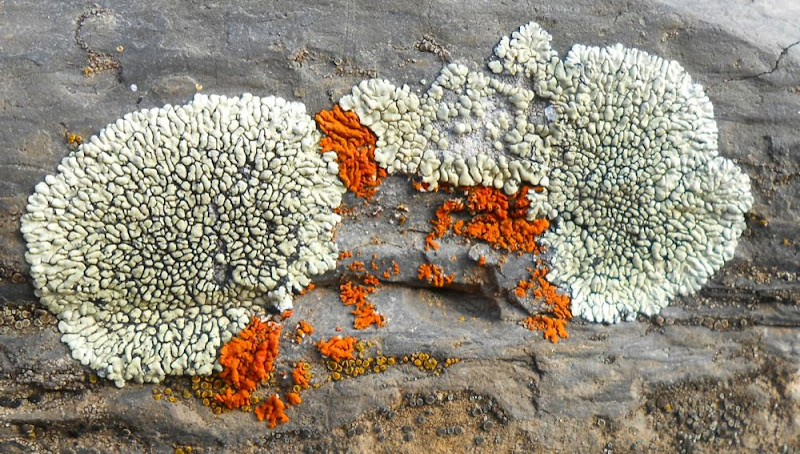 Snow fields next to Going to the Sun road. Signs at these patches of snow warned people to stay off. It was unstable and could easily break with risk to your life. 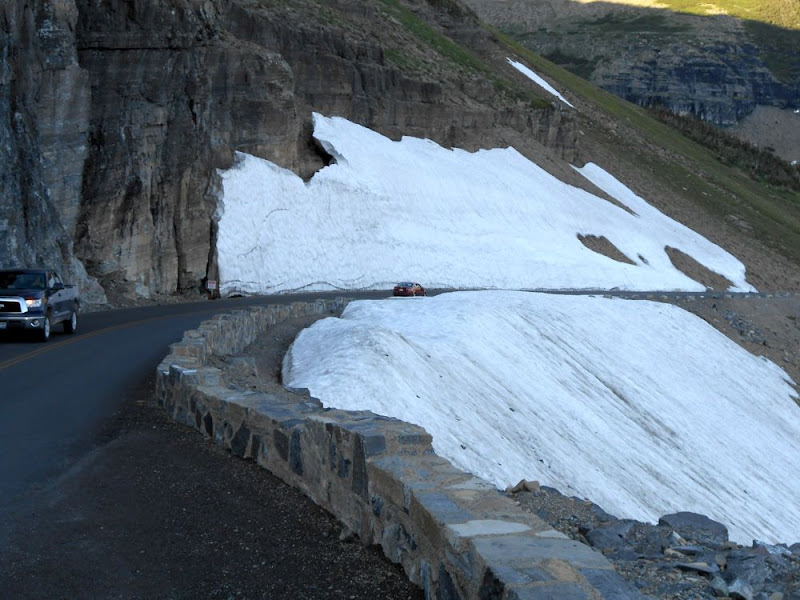 The bowl of the valley carved out by eons of large glaciers in the past. 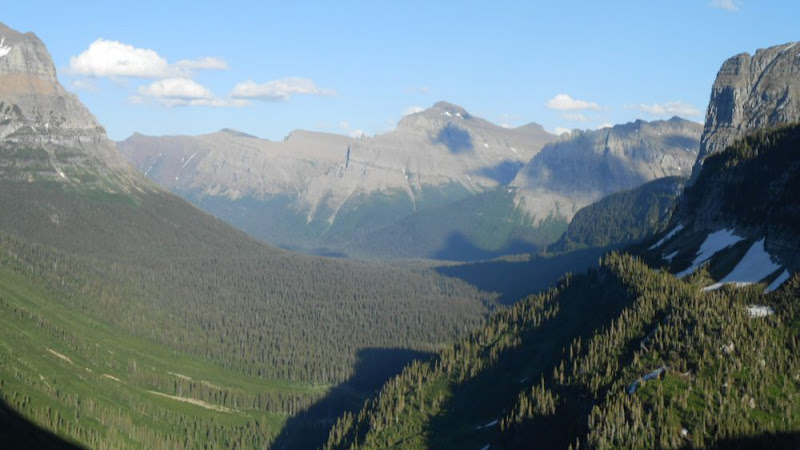 Rising Sun has a beautiful picnic and hiking area across the road — or so we’ve been told. The area was closed for bears. 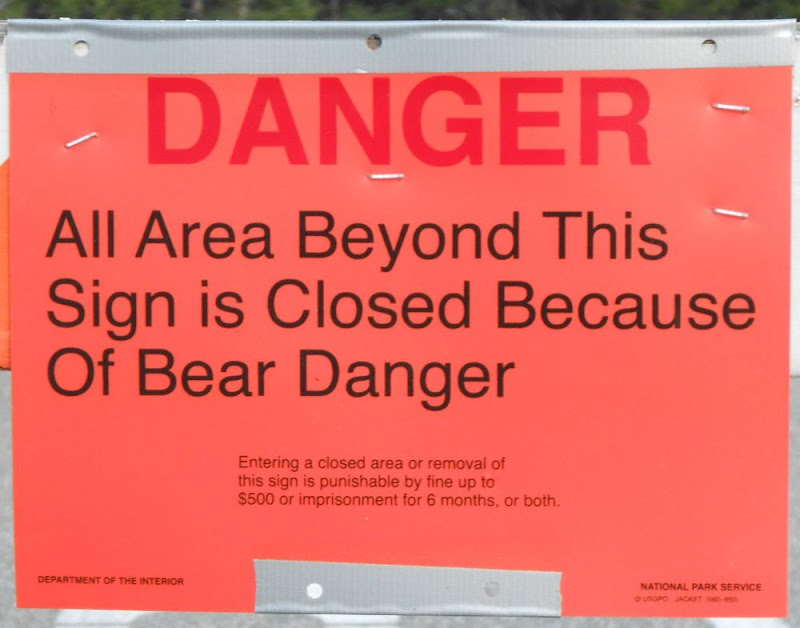 Small beauties in a park covered with delicate flowers, such a contrast to the massive mountains and towering trees. 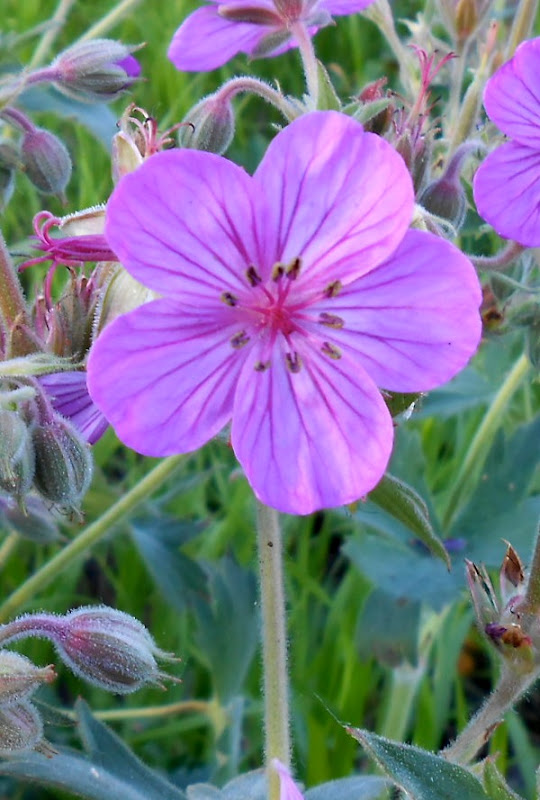 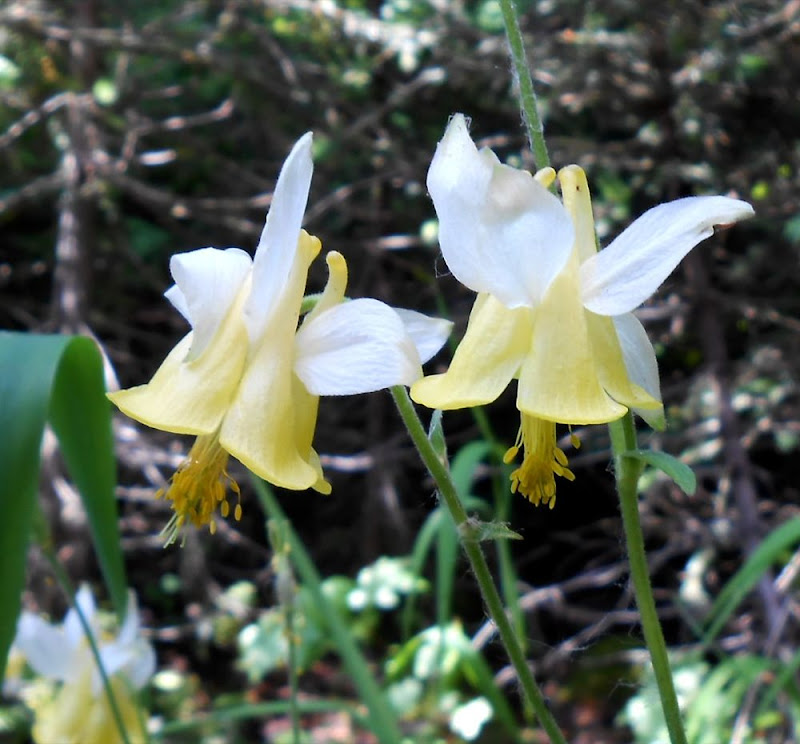 We hope you enjoyed the park with us. When we left there, we headed north to Canada.