For many people, their strongest association with Peru is Machu Picchu. Legendary “lost city” of the Inca, it was revealed to the public in 1911 by Hiram Bingham. As a professor at Yale University in South American history, he organized an expedition to Peru to find the last capital of the Inca. Led by local guides, his crew arrived at Machu Picchu, a largely forgotten site.

The world knows now that Machu Picchu was not the last capital, and that others likely arrived at the mountain city before Bingham. He still deserves credit for the movement to reveal the vine-covered community at the edge of the jungle. Excavations he led over the next three decades exposed a magnificent city that continues to baffle the imagination.

(If you’d like to read more from Bingham himself about the discovery, check this book, provided by Project Gutenberg.)

Our ascent to Machu Picchu was easier than Bingham’s. From our lodging in Urubamba in the Sacred Valley, we traveled by bus  to Ollantaytambo, where the highway came to an end. (The photo at the left shows Urubamba above the center, Ollantaytambo to the upper left, and Aguas Calientes in the upper left corner. Click the photo to open it in a new tab.)

In  Ollantaytambo we boarded a train with comfortable seating and a pleasant crew, serving tea and snacks. The train proceeded through the valley to Aguas Calientes, a small town nestled between peaks and fed by natural hot springs. It is the town closest to Machu Picchu, busy with hotels, restaurants, souvenir shops, and markets, and it serves as the access point for most tourists to the mountain. Here is a short video to give you a notion of the town.

From Aguas Calientes, there are two ways to reach Machu Picchu. One is by dedicated bus — the fleet of buses travels up and down the mountain repeatedly throughout the day. The other is to hike up. Our group, with trip leader Walter at the fore, took the bus up the narrow switchback road. Here is a brief video of part of that ride.

On site, Walter showed us some of the wonders. His depth of knowledge allowed us to grasp a tiny understanding of Inca history and the use of Machu Picchu as a city. The walls, built without mortar, include both small-stone work as well as large stones. The large ones, intricately fitted, are believed to have been used for structures of great importance such as religious buildings.  The small stones were used for more ordinary terracing and residences. Click on any photo to open the gallery and view larger.

The doorway shows how thick walls are between rooms. 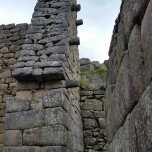 The post-like things along the roofline are stone, not timber. 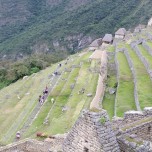 Terracing. The terraces were used to grow crops.

Llamas have the run of the site.

Inca astronomy was used to track the seasons and study the stars. These sacred buildings and others were built with large boulders, carefully carved to a tight fit, with no mortar. Click on any photo to open the gallery and view larger.

The curved structure on the right was used for solar observations. 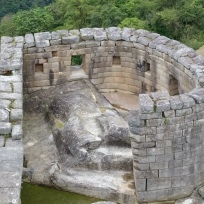 Sun rays enter the small window at the center, on winter solstice. 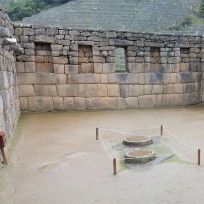 The two circles on the floor are reflecting pools, thought to have been used for astronomy.

Temple structure. The wall collapse is due to erosion. 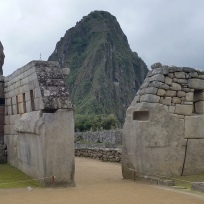 Along the right side of the temple. 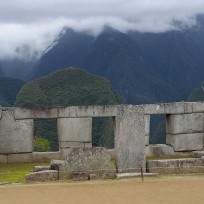 Three windows in a sacred building. Three is a special number.

In the distance we often caught sight of Huayna Picchu. “Huayna Picchu” means “Young Peak” in Quechua, the Indian language. 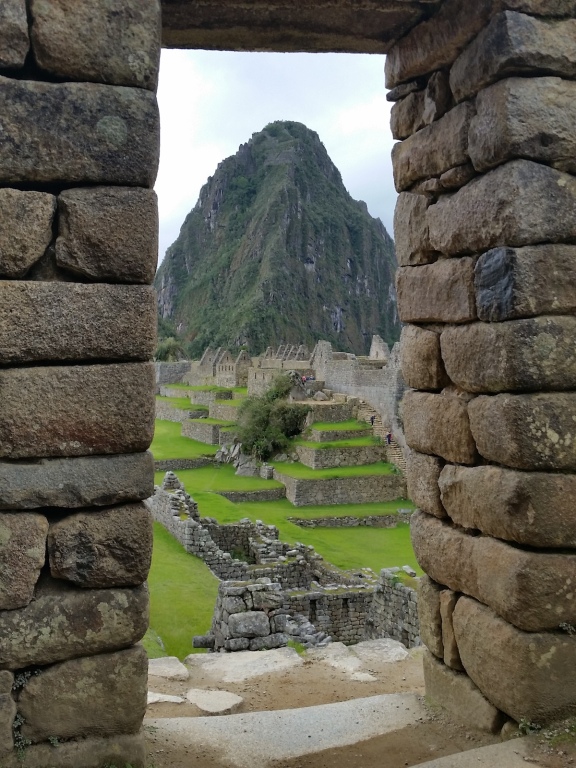 As we neared the end of our exploration at Machu Picchu that afternoon, drizzle began to fall. We all took ponchos out of backpacks and covered ourselves before it rained somewhat harder. We’d been lucky so far, but the rainy season was just beginning. What would the next day bring?

The next morning broke, and four in our tour group joined Wilson after an early breakfast. Walter was our primary trip leader, and Wilson was a local guide. When we met Wilson the day before, he was wearing a ball cap made by the Wilson Sporting Goods company, with the company name displayed. When Jim asked if “Wilson” was really his name, he showed us his name badge. Indeed, he was Wilson! He explained that his mother named him after Woodrow Wilson. He also has two brothers, one named “Eddie,” for Eddie Murphy, and one named “Jones,” after Indiana Jones.

Wilson escorted us back up the winding road to the gates of Machu Picchu, where we entered again. This day’s objective was to hike the Sun Gate Trail. In the days of the Inca, it was the primary entrance into Machu Picchu; today it serves as the entrance for those who take the 4-day hike in on the Inca Trail.

The Sun Gate trail climbs from an elevation of about 8,000 ft to about 9,000 ft at the peak. It’s a gradual climb and the trail is mostly smooth, large stones. As we climbed, we had views of the switchback road, and the river and city of Aguas Calientes below us. Click on any picture to open the gallery and see them larger.

The switchback road. If you look carefully, you can see tiny buses as they ascend and descend the mountain.

We could see Machu Picchu, with a wider and wider perspective from higher up the trail. 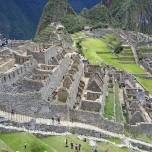 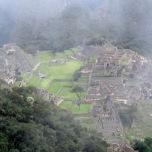 And we had a view of the city with Huayna Picchu in the background. The first photo is broad; the second is the top of Huayna Picchu; the third shows hikers taking a break at the top of a lower nearby peak. 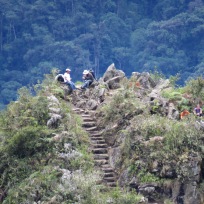 The view from the top is beautiful. Here is a screen capture from a video of climbing Huayna Picchu by Annees dePelerinage on YouTube. 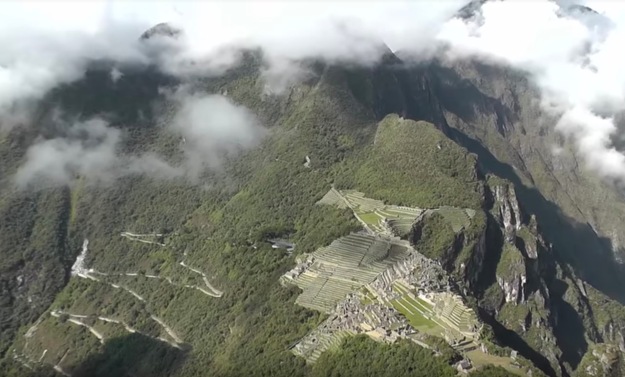 Finally we reached the top, Inti Punku, the Sun Gate. Wilson took a photo of us.

We celebrated reaching the Sun Gate.

Video including some of the views during our Sun Gate adventure.

As we descended, we felt a great sense of achievement. Melanie told Wilson she also felt “un poquito cansado,” or “a little tired.” He smiled and shrugged. “Es un parte del viaje.” “It is a part of the journey.”

The journey has been long, reaching from Melanie’s grade school years when the Inca and Machu Picchu captured her imagination. We still had several stops to make before leaving Peru.