Countless photographs and video clips have been made of Machu Picchu. We did our share. There’ve been many creative attempts to capture the essence and beauty of the place. One of the best we have seen is a collaboration between Destin Sandlin of Smarter Every Day on YouTube and Jeff Cremer of Jeff Cremer Photography, based in Peru.

Jeff set up his Canon camera with a 400 mm lens at a popular vista site above Machu Picchu. The camera system was programmed to automatically take 1920 highly zoomed photos of the site. The system captured 32 rows of photos. Each row was 60 images wide. Each image was 18 megabytes in raw format. It took 1 hour and 44 minutes. Click for more technical details. This 4 minute video will show Destin and Jeff as they got started on this project.

While Destin walked the site, Jeff carefully monitored his camera system. The final product weeks later was a huge file of several gigabytes. You can view it by clicking the image below. It takes you to another website, which makes viewing the large image possible. Best viewed on a desktop computer. Use your mouse wheel to zoom in and out anywhere. Drag the image to reposition.

People moved while the camera system was capturing adjacent images. Later, the software merged the images seamlessly. Sometimes, a person’s head seemed to float magically in the scene. Here is one of those places. Destin is seen sitting on a stone wall giving a thumb’s up. In the foreground is a floating head.

While Jeff’s camera was recording the scene, Destin was fitted with a head-mounted camera and binaural audio microphones. He set out walking the paths through the Machu Picchu site. When you watch his video, put on your headphones or earbuds so you can hear the ambient sounds as he heard them. The video lets you traverse the site as though you were there. The video takes about 35 minutes but is well worth it if you dream of going there some day. At least watch the beginning minutes with headphones. You might end up watching the entire video.

Like many who have visited Peru, our expectations centered largely on seeing Machu Picchu. We stood in awe and disbelief when we were actually there. Our memories and photos help us relive those feelings. We were mostly unaware of the many other archeological sites that are part of the rich history of the country and region. For example, the day before going to Machu Picchu we visited Pisac and Ollantaytambo. A few days after Machu Picchu, we visited Tipón and Sacsayhuamán. Those four sites were within a day drive of each other and were very impressive in their own ways.

Our views of Peru are mostly composed of the Inca culture and how they dominated the region until the arrival of the Spanish in the 1530s. But, the history of Peru and the Andes is rich with previous cultures. We want to go back and explore more of that rich heritage. Here are some highlights.

El Paraíso (38 – 31 Century BC): This pre-ceramic era site is on the Pacific coast a few kilometers north of Lima. It does not appear to be a residential complex. It was more likely an economic and/or religious center. It might have been a center for cotton control and development.

Chavín de Huántar (31 – 6 Century BC): This pre-Inca site is 250 km (160 mi) north of Lima, at an elevation of 3,180 meters (10,430 ft). People of the region came here to attend rituals of worship or consult teachers. This place dominated the valley and the region as a center to share ideas and material goods. 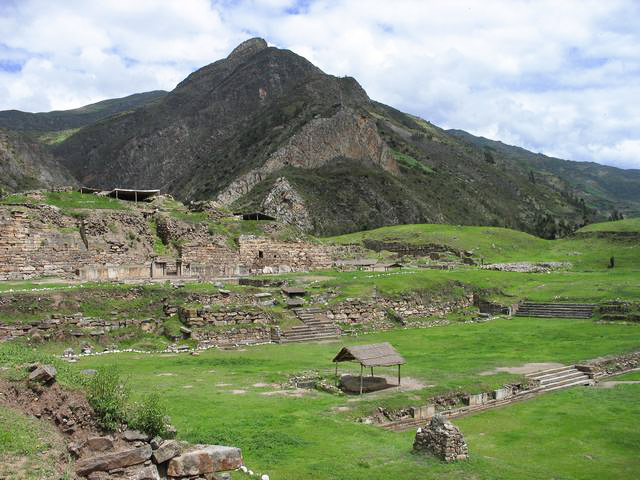 Caral (26 – 20 Century BC): This site is on the coast 200 km (120 mi) north of Lima. It has been described as the oldest ancient city of the Americas. A knotted fabric called a quipu was found here. The knots were a record-keeping system later perfected by the Inca. Population was estimated around 3000 who lived in a peaceful society.

Kuélap (5 – 16 Century AD): This pre-Inca site sits on a ridge 3000 m high in the Andes of northern Peru. Most of the 550 stone structures are round. Many of the foundation walls have geometrical shapes on their surfaces. One structure may have been a solar observatory. The site was abandoned in 1570 with the conquest by the Spanish. As many as 300,000 may have lived in the region. 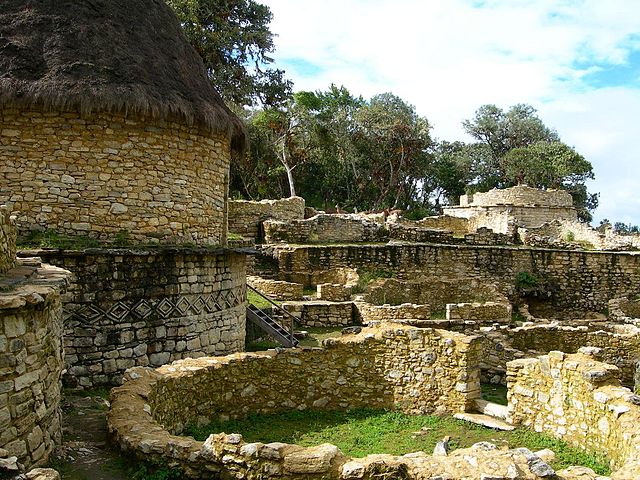 Chan Chan (9 – 15 Century AD): Located in the north of Peru, Chan Chan is close to the Pacific. Built by the Chimú in about 850 AD, it was conquered by the Inca in 1470. It had great riches and was looted by the Spaniards. It was considered the largest adobe city in the Americas. Carvings include birds, fish, small mammals, crabs, turtles, and sea creatures.

Cajamarca (16th Century AD): Site where Francisco Pizarro captured the Inca ruler Atahualpa on 16 Nov 1532. This battle was the beginning of the conquest of the Inca.

Moray (? – 16th Century AD): This site is about 50 km (31 mi) northwest of Cuzco at an elevation of 3,500 m (11,500 ft).  It has several terraced circular depressions. The largest is 30 m (98 ft) deep. The site has an irrigation system built by the Inca to deliver water for the crops. The depth and orientation of the terraces causes a temperature difference of 15 °C (27 °F) between the top and the bottom. It is theorized the site was used by the Inca to study the hardiness of various crops grown under different conditions.

We hope to go back someday to visit more of these spectacular sites.

Would you like to read more about our travels in Peru? Please see these posts:

4 thoughts on “Peru | Machu Picchu Plus Much More”