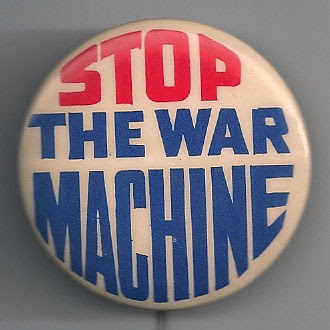 Hmmm…I wonder what’s in this box. There’s a little mildew on the edges. Better clean that up……. Oh! My old campaign buttons! Wow…these bring back some memories.

Back in the late ’60s, I was about to graduate from college. The country was in the throes of the Viet Nam War. I was unlucky in the draft lottery with the number 75. Many of you know what that meant. Deferments were harder to get. Some were eliminated. But, I got through college and was headed for a teaching job. That was still a deferred occupation. That didn’t stop me from protesting the war and collecting more buttons. 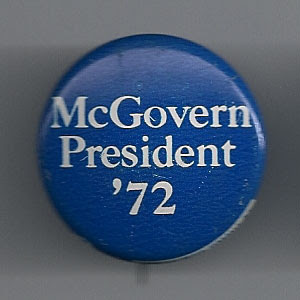 The presidential election winner in 1968 was Richard Nixon. My team of Hubert Humphrey and Edmund Muskie lost. I got started with my teaching career in 1969 and tried to focus on that. But, soon the 1972 election was approaching. I chose to support George McGovern. McGovern’s first choice for vice president was Thomas Eagleton of Missouri. That was a brief candidacy. He withdrew after it became known he checked himself into the hospital three times for physical and nervous exhaustion, receiving electro-convulsive therapy twice. He is also known to have suffered from depression. His replacement was R. Sargent Shriver. The McGovern-Shriver team lost to Richard “I am not a crook” Nixon and Spiro Agnew. 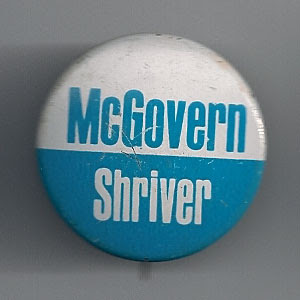 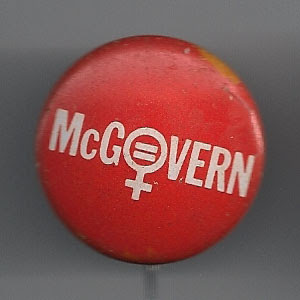 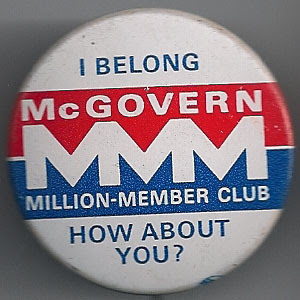 McGovern’s Million Member Club has interesting connections to political campaigns and their financing today. In his speech accepting the nomination, he addressed the issue of campaign finance in the following way.

Let the opposition collect their $10 million in secret money from the privileged few and let us find one million ordinary Americans who will contribute $25 each to this campaign, a Million Member Club with members who will not expect special favors for themselves but a better land for us all.

McGovern said “This is the people’s nomination and next January we will restore the government to the people of this country.” He spoke of how the Viet Nam War was charted behind closed doors by the previous four administrations. It was time to open the doors of secrecy and close down the war. He spoke passionately about the urgency to end the war that had taken the lives of tens of thousands of young Americans. He expressed appreciation to the other competitors for the nomination, namely Humphrey, Muskie, Scoop Jackson, Shirley Chisholm, Wilbur Mills, Terry Sanford, Eugene McCarthy, and George Wallace.

He asked everyone to join him and Senator Eagleton for strength and support, and called America home to the ideals that nourished us from the beginning. 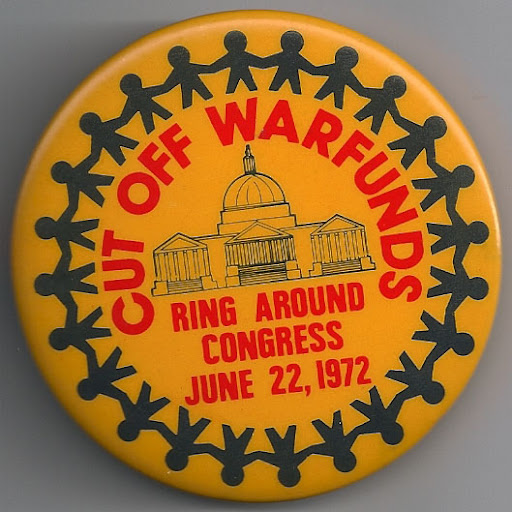 My friends and I drove from Illinois to take part in this war protest. I had never been to DC before. As we drove over the Appalachians and approached DC, it was raining heavily, and windy due to a hurricane nearby. It didn’t bode well for the protest attendance. Our goal was to join thousands of women and children and join hands to form a ring around Congress. Then we would meet with our representative or senator to state our positions. The protest was the idea of Joan Baez, folk singer and activist. The protest was opposed by black Washington political leaders. They said the peace movement was racist. They wanted protesters to pay a head tax to pay for their event. Another organizer was Cora Weiss of Women Strike for Peace. She accused the government of interference in the protest. She felt the dangerous weather from Hurricane Agnes was used as a pretense by the government to close roads and prevent access by protesters. We barely had enough people to form our ring around congress. And the event was overall not well received by anyone.

Other news of the day included massive B-52 bombings in Cambodia. Five days earlier, police arrested five people in the Watergate Breakin.

Some Other Treasures in the Box 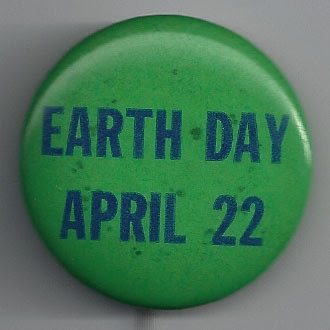 This is one of my favorites. It is from the first Earth Day April 22, 1970 during the spring of my first year of teaching. Our high school group asked the residents of the town of 10,000 to put their newspapers in bundles at the curb. We would pick them up and deliver them to a semi-trailer to be recycled. The town responded well. Soon after, we arranged to have one Saturday each month where they could bring paper, cans, and glass to a lot where we had three trailers parked. Another year, we did a river clean-up project through the town. Lots of people took part. Many communities nationwide were part of the Earth Day movement, and still are. 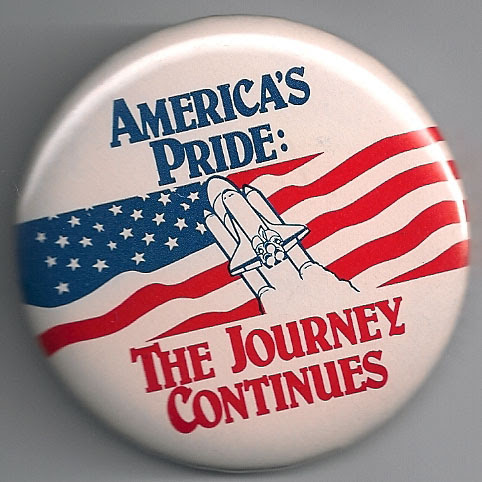 This button commemorated the return to flight of the Space Shuttle with STS-26 on September 29, 1988 after the Space Shuttle Challenger disaster of January 28, 1986. I have an emotional involvement with this button and story. In January of 1985, I completed and submitted the 16 page application for the Teacher in Space program. On the day of launch, I had a free class period and went to the library to watch with several other teachers. I dreamed of what it would have been like to be in Christa McAuliffe’s position. All hopes were high for her success. That disaster was a shock and blow for millions and leaves vivid memories that will never be erased. I still have a folder with a copy of the application and this certificate. 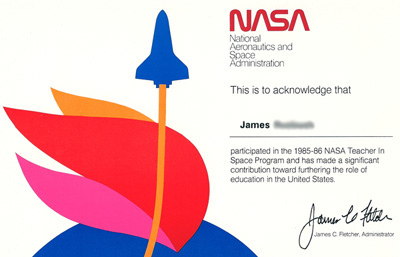 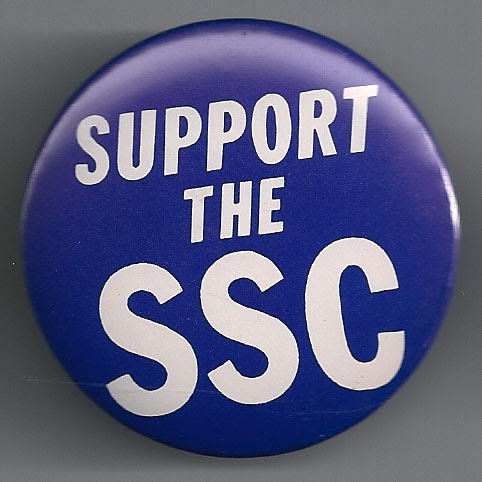 October 1993 saw the end of funding for the  Superconducting Super Collider (SSC) near Dallas, TX. I lived and taught near Fermilab for several years and was active in their education office. As the SSC project slowly proceeded, the Fermilab office was taking an active role in helping the new facility get organized. Fermilab today could have been doing the work of the CERN LHC if the country had wanted. But, it lost support and was cancelled. Here is a link to some good articles from the Waxahachie Journal. The 200,000 square foot of buildings and 134 acres was given to Ellis county more than a decade ago, when the U.S. government stopped funding for the collider. They have had trouble selling it.

This brass medallion commemorates the first humans to set foot on a body other than Earth. That event captivated the world. It was a special event for this farm boy from the midwest. I’ve been interested in space travel since I was ten. 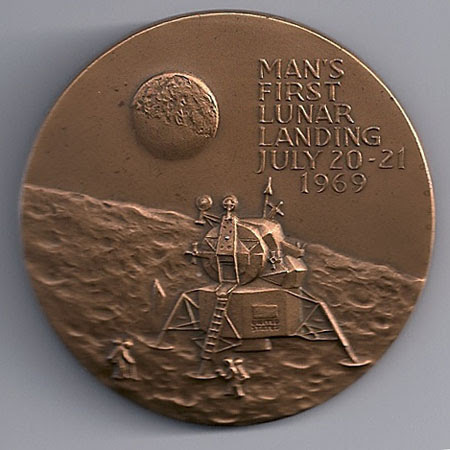 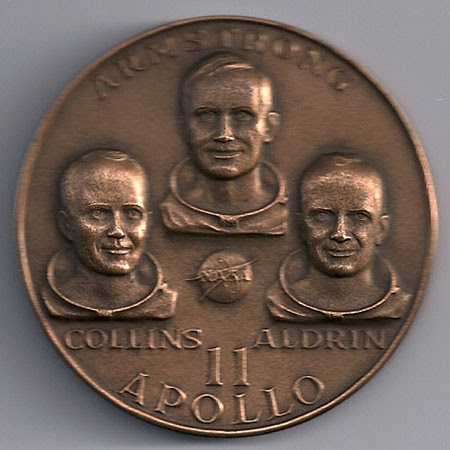 Most of the memories in this post have been tucked away for years, much as the box of buttons and medallions. Bringing them out into the light reminded me of many past events. Melanie said “That would make a good subject for a blog post.” She was right. Funny how things like this sit quietly on the shelves of our mind just waiting for an opportunity to speak again. My life has changed in many ways in the past 40 or so years. But, the feelings that motivated me to collect and hold on to these items have not changed. I still gravitate toward science, space exploration, and toward the people who stand for the positive attributes of life and justice and peace. I felt those things strongly then. I feel them now.

I remained politically vocal and active. I support and volunteer for progressive and liberal candidates and their causes. I am proud of my newest campaign button. I worked very hard locally for the re-election of President Obama, and for the election of my state and local candidates. Change begins at the grass roots. I proudly stand by my president.