Just before COVID-19 became headline news in the U.S. in March 2020, we rewarded ourselves with a quick trip to Santa Fe, New Mexico. It was cut short two days when we got nervous about being away from home. Here are posts about our train ride and some sights in Santa Fe.

An hour northwest from Santa Fe is Bandelier National Monument. Bandelier is part of Frijoles Canyon, which branches from the Rio Grande River. We were blessed with a warm, sunny day for our visit. Follow this link for a satellite view of the site. Click on any photos in this post for larger views.

In the distance is an extinct volcano that coated the area with ash more than a million years ago. The compacted ash rock is rather soft compared to other rocks. Native Americans in the region found the deep layers of ash in this canyon had naturally-formed caves and openings in the walls suitable for dwellings and food storage. The soft rock also yields easily to stone hand tools, making it even more welcoming for residence. They lived in this canyon for over 500 years until the mid-1600s.

One of the first structures we encountered on our hike was this large kiva below. The circular structure was an important place for ceremonies and community activity. It would have had a sturdy roof of wood and plastered mud. Six posts in the center held it up. A ladder and door in the roof was for entry. The stone walls are as tall as a person.

A kiva is visible within the village wall.

It is difficult to get sense of scale for the canyon wall and the degree of erosion of the volcanic ash. This close video might help.

Several openings in the wall were dwellings. The ceilings were blackened with soot. 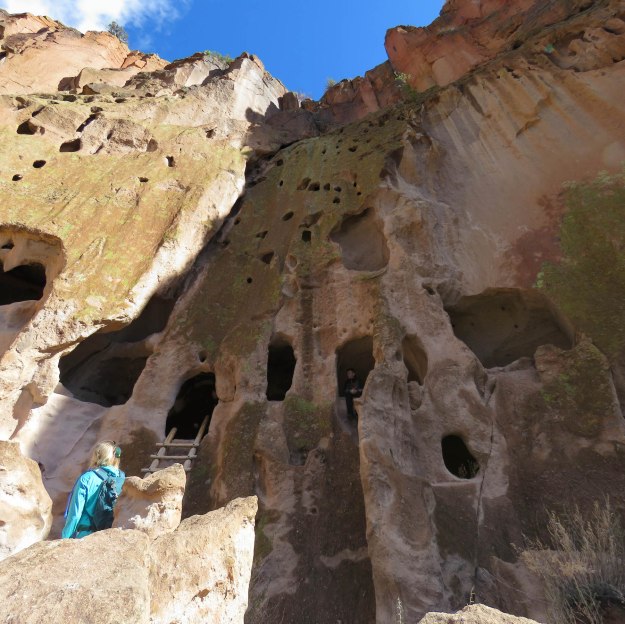 We reached this sheer cliff shown below with dwellings known as the long house. Some dwelling walls are seen in the foreground. Rows of holes remain from dwellings built at the base of the cliff. Wooden poles had been inserted into the manmade holes. The poles were covered with a plaster of mud, creating a roof. Another row of holes above then allowed a second level of dwellings. A third is visible in the center.

Also on this cliff face were several petroglyphs depicting animals or special symbols, such as this example. 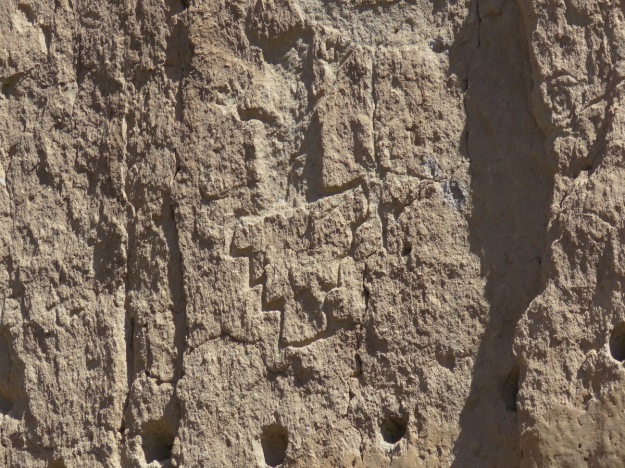 The power of erosion was evident everywhere. Click to enlarge.

The trail took us a half mile farther up the canyon to the Alcove House. It was a very large cave-like structure 140 feet above the canyon floor. The alcove is only accessible by several sets of ladders. This image from the floor of the canyon shows one ladder in the center and the cave above it and a little to the right of center. It was not a trip for the faint of heart. 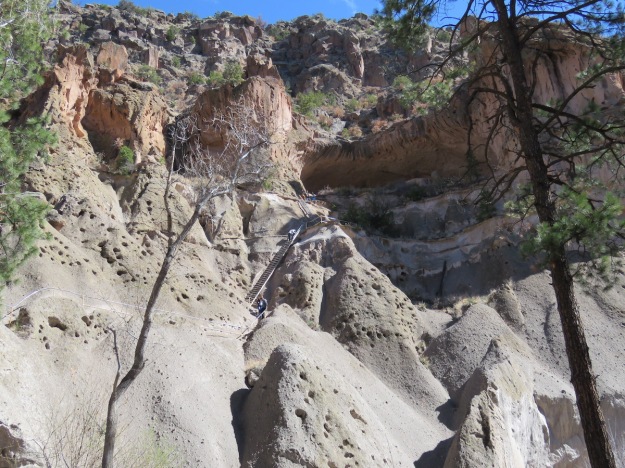 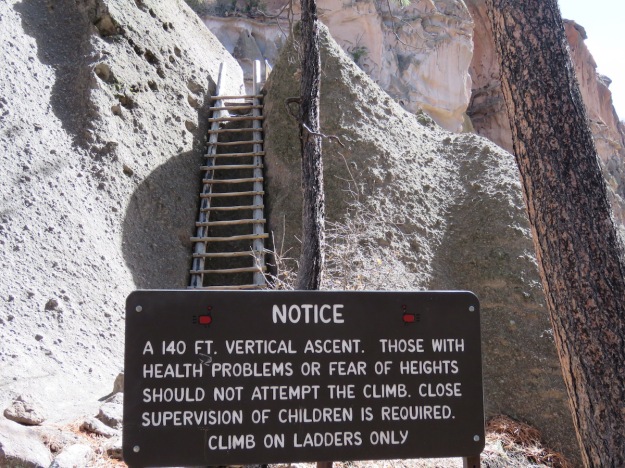 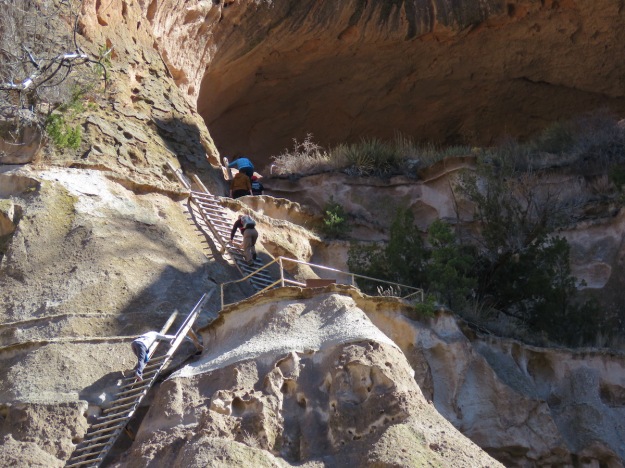 The view down the ladders from the top.

It was definitely worth the climb. We had no trouble on the ladders. They were solid and firmly attached to the rock. You did have to take turns. 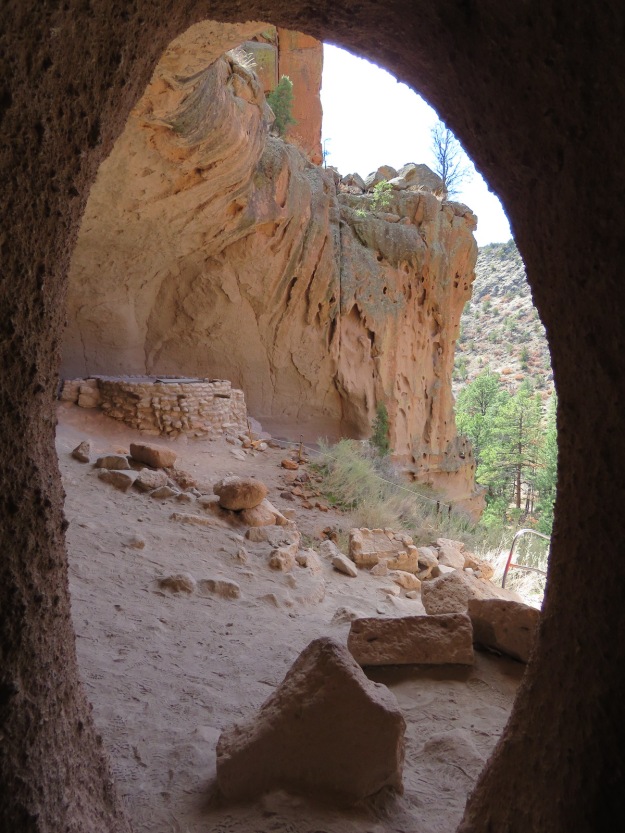 View from within a cavelet in the alcove. Kiva in the distance.

The visit to Bandelier was impressive. It was an inhabited canyon for several hundred years. No one lives there now. But, it is not considered abandoned. The spirits of the ancestors are still assumed to live here by the modern Pueblo people. All visitors were encouraged to show respect by staying on the trails.

The walk back to the visitor center and the drive home were beautiful. It is easy to see why this region attracted the people long ago and does so today. 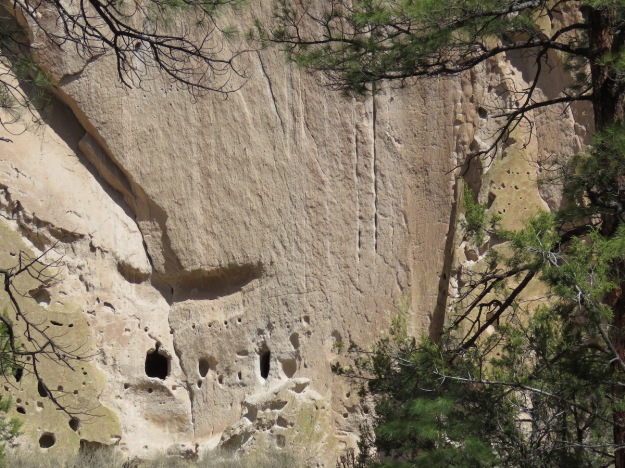