Any day with an owl visit feels like a lucky day.

Last evening as Jim and I ate dinner on our deck, the sun was dropping in the sky behind the trees. A squirrel broke the peace, screaming a few feet away from us. There are a number of neighborhood cats that roam, so we often hear a squirrel or bird sound the cat alarm. The squirrel was persistent and I looked into the trees to locate it. On a branch 15 feet away and above my head was a grey tail hanging down. That was no squirrel tail — it was an owl!

The tail I saw first, with its beautiful distinct bars.

The angle of the sun and the deck screening made photos tricky, but Jim was patient and got several. Click any photo to open the gallery and see more detail. 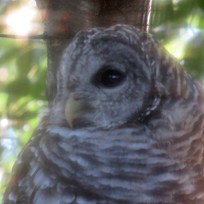 Quite the hook on its beak, a useful tool.

Soon the squirrel alerted the robins, who took up the chatter. They scolded and dive-bombed the owl a few times, brushing their claws through the owl’s feathers. The owl remained unperturbed, though at a point it turned its head to face down its harassers. 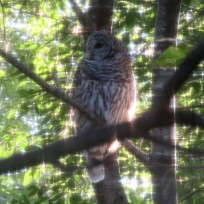 Looking over its shoulder

While Jim watched, the owl stretched a wing out, and then swept the wings up and back while spreading its tail. The setting sun and screening added a lot of sparkle to these photos. 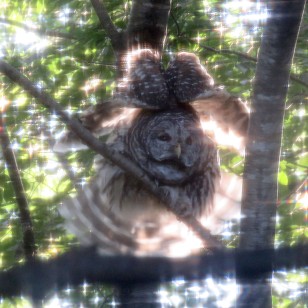 As we fell asleep later, we heard the owl call, reassuring us that it was still in the yard.