This American Robin nest had been occupied nearly two weeks before this photo was taken 31 July 2018. It was about 20 feet from my viewpoint. There were many photo opportunities in the days ahead.

On 1 and 2 August, we noticed disturbed behavior by the Robin parents. Instead of sitting quietly on the nest, they often stood and inspected the contents. We guessed the eggs had hatched.

Three days later a close inspection with the zoom lens revealed the tip of a tiny beak awaiting food from one of the parents. They grew stronger and raised their heads higher.

Frequent stops with food kept them all busy. They grew larger and stronger with each passing day. According to All About Birds, nestlings spend only 13-14 days before leaving the nest. Click to embiggen the gallery photos.

Who gets it this time?

You are bottomless pits.

I couldn’t settle for one egg. No. I needed three.

It is getting crowded in there.

The second week of their lives after hatching brought rapid growth and change. These photos are from 8 and 10 August. One has open eyes. One seemed a bit smaller than the other two. They were always eager for food, tired quickly, and fell into food-coma easily. 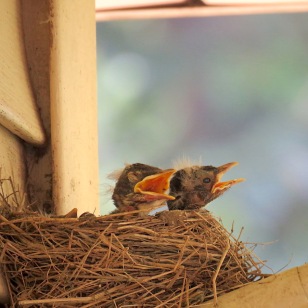 Arrival by a parent with a bill full of food brought immediate response from the nestlings. Sometimes a mouth went empty. Next time it got filled.

By 11 August, all eyes were open watching for an approaching parent with food. The thin crop of down was replaced with small feathers. They responded to outside noises by ducking down into the safety of the nest. 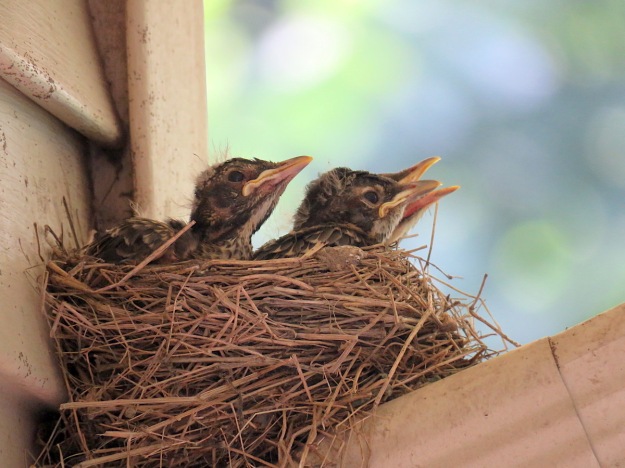 They stood almost as tall as their parent. The next day two of the three nestlings were gone from the nest. There was simply no room. 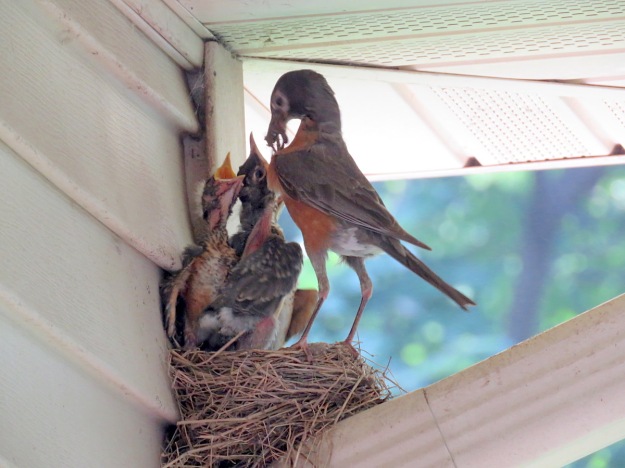 All day on 12 August, we watched hoping to see the last one make the leap to the ground below. It didn’t happen. It was not quite ready. Parent food visits were less frequent. They were also busy watching out for the other two. The young bird seemed agitated and nervous.

An early morning peek on 13 August showed it was still in the nest. We checked mid-morning and saw it empty. We were surprised how quickly they grew and left the nest. We might see one of them in the days ahead acting kind of goofy and slow. They had better watch out. We have cats that roam the neighborhood. It is a dangerous world out there.