Early in 2018, our son-in-law invited us to be his guests at a launch at the Kennedy Space Center in Florida. We immediately said “yes.” Our SIL is literally a rocket scientist/engineer. He works for a company contracted by NOAA and NASA, whose mission is to support the launch and instrument checkout of the next generation weather satellites of the GOES-R series.

Geostationary GOES-R was launched 19 November 2016 and is now part of the National Weather Service fleet. It views the eastern half of the U.S. and the Atlantic Ocean. Storm development, lightning, and hurricane tracking are parts of its main focus.

Our invitation was to watch the launch of GOES-S on 1 March 2018. When GOES-S is commissioned several months after launch, it will view the western half of the U.S. and the Pacific Ocean as GOES-West. Pacific storms, their impact on the western states, and forest fire tracking will be parts of its main focus. 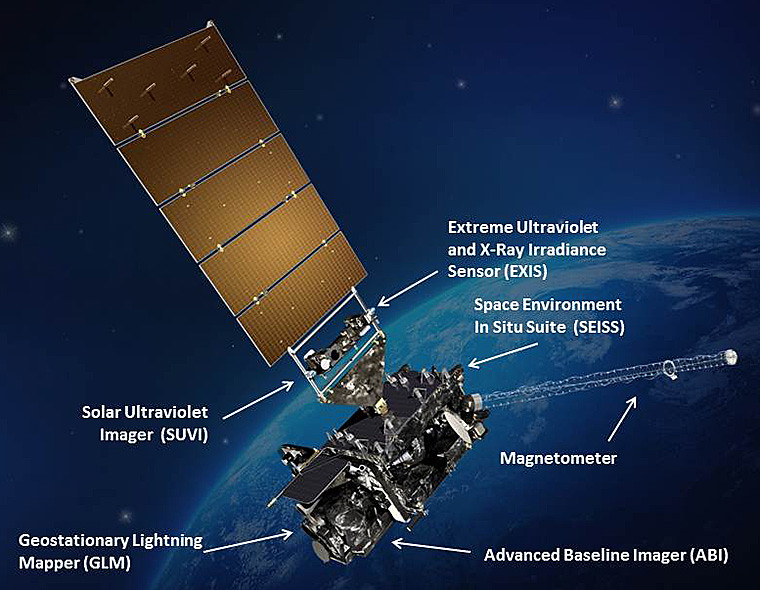 This post is about the Kennedy Space Center Visitor Complex. Our next post is about viewing the GOES-S launch later that same day.

The email we received from the Visitor Complex instructed us about arriving and times of events prior to launch. We drove to the site early in order to tour the exhibits. We were directed into a special line for guests of the GOES-S launch, checked through security, and guided into a building where our credentials were cleared.

Each of us received a goody bag with brochures, pins, a patch of the mission, and some stickers for windows. We were given a Guest lanyard to wear so we would be easily identified when we went to the launch viewing site on the buses.

Adjacent to this wall was the Rocket Garden, which displayed replicas of several of the rockets and capsules instrumental in getting our astronauts into space. At the far left in the image below is a replica of the Redstone rocket with a Mercury capsule on top. That combination put our first astronaut Alan Shepard into space on 5 May 1961. In the foreground is an Atlas rocket, similar to the one that carried John Glenn as the first American in orbit.

Below left is a replica of the Mercury capsule that carried John Glenn to his three orbits of the Earth on 20 February 1962. Below right is a replica of a two-man Gemini capsule atop a Titan booster.

Behind the Rocket Garden is the Saturn IB rocket. The Saturn rocket series developed the heavy lift capability of our rocket arsenal. German rocket engineer Wernher von Braun was instrumental in leading that effort. This is the precursor to the rocket that launched our astronauts to the Moon.

A most impressive rocket display was of the Saturn V at the launch viewing site. The Saturn V can be thought of as a vehicle. This type of vehicle was used for the Apollo missions. When it was used between 1967-1973, the Saturn V stood 363 feet tall and was 33 feet in diameter at the base. It was able to lift over 300,000 pounds into low earth orbit with 7.5 million pounds of thrust from 5 huge F-1 engines. Standing next to this rocket was awe-inspiring. It seemed impossible such a huge thing could lift-off and put payloads into orbit or toward the Moon. It was used 13 times with no failures.

1.5 million lbs of thrust per engine

F-1 at the Visitor Complex

You can drag and zoom around in this video to see more of the Saturn V.

The next phase of the U.S. launch arsenal after Apollo included the Space Shuttle vehicles. The Visitor Complex included a display of the Shuttle’s liquid fuel tank and solid rocket boosters. They towered above the entrance to a building containing the Shuttle Atlantis. We did not tour the Shuttle. The lines were long. We had previously seen Shuttle Discovery in the Smithsonian display at the Steven F. Udvar-Hazy Center in Virginia.

Atlantis is in the building in the back

Shuttles were attached to the yellow harness

The orange part is the external fuel tank for the Shuttle’s 3 main engines. It held liquid oxygen and liquid hydrogen, a highly explosive combination when ignited. Here is a link to an internal view. Two men inside give a sense of scale. The two white structures on either side are solid rocket boosters. A leak in an O-ring on one of these boosters caused the Challenger disaster. The entire assembly with a Shuttle attached stood 184 ft tall, half the height of a Saturn V at 363 ft.

The current state of manned space exploration utilizes the International Space Station. This multi-nation partnership provides a research platform for microgravity and space environment in which crew members conduct experiments in biology, human biology, physics, astronomy, meteorology, and other fields. As of this writing, the U.S. has no capability to launch humans into space. We contract with Russia to do that. There are plans to change that with the help of Boeing and SpaceX. NASA is also developing the Orion spacecraft and the SLS launch system.

This wandering tourist posed for our photo.

This last exhibit was fun to watch. Known as the Kugel fountain, this 9 ton black granite sphere has 88 constellations engraved on its surface. It is suspended on a pressurized flow of water from below. The low friction support lets one rotate it with ease. Kids loved it.