We grew up, and continue to live, in the upper midwest not far from the Mississippi and Illinois Rivers. We have seen many references around the region of Illinois, Wisconsin, and Iowa to the travels of Father Jacques Marquette and Louis Jolliet. They are well-known as the first white men to explore the upper part of the Mississippi River in 1673. They were commissioned by Louis, comte de Frontenac, governor of New France, to find the direction and the mouth of the Mississippi.

The two set out from St. Ignace with five men and two canoes. They traveled the upper part of Lake Michigan and entered Green Bay, where they paddled up the Fox River nearly to its headwaters. A short portage of only about two miles put them into the Wisconsin River. The city of Portage, WI is now at that site. The Wisconsin River carried them to the Mississippi at what is now the town of Prairie du Chien. We have visited that town a couple of times.

The Mississippi River carried them south just past the mouth of the Arkansas River, where they decided to stop. They were warned of white men with guns farther south. They were Spanish, and the Marquette-Jolliet party feared a conflict. The explorers headed back up the Mississippi. North of St. Louis they took a shorter alternate route along the Illinois River. They portaged over the land in what is now the Chicago region to get back onto Lake Michigan. They split up near Green Bay, where Marquette stayed to rest. Jolliet continued back to Canada to report of their discoveries. This map illustrates their long journey.

The following Wikipedia Commons map is from 1681 based on their explorations. Click to embiggen.

Father Marquette stayed in Green Bay during the winter of 1673-74 to rest. In the fall of 1674, he and two other men wintered over in what was to later become the city of Chicago. They were welcome guests of the Illinois Confederation of Native American Tribes. In the spring of 1675, he returned along the Illinois River to the Grand Village of the Illinois near present day Utica and Starved Rock State Park. He celebrated a public mass at the site, which he and Jolliet encountered two years earlier.

Marquette suffered from dysentery developed while on the Mississippi expedition. He headed back toward St. Ignace but died near present day Ludington, MI at the age of 37. His remains were reburied in St. Ignace in 1677.

We recently enjoyed an exploratory expedition road trip of our own from eastern Iowa along the Mississippi, to the confluence of the rivers just north of St. Louis. This map link shows you where the confluence is located. Also note on the map that the Missouri River joins the Mississippi not far to the south. This area is archeologically rich with artifacts from Native Americans going back several thousand years. The most recent are representative of the Cahokia Mounds settlement ending in the late 13th century.

Our route included some very remote farms and villages between Hannibal, MO and Père Marquette State Park. Jim was happy to drive that part of the route since he forgot to bring his wallet and driver’s license. He was fairly certain there would not be many police patrolling the remote area. (There were none to be seen!) When we got to the state park it was time for a hike. We’d been sitting for about four hours in the car. We entered the visitors’ center for directions and a map before we headed up the long sloping trail to a scenic overlook. This attractive young woman was eager for a hike. 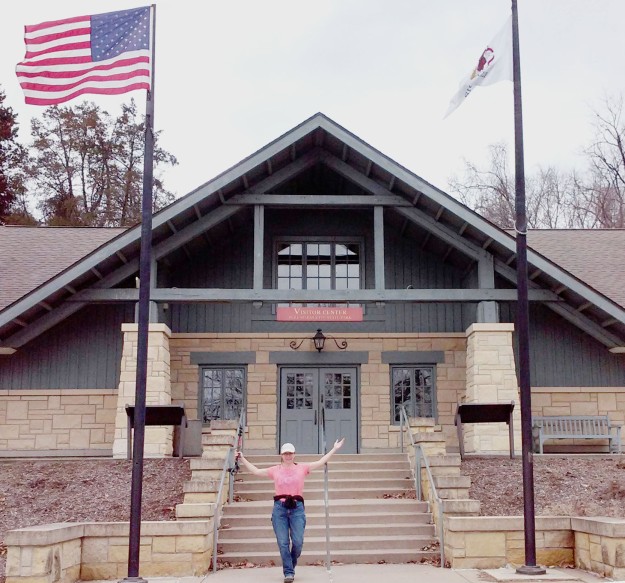 This short video pans up-river. The audio indicates it was a very windy day. Severe storms moved through the region later that night.

The Bird That Devours Men

We drove a different route home, which included going through the very small village of Piasa, IL. We had seen the word Piasa many times as we traveled the area near the state park. We looked it up and discovered some interesting history. Some Native American legends tell of the Piasa as part bird, reptile, mammal, and fish. It flew over the region many thousands of moons before the white man. When Marquette and Jolliet arrived at the confluence of the two rivers, they saw a large painting on the limestone cliff of the monster. Marquette described it this way:

“While Skirting some rocks, which by Their height and length inspired awe, We saw upon one of them two painted monsters which at first made Us afraid, and upon Which the boldest savages dare not Long rest their eyes. They are as large As a calf; they have Horns on their heads Like those of a deer, a horrible look, red eyes, a beard Like a tiger’s, a face somewhat like a man’s, a body Covered with scales, and so Long A tail that it winds all around the Body, passing above the head and going back between the legs, ending in a Fish’s tail. Green, red, and black are the three Colors composing the Picture. Moreover, these 2 monsters are so well painted that we cannot believe that any savage is their author; for good painters in France would find it difficult to reach that place Conveniently to paint them. Here is approximately The shape of these monsters, As we have faithfully Copied It.”

We saw no evidence of such a monster when we visited the park. Large birds did fly over. But, they were geese and herons. The original painting noted by Marquette has long since eroded and been damaged by vandals. A modern version is located near the town of Alton not far away.

We enjoyed our visit to the region. It included a brief visit with our son, a tour of the Anheuser-Busch brewery, and the Degas millinery exhibit at the St. Louis Art Museum. Though it was a quick trip south and back, it was a good opportunity to explore some territory we hadn’t seen before.