Our visit to Scotland this fall included our week-long barge trip, which we’ve already discussed. We also had three separate visits to Edinburgh, the capital of Scotland. It is a city that is centuries old. The history of the city’s development intrigued us.

Edinburgh of the Past

Edinburgh was built upon ground surrounding an ancient volcano core. The crag sticking up above the surrounding land where the castle was built stands over 100 meters (330 ft) above sea level. Tailing off toward the east was a ridge of land sloping downward to about 30 meters (100 ft). The top of the ridge served as a roadway. Buildings with shops and residences were densely arranged roughly perpendicular to the roadway. Two old maps show the layout from different perspectives looking north and then looking west. 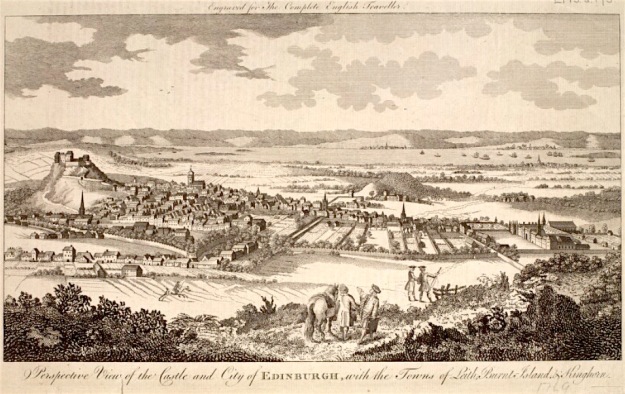 Research about the Old Town of Edinburgh led me to this wonderful map from the National Library of Scotland. The caption below it says Bird’s eye view of Edinburgh in 1647 by James Gordon of Rothiemay. It is worth a closer look if you have a monitor. The main thoroughfare running from the castle on the left to the Canongate area and Holyrood Abbey on the right is today known as the Royal Mile. It is a succession of the streets Castlehill, the Lawnmarket, the High Street, the Canongate and Abbey Strand.

Closer views of the upper stretches are provided in the next images.

Note how densely arranged are the buildings. At the far left and below center are some geometrical plots assumed to be courtyards or gardens.

This closest view shows St. Giles cathedral. We went in during our visit. No photos were allowed inside. Of particular interest in this view are the narrow passages running between the buildings. These passages are called closes or wynds. People accessed their close, and ultimately their home or shop, via narrow doorways from the main road. Dozens of closes and wynds are indicated in this interactive map.

The side closes and wynds went rather steeply downhill on either side of the main road. Water, rainfall, sewage, all drained along the closes and wynds to low ground north and south. The dense population created a worsening problem of stench, filth, and disease. The Great Edinburgh Plague of 1645 left tens of thousands dead. 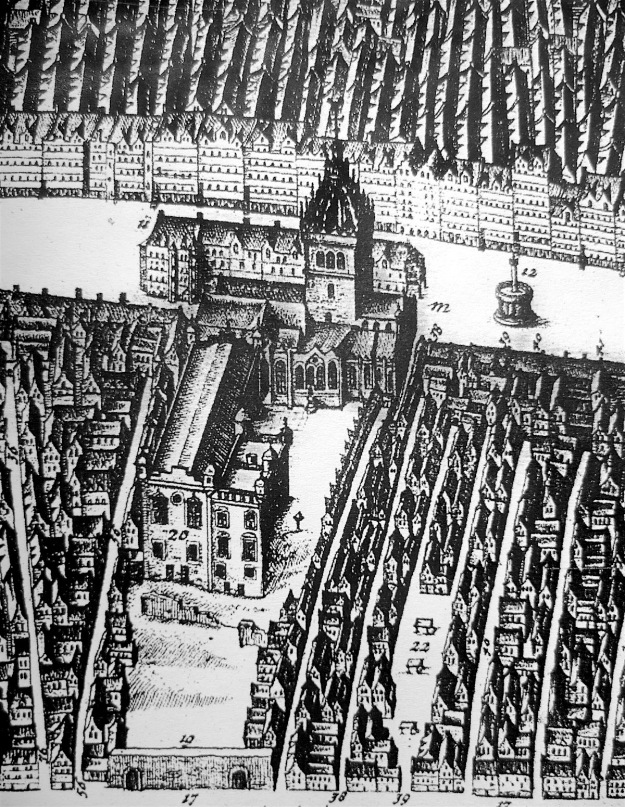 St Giles is in the top center.

Below is a depiction of the warren of narrow closes drawn by James Drummond in 1850. Wikimedia

Construction of newer buildings continued into the 18th and 19th centuries. Many of the closes and narrow passages were sealed off and today remain underground vaults below the newer buildings. One called Mary King’s Close was excavated and is now open for tours. There is a thriving business at night of ghost tours of the underground.

When we walked along the Royal Mile, we noticed many of the narrow doorways to the closes. They were fun to explore. You never knew what you would find inside or at the end. Here are a few images.

We stayed in Edinburgh three times. A later post will show views of the Castle and some museums. We enjoyed some highlights of Edinburgh but there was so much more to see and do. What follows are a few pictures of street scenes in and along the Royal Mile. We stayed in a hotel close to the center of Old Town on one of our visits. Just outside of it running parallel to the Royal Mile was the street known as Cowgate. Here it is looking west.

Our hotel was on the left edge of this picture. Cowgate is two levels below that of the Royal Mile.

Down at street level, we encountered many interesting sights and sounds. This one we liked.

St. Giles Cathedral is one of the buildings noted in the old maps above. We passed it many times. Here are several photos of the outside. We did gain entry once. But, no photos were allowed inside.

Lots of gargoyles adorn the outside.

Between St. Giles and Parliament House.

More scenes along the the Royal Mile and on nearby side streets.

On the street just outside of the castle.

Rear view of a former school. 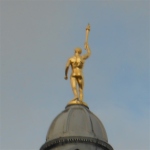 Atop the dome of the Old College.

Our last stay in Edinburgh was sunny and bright. People were enjoying Princes Street Gardens built to the north of the Royal Mile. The area was formerly a loch polluted with raw sewage and waste until the 18th century, when it was drained and converted into public space.

In front of City Chambers next to Mary King’s Close.

Here is a brief video scene first looking down the Royal Mile to the east, then a pan up to the west in the direction of the Castle. Note the bagpipe player and the tourists pulling suitcases.

Our next post will show you a few more of the sights we enjoyed in this great, historic city.