As mentioned in our Cuba Visit | Part 1, the architecture of Cuba captured our attention. We were told that about 12% of existing buildings are from the colonial era of Cuba, from 1515 to 1898. Eighty percent is from that point of independence until the revolution, in 1959. And about 8% has been built since then, mostly with Soviet influence and help.

When we left the airport on entering the country we soon saw the effect of the last 8%. On one side of the highway, ugly concrete apartment buildings rose up in groups. Though still used, they looked damaged and abandoned. (The worst of the Soviet buildings, though, is the Russian Embassy. The link is for the googled images of it and in fact, it’s worse in person than in the photos.)

On our second day we went to the Presidential Palace, now used as the Museum of the Revolution. It was built in 1920, though it shows neo-classical styling rather than art deco. Some of the decorations were provided by Tiffany & Co. Much of the building has been renovated, and work is being done now on the back of the building and also on the high front windows. You may be able to see the scaffolding above the front entry. 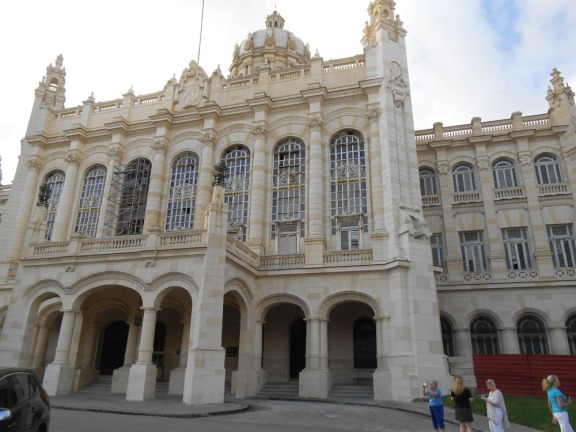 A view out one of the palace windows shows the entry to a narrow street. Note the crazy street light on the corner. We were surprised at the amount of public art we saw. Clearly the arts are important to Cubans. 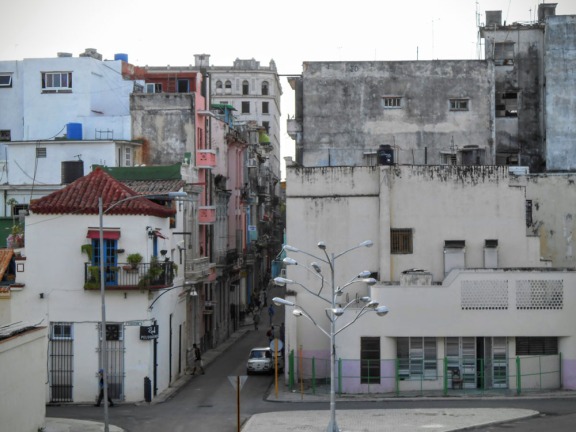 From there we went a few blocks into Old Havana. Most of this section is pre-revolution, and much of it is colonial. As with any older buildings, constant maintenance is required to keep them alive. Hurricane Ike in 2008 caused much damage to buildings in Old Havana. Unfortunately, the deprivations since the revolution have left many of these buildings on life support.

We were treated to a tour by a young architect named Daniel. His group is leading the charge for restoration in Old Havana. While the intention is to recreate the historic look of most of the buildings, ultimately they need to serve a modern purpose, not act as a time capsule. The group faces many challenges, including financial resources. However, the population density also creates issues. There are more than 70,000 people living in that part of the city. In order to renovate a building, the organization must find appropriate new housing for all of them for the term of renovation. Many of those moved are not returned to their original space. Many of the buildings have museums, cultural spaces, and restaurants below, and residential space on upper floors. The photos below show Daniel and some of the Old Havana locations. 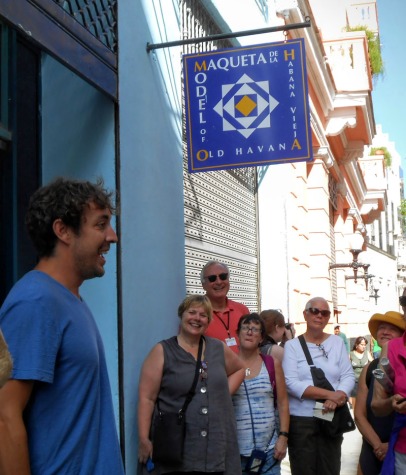 Daniel, the architect and tour guide. 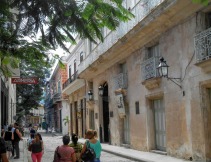 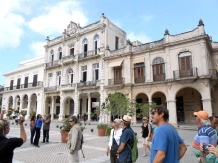 On the Plaza Vieja, in the center of this side is an elementary school.

The sign shows how this plaza began, including the site of a parking deck. 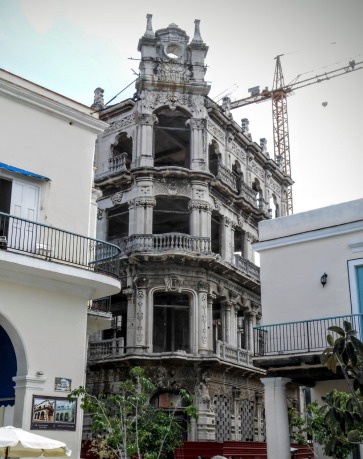 Restored buildings sit next to those in process and those waiting. 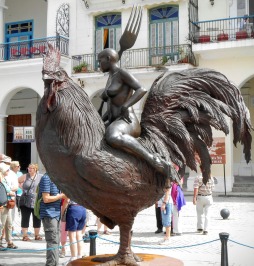 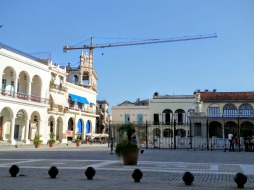 In the corner of the Plaza Vieja, a crane rises over the buildings. 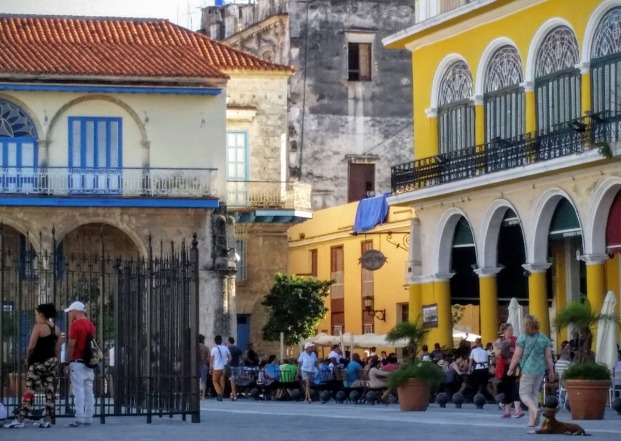 This short video shows a 360˚ view of the plaza.

That same day we had lunch on the 33rd floor of the FOCSA building outside of Old Havana. After two years’ of construction, It was completed in 1956. This back view of the building shows an empty swimming pool, and offices and apartments that appear in various states of use. Since renovations in the decade of the 2000s, much of the building is now used to house Venezuelan guest workers. 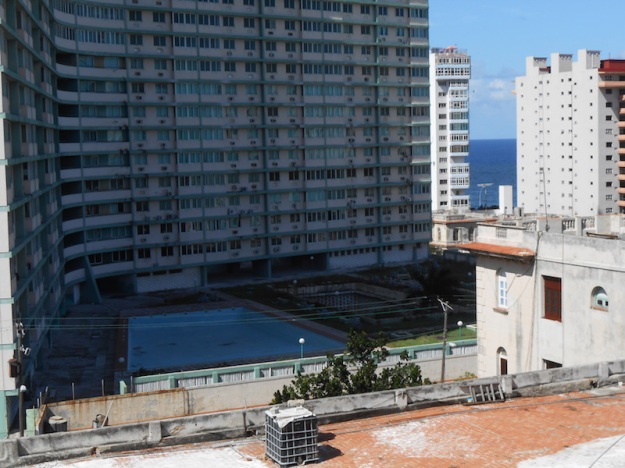 We had a good view from the restaurant of the northwestern part of the city. The buildings in this section are mostly from the time of independence (1898) and later. In the background near the bay coast is the newly designated U.S. Embassy building. Look first to the right margin where there is a yellow building. To its left is a turquoise building, then a dense forest of flagpoles. To the left behind the flagpoles is the embassy. If you click the picture you can see it in more detail.

On one of the afternoons, we were given the option to be dropped off somewhere in Old Havana. We chose to go through the Cuban Museum of Art directly behind the Museum of the Revolution. It was a newer building housing works from the 1800s through modern times. When we exited, we started toward the National Capitol Building, El Capitolio, to see the architecture in that part of the city. The capitol was closed for renovations.

One of the streets we walked was too narrow for cars. None of it had been updated. It was interesting to see people going about their business in the late afternoon. It was a mix of old and newer architecture as we made our way through the city that afternoon. 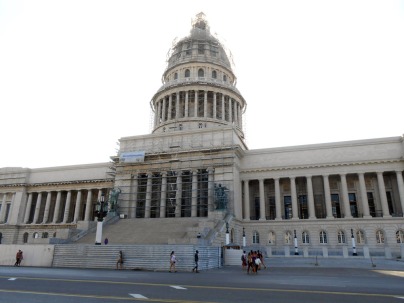 Completed in 1929. It is to be used as the home of Cuba’s National Assembly. 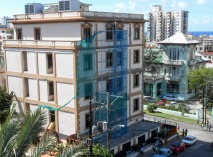 Interesting contrast between this building and the one across the street.

The old building on this corner collapsed. It and the one in the background are across the street from El Capitolio.

A young man engaged us in conversation by pointing to this as his home.

The city of Havana is a fascinating mix of very old Spanish architecture, Art Deco, Soviet style, and buildings from the 1950s. There is more to Cuba than the city of Havana. We were fortunate to be taken 2.5 hours west of the city to the Viñales Valley, a UNESCO World Heritage site. More about that visit in a later post.

Along the way, we could see some of the architecture and building designs of the rural areas and small towns near the highway. Most structures were single story with a flat roof. Some were painted bright colors. 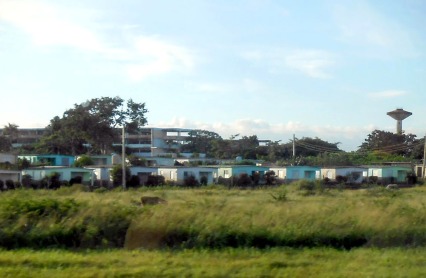 A small town near the highway as we headed west.

Note the water tanks on the roof of this home. Fill the tanks when electricity is on. Homes near the national park had rooms to rent. 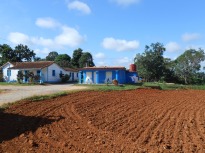 Houses of the tobacco farmer we visited. 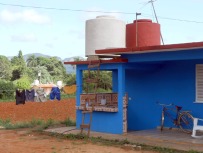 His farm is visited by several tour buses each day. He seems to make a decent living from the arrangement. 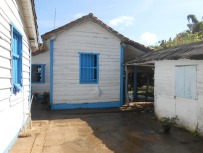 The mother and grandmother of the farmer lived next door. Several small buildings made up the home. 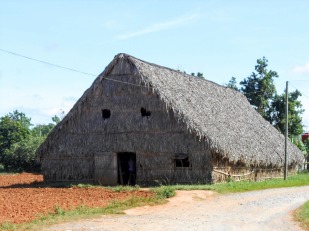 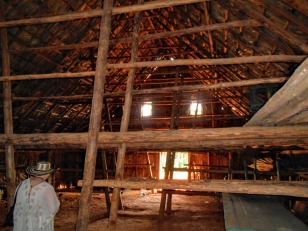 The pole structure in the barn allows plenty of racks for drying the hanging tobacco leaves.

The architecture of the country, crossing several centuries and a mix of conditions, was one of the most fascinating parts of the country. We wish the Cubans well as they continue to restore and renovate the existing buildings, and we’ll watch with great interest for the new construction to come.

Links to posts of parts 1 through 6 are found here.