Ah, the holidays… From Thanksgiving until after New Year’s, it’s like the feast that never ends. 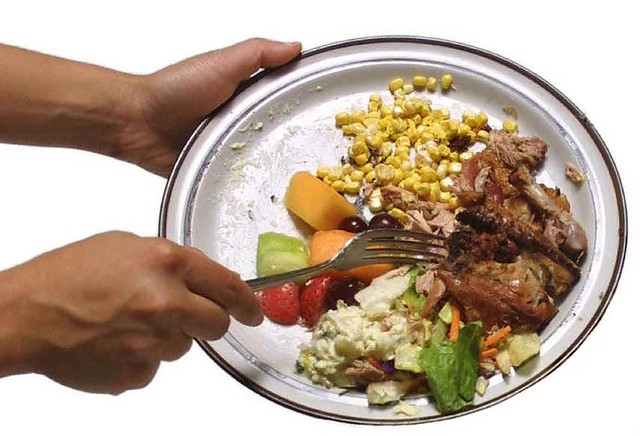 Turkey and ham, oysters and smoked salmon, potatoes and green beans, casseroles and fruit salads, pies and cream puffs. Not to mention all the cheese, crackers, cookies, and nut bars that seem too small to count. We taste and nibble, take more than we intend, fill ourselves, then fill our trash cans with food waste. When clearing the table and scraping plates from one holiday meal, we dump enough food to nourish several other people.

But what about the rest of the year? Did you get too much to eat to even finish it? Did some go to waste in your cupboard, your fridge, on the counter before you even had a chance to fix it? What left your plate or serving dishes for the trash can? How many times did you find forgotten leftovers and bid them adieu?

In the U.S. we waste a shocking amount of food at all points in the farm-to-fork chain. At the consumer level, you may waste more than you know. The National Geographic says, “Spills, spoilage, table scraps, and other losses from the typical American family of four add up to 1,160 pounds of uneaten food annually.” Doing the math, that means in that average household, there are 24 pounds of waste per person per month. This doesn’t include food loss at the producer’s end of the chain.

According to the Natural Resources Defense Council (NRDC,)

In households, fresh products make up most of the wasted food. The U.S. Department of Agriculture reports that a typical American throws out 40 percent of fresh fish, 23 percent of eggs, and 20 percent of milk. Citrus fruits and cherries top the list for fruits, and sweet potatoes, onions, and greens are commonly wasted vegetables.(12)

It can be hard to visualize the consequences of wasted or lost food. modernfarmer.com says

The environmental toll for throwing away so much uneaten food is also costly. Of the millions of tons that we waste in America each year, the U.S. Environmental Protection Agency (EPA) estimates 96 percent ends up in landfills. And currently, food waste is the number one material taking up landfill space, more than paper or plastic. This produces methane gas, one of the most harmful atmospheric pollutants.

In case you didn’t get that, let me repeat: food waste is the number one material going into landfills, creating methane gas. Methane gas is a greenhouse gas, trapping heat in the atmosphere and contributing to climate change.

If that weren’t enough, production of food we don’t eat requires tremendous resources including petroleum, chemicals for fertilizers and pesticides, and fresh water for irrigation. Again from the NRDC, wasteful production and use of food requires 25% of all freshwater used in the U.S. and 4% of total U.S. oil consumption. It costs $750 million per year just to dispose of the food and creates 33 million tons of landfill waste (leading to greenhouse gas emissions).

There is no way to soften this: producing and landfilling wasted food is environmentally hazardous.

What can you do to help? These tips from NRDC give great ideas for using your food dollars more effectively, and reducing resources used for producing, delivering, and landfilling unused foods.

Or for much simpler tips, consider these created during World War I. Nearly 100 years ago in the depths of the war, we recognized that wasted food was wasted resources, which could otherwise be used to support freedom from tyranny. We are fighting a different kind of tyranny now, that of environmental change. This tyrant, too, must be defeated, and we have a role in that fight.

5 thoughts on “Did You Get Enough to Eat?”