If you’ve been following our posts for the last few days, you know we’ve been vacationing in the Taos, New Mexico area. On our way here, we stopped at the Capulin Volcano. Once in Taos, our sunset hike along the Rio Grande River Gorge helped us acclimate to the elevation. We’ve hiked the Devisadero Peak Loop. And we’ve enjoyed our casita accommodations, some amazing food, and the San Francisco de Asis Catholic Church.

Sunday broke with a forecast for more mixed weather, including the possibility of rain. We wanted to take in one more significant trail before heading east into Oklahoma again. The trail we chose was the Lake Williams trail. As with the Devisadero trail from last week, the Lake Williams trail resides within the vast Carson National Forest.

The trailhead elevation is at approximately 10,200 feet in the Taos Ski Valley, north of the city of Taos. It is an out and back trail of 1.9 miles each direction, or a total of just under 4 miles. The highest elevation is just before the lake itself, at 11,142 feet. The footing was difficult in some places with jagged rocks and exposed roots. In other areas it was reasonably smooth. The elevation was the most difficult aspect, and we didn’t have much trouble with that. Taking breaks as needed, going at our own pace, got us to the lake very comfortably.
Click on any individual picture in the gallery to see them larger. Then, below each is a view full-size button. 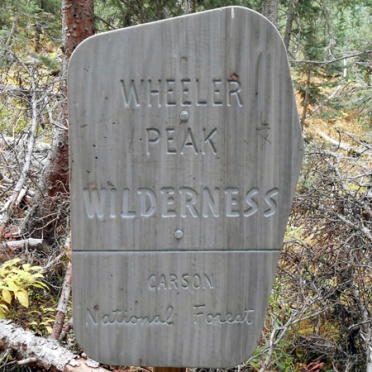 Besides the Lake Williams trail, hikers could take a branch up to Wheeler Peak, New Mexico’s highest elevation at 13,167 ft.

The blue blazes marked the trail.

Pretty tricky footing in some spots, though the trail was wide and well marked. 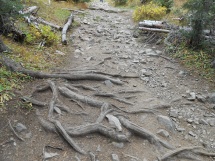 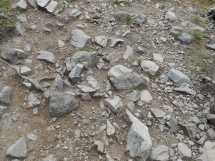 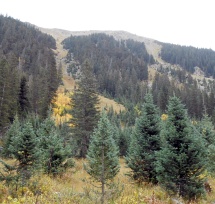 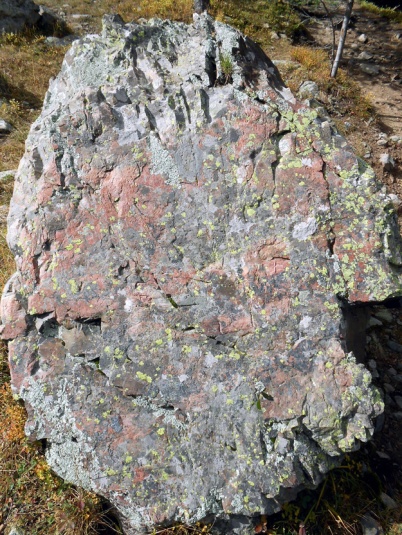 Melanie’s BIG rock, though only about 4 feet across. It had beautiful coloring including the lichens.

One bird caught our attention as we headed up. It is a Gray Jay, known for being a curious bird, and aggressively omnivorous. They hoard food for the winter. Several followed us a ways up the trail, perhaps wondering if we would leave anything for them. One sat on a branch directly above Jim’s head, turning its face side to side, to see the creature below.

Alternately brisk and breezy, calm and sunny, and clouded over with sprinkles, the weather was changeable as predicted. We were comfortable with our layers but saw hikers with a wide range of attire, including t-shirts and shorts. That seemed a tad chilly to us, given the temperatures in the 50s!
Click on any individual picture in the gallery to see them larger. Then, below each is a view full-size button. The panoramas are best when embiggened.

The lake is just around the next bend…

The trail opened up, showing more of the surrounding peaks.

Another hiker kindly captured this image of us.

On our way down, now. You can see the mix of clouds with sunlight on the far mountainside.

We’ve known for several months we would attempt to hike in higher elevations. Living in Iowa doesn’t give one any practice at that. To prepare, we have been dedicated to frequent and longer hikes near home and at local state parks. It paid off for us. It took a couple of days to acclimate to the 7000 ft elevation of Taos. We discovered we were strong and able to make the hikes without distress. In fact, as Melanie said later ‘I could have gone quite a lot farther.’ It is a good feeling to reach a goal and in such a beautiful setting.