Some interesting history about quilts and slavery in the U.S.

Did quilts help guide escaped slaves to safety? Did different quilt blocks have specific meanings to slaves, perhaps based on their African past? Was the pattern of stitches and knots informative about routes to take, perhaps creating a topographical map?

The most famous telling of a quilt code says that indeed, quilts were a vital part of the Underground Railroad, and their history with it was unwritten until very recently.

One of the blocks in the quilt code is the Bear’s Paw, shown here. 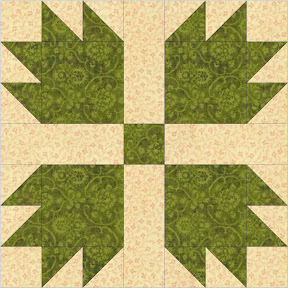 This pattern consists of several squares, rectangles, and right triangles. When different scraps of fabric are used, the pattern takes on the complexity of a map that is remarkably similar in design to the African Hausa embroidered map of a village …Just as the Hausa design defines the perimeter of the village and identifies major landmarks, the Bear’s Paw pattern could be used to identify…