We celebrate women’s history one month a year. Though most of us could argue that women should be celebrated every day, perhaps it is fitting that the designated month is March. March, with the beginning of spring, the symbolism of birth and growth. March, whose very name implies strength and unity and progress. March is a month that symbolizes women well.

Today I bring you the story of a woman who led in the arena of politics, much before her time, a woman named Gladys Pyle. 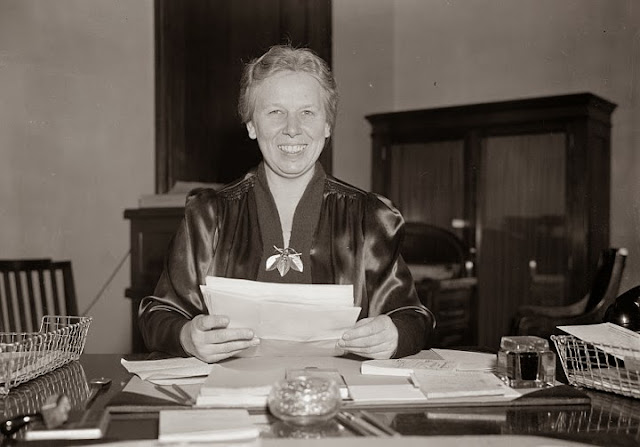 “The Greek word for ‘idiot’, literally translated, means one who does not participate in politics. That sums up my conviction on the subject.”
~ Gladys Pyle

Gladys Pyle lived by her conviction and was politically active her entire life. Born October 4, 1890 in Huron, SD, she grew up with examples of political careers held by both of her parents. Her father, an attorney and politician who also served as the state’s Attorney General, died when Gladys was 11. Her mother and sisters were involved with the Women’s Suffrage movement, successfully helping to bring women’s voting rights to South Dakota. After her father’s death, her mother taught school and later served on the Huron College Board of Affairs.

As an adult, Gladys broke ground time after time. After graduating from Huron College, Gladys took a position as teacher and basketball coach for both the boys’ and girls’ teams at nearby high schools. She taught for six years before becoming the superintendent of schools for a small school district near Huron, possibly the first female district superintendent in the state.

She decided to enter the political fray, becoming the first woman member of the state House of Representatives in 1923. Her entry into the position only came after demanding a recount after a very close vote. In 1927 she became Secretary of State, the first woman to be elected to statewide office. A Republican, she ran for governor in 1930. There were a number of men in the race, as well, and it was a hard fought primary battle between them, the men virtually ignoring Gladys. Going into May’s convention, Gladys had the lead in balloting. But after deal-making, the man with the fewest votes going into the convention won the party nomination, going on to become governor.

Though she didn’t win the governorship, she next was appointed to the state securities commission from 1931-33, the same period when federal securities laws were enacted to improve stability of the financial system.

In 1936 one of South Dakota’s senators died after a long illness. A successor was appointed, but state law allowed the appointee to serve only until the next scheduled general election, in November of 1938. In addition, the law would not allow a candidate to appear on the ballot twice, so the man nominated for the general election, to be sworn in the next January, could not be elected to the slot open from the time of the election in November until January. Gladys was “the man” for the job.

She moved to Washington, DC for the two month term, as there were rumors that President Roosevelt would call a special session to take advantage of the Democratic majority in Congress. No special session was called, and Senator Pyle never was sworn in. However, during the time she filled the position, she advocated on behalf of her constituency. Most expenses were paid out of her own pocket. Since she was not sworn in, she did not have a salary.

After her short term in office, she returned to Huron to resume her career in insurance. In addition to filling other positions in public life, she continued as a licensed insurance agent until 1986. At that time, at age 95 years old, she retired and moved into a nursing home. She died in 1989 at age 98.

Gladys Pyle, an ancestor of Jim’s, was a remarkable woman who broke barriers all her life. In her political career as well as her business career, and even as a young woman when she coached basketball and served in education administration, she led the march for women in public life. She lived her conviction, involved in the arena of politics, for the good of the people of her state and the progress of women everywhere.

In his comment below, Jim adds this link with more great information about her. Take a look.