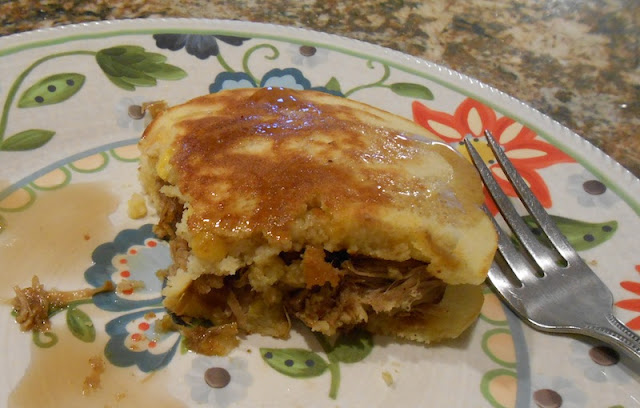 We couldn’t wait to eat! Photos came after a few … mmm … lovely bites.

One day after a long morning of driving and hiking, we were ready for a big lunch in a spectacular setting. We stopped at the Fairmont Chateau Lake Louise, settling in to eat and enjoy the view. I ordered a stack of corn pancakes layered with pulled pork and drizzled with maple syrup. And I haven’t stopped thinking about them since!

Usually we eat pulled pork on a bun, barbecue style. But recently I had some pulled pork and no buns. Hmm… Time to try the cornmeal pancakes! I found this Betty Crocker recipe, which uses Bisquick, right up my alley. I modified it a little for the recipe below:

Pour batter by 1/4 cupfuls onto hot skillet. Cook until puffed and dry around edges. Turn; cook until golden brown. Makes about 12 pancakes.

For our scrumptious meal, layer two cornmeal pancakes around pork, flavoring with a good barbecue sauce to taste. (We also used a touch of Jim’s homemade hot sauce, which added a nice spark.) Drizzle with maple syrup and enjoy!

And what about that pulled pork?

Start with a 3-3.5 pound boneless pork shoulder or butt. This is the same cut but may be referred to by either one. (My butcher distinguishes between them by bone-in or not, but this doesn’t seem to be universal.) This is NOT the same cut as a pork loin roast. The loin also makes a great meal but it isn’t going to cook into the lovely shreds that a butt will.

I cook it in a slow-cooker. This can be either a crock-pot style or the pan-on-burner style. I’ve used both and they both work fine. RESIST the temptation to lift the lid with either cooker. Let the pot retain the heat and moisture. Just leave it alone. That’s the beauty of using the slow-cooker anyway.

Now, there are as many recipes for pulled pork as there are cooks who make it, and if you cook like I do, you read through a bunch of recipes each time you try something new, and then consolidate their thinking into your own process. So while I’ll tell you this is MY recipe, I won’t be so silly as to suggest it is THE recipe.

Pulled Pork
3-3.5 pound boneless pork shoulder or butt roast (may come as two pieces of meat tied or netted together — untie them if they are)
onion chopped small, about 1/2 of a large onion or a whole small onion (more onion to taste!)
salt, pepper, and chili powder
1/3 cup brown sugar, packed
1/2 cup or less ketchup
1/2 cup cider vinegar

Put the lid on the pan and cook on medium-high for at least 4 to 6 hours. (Know your slow cooker — I have two and they cook differently.) Don’t take the lid off until at least 4 hours have gone by. Then you might check for doneness. If you stick a fork in the meat and twist a little, shredding it, it is done. If you’re a stickler, check the internal temperature. It should read at least 145 degrees.

Once it’s cooked and the heat is turned off, remove the meat, leaving the juices in the pan. Shred the meat and return it to the pan.

Reheat for serving. If you’re making this for a party and not serving with the corn pancakes, consider buying junior buns, the term used around here for buns that are smaller than typical hamburger sized. Though the seasoning provides a barbecue essence, many people will want to top their sandwich with barbecue sauce, too.