The phone rang Thursday evening. It was our son. He had a three day weekend coming up. His other last-minute attempts to plan some diversion didn’t pan out. Would we meet him halfway, in Kansas City.

We’re not the most spontaneous people in the world, but we agreed to meet him on Saturday at a hotel in downtown KC, MO. It was well-located near the spots we wanted to visit. After driving through blizzard conditions for part of our trip, we arrived safely.

None of us had spent time there before, but we all had ideas of what to see and do. First on the list was the historic Union Station. As with many old city train stations, it had been a hub for both passenger and freight travel. The old building had fallen into disrepair and disuse. Efforts to renovate were successful, and it again serves as a hub for the city and as an Amtrak station.

One of two huge waiting areas of the station.

These plaster ceiling sections had fallen into disrepair.

Do you listen to the Car Talk credits?

Of course you can’t go to Kansas City without stopping for barbecue. Son had already eaten a full lunch of it, but was game to go for dinner, too. We went to Arthur Bryant’s for ribs, burnt ends, and a perfect potato salad.

Sunday began with a tourist experience of a different kind. Our son is interested in the brewing of beer and the distilling of spirits. He wanted us to tour the Boulevard Brewing Company plant. The tour included free sampling, so before heading there, we had a quick lunch of empanadas, arepas, and black beans.

There are four year-round releases in The Smokestack Series. 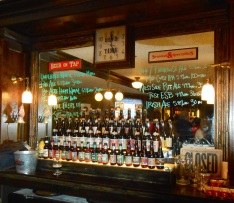 We were given Irish Ale here as we waited for the tour to start. 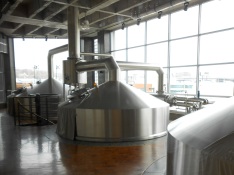 Too bad the line wasn’t running. 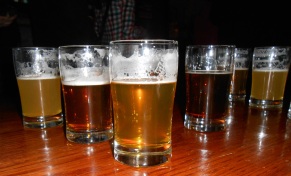 We each got to choose 3 more brews to sample after the tour.

Though naps were tempting, we wanted to take in two more destinations before giving in. In the 18th and Vine district, one building houses the American Jazz Museum and the Negro Leagues Baseball Museum. In addition, there is a fine gallery of jazz-related art, most of it two-dimensional. The baseball museum was especially fascinating. Anyone who cares about either baseball or the history of post-Civil War segregation could spend many hours immersed in the rich collection of photos, film clips, and memorabilia. No photos were allowed, but we urge you to visit if you have the chance.

The day was punctuated with dinner at a restaurant called the Vietnam Cafe. It is located in an old store-front building on the corner of two very narrow streets. Tightly packed tables filled quickly, customers wanting to assure their meal before closing time of 6:00. We started with a dish of beef pho, with delicate, aromatic broth. We each ordered a separate entree and ate eagerly. The flavors were balanced well and layered, without the heavy hit of soy sauce that often comes with Americanized Asian foods.

Besides the meals and tourist stops, we all enjoyed the landscape. Broad expanses covered with rail tracks, beat-down commercial districts, and historic buildings gave plenty to take in. Kansas City proved to be much more interesting and diverse than we could have guessed. Next time Son asks us to meet him, we’ll say “Kansas City, here I come!”

11 thoughts on “Meet Me in Kansas City”