Stroke. Disoriented at church. Stroke. Lost on the way home. Stroke. “Will this happen to me again?”

December 31, 1999. The world held its breath, watching whether global computer systems would crash due to the 4-digit year problem. Meanwhile, my mother-in-law was transported from her small county hospital to a larger medical center. The computers were fine. She was not. She’d had a stroke, also known as a Cerebral Vascular Accident, or CVA.

At age 87, she insisted she would go to New Year’s Eve mass at the same church she’d attended all her life. My father-in-law wasn’t feeling well enough to go, but well enough that she could leave him alone at home for a couple hours. Later we heard from others that she hadn’t taken communion at church. It was a noticeable omission.

She headed for home afterward. She was a good driver, and I never felt unsafe when she drove. But she got lost traveling the same route she’d driven for more than 20 years, since they’d moved into town. Stopping in front of a shed on the dark country road, she tried to get in, but it was locked. Confused, she set out along the edge of the cornfield in the cold night air. It was not frigid. There was no snow. We do not take this for granted in the Midwest, this time of year.

In a rural area, people notice the out-of-place, and someone noticed her car parked where no car should be parked. Dispatch to the county sheriff, license plate number reported, was overheard on scanner by one of her sons. A grandson was called by someone else. Forces were activated; she was found.

We were able to see her the next day as she spoke with a doctor. She asked, “Will this happen to me again?” The doctor told her there was no way to predict it, but the fact she was lucid enough to ask the question was encouraging. His prognosis for her recovery was optimistic.

Discharged to the nursing home back in her own county, she recovered substantially as the doctor predicted. There were a lot of problems, though, including physical and mental ones. She recognized family and friends, remembering events from long ago, though not recent ones. The brain attack had left her with aphasia, the inability to fully understand or express speech. Conversations with family members went on, but the aphasia always made us wonder if she understood more than she could convey. Her physical needs were too complex to care for her in her own little house. She never lived there again. 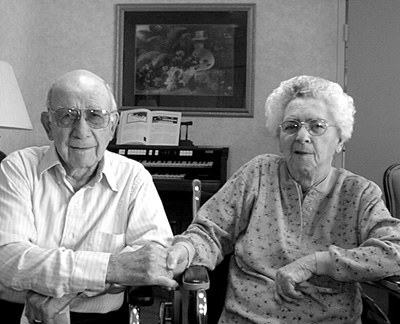 At the time the photo above was taken, she and her husband had been married more than 66 years. She was well enough in the spring to enjoy the wedding shower for a beloved granddaughter, hosted in the family room at the nursing home. But over the next five years, we lost her, pieces at a time. While at first she had good facial recognition, it wasn’t long before she only could say my name if someone else said it first. That made me a little sad, but I was heartened that she always knew my son’s name, always until the last time she called it, mistaking him for one of her own sons.

Stroke. It can kill quickly or slowly. For the lucky ones, it is a temporary set-back. “Luck” often requires speed in diagnosis and treatment. We all need to know the signs of stroke and what to do if we suspect it.

To identify possible stroke in someone else, use the F.A.S.T. acronym.

How can we prevent stroke? The National Institutes of Health provides stroke information that includes risk factors. These include
High blood pressure or hypertension
Cigarette smoking
Heart disease
Warning signs or history of TIA or stroke
Diabetes
Cholesterol imbalance
Physical inactivity or obesity
See your doctor for assessment of your risk.

A stroke is also known as a Cerebral Vascular Accident, but it is rarely an accident. The underlying conditions that contribute to risk may be present for years before a stroke. Know your risks and manage them where you can. Know the symptoms to help those around you, as well as yourself. Speed in diagnosis and treatment during or immediately after a stroke is essential.