Last Thursday we celebrated our anniversary hiking in Backbone State Park. These three short paragraphs provide a good description of the park:

Backbone State Park was dedicated in 1920. It was Iowa’s first state park and remains one of the most significant. Backbone is named for its narrow and steep ridge of bedrock carved by a loop of the Maquoketa River. Folklore named this high ridge of rock the “Devil’s Backbone”. Nearly a hundred years ago, State Geologist Samuel Calvin wrote these words about “The Backbone”:

“Its sides are in places precipitous, the rocky cliffs rising sheer for more than 80 feet. Erosion and secular decay have carved the rocks into picturesque columns, towers, castles, battlements and flying buttresses. ”

Backbone consists of 2,001 acres and is heavily wooded with a variety of tree species, predominantly oak and maple. This woodland serves as a valuable refuge for a variety of wildlife including deer, raccoon, fox, turkeys, ruffed grouse and many species of songbirds.

We arrived mid-morning, sun dappling through the trees and lighting the entry sign. 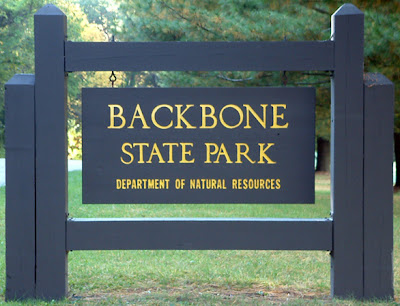 The main road curves through, crossing the spring-fed stream several times. The trout in the stream attract anglers of various sorts, including this bald eagle. 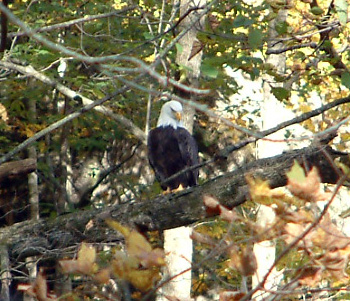 After a sharp curve to the east, we rose up to a higher elevation and the Backbone Trail. Last time we hiked here, our son was with us. He was young enough to worry about his enthusiasm and energy causing problems on the 80-foot cliffs. This trail map, obscured with the heavy tree cover, doesn’t show the elevation differences throughout the park.

A little over a mile loop sometimes 80′ sheer drops.

Rocks and roots in the path.

This narrow opening went down to the river.

Hey Jim, come look at this.

We took a break with a picnic lunch and then found the entrance to the East Lake Trail. The whole length is 2.4 miles, but we stopped and turned where the path was blocked by a downed tree. This trail was fun and actually more challenging than the Backbone, with roots and rocks on the path, as well as its up and down nature. It is sandwiched between limestone cliffs and the lake, giving a great variety of footing.

Steep rock faces along this trail.

Eventually, these trees fall over the edge.

Acorns, walnuts, and hickories decorated the ground. The trees are still mostly green, though there are variations with some golden and some red-tinged. The maples as usual are the most brilliant, but even they are not showy yet. 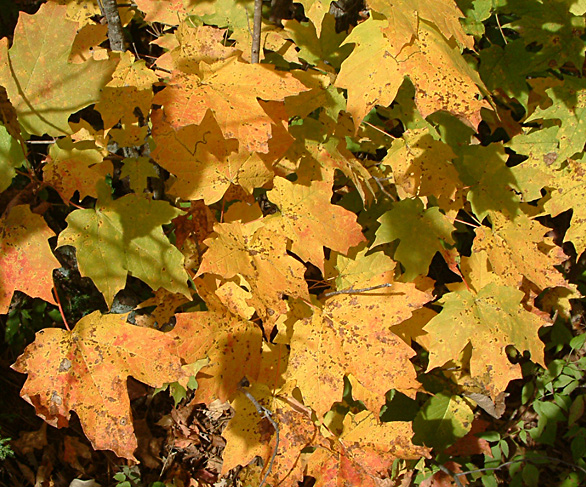 Fungus of different kinds catch our attention more and more, from the tiny lichens on rocks and trees to the brilliant shelf fungus and oyster mushrooms.

Something had taken a bite out of this one. That is about 3/4″ thick. See the droplets and liquid.

Almost missed this one behind the tree trunk.

Besides these natural wonders, we saw the world’s largest strawberry that morning at 15′ tall. 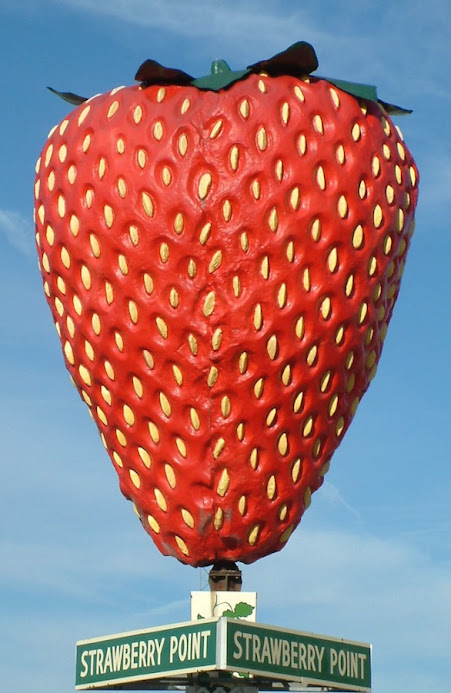 The country has more than 6,000 state parks. The federal government shutdown has had little to no effect on their operation. They wait for you. Enjoy!