We had such a wonderful day. We left here a little after 6 am, after seeing the thinnest crescent moon and Jupiter in the very clear sky. It was in the low 50s, pretty cool but seasonal for here. Three towns north we stopped for breakfast and coffee, which were both decent. And then on to the park. Iowa is very beautiful. Many people believe it is flat and boring, but it is not flat. And you’d only be bored if you find the rolling hills, century farmsteads, and tree-lined creek beds uninspiring. Northeast Iowa rolls more, and this time of year literally looks like a Grant Wood painting. Indeed he was from here so knew the land well. 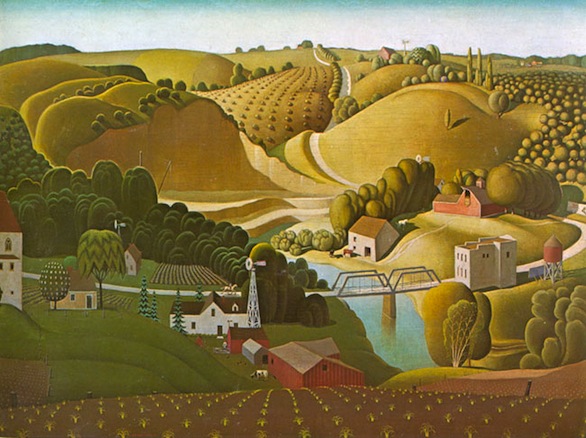 After breakfast, we drove northeast another hour or so. At Anamosa, we turned east onto hwy. 64, also marked as Grant Wood Scenic Byway. It followed the high ground between two rivers and provided some nice vistas.  We drove through Wyoming, Monmouth, and Baldwin. Just after Pence Cemetery, we turned north onto Bear Creek Road. This last part was a gravel-covered “Level B, Enter at your own Risk” road. It wasn’t bad, but would be difficult if muddy.

Driving out of the open high fields and into trees, we reached the back entrance and were suddenly in the park. It was darkened by the overhanging canopy. We drove down the hill and passed entrances for a campground and picnic areas. The park is small, only 360 acres, so quickly we were at the “lower shelter,” parked, and looking at maps of the cave system and hiking trails. 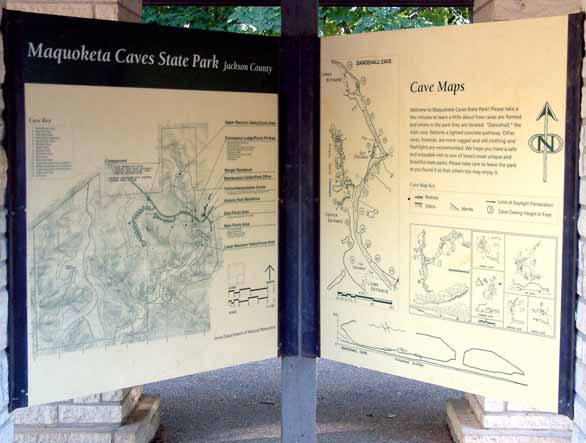 There is a bat disease called “white nose,” which is a fungus. When a bat colony gets infected, the mortality rate can be 100%. The caves are on watch for the disease, so they try to inform park visitors about it. To do that, the caves are supposedly accessible only with a permit. Basically, you’re permitted if you talk to the ranger, he informs you about the disease, and you get a wristband.

So we went to the park office and talked to the ranger. In his office there are a couple of big aquarium tanks. One had a rat snake in it and the other had 2 small milk snakes. He took the milk snakes out to show us. One had just molted and the other was about to. They were each about 18″ long maybe. They are constrictors. Melanie held out her hands. He put one in them there. “It’s been a long time since I held a snake. It felt lovely, silky and smooth, lightweight as it brushed over my skin.”

After that we went back to the lower shelter. The largest of the caves opens on the north side of the road and continues with 2 more entrances south of the road. It’s low enough at the first opening to need to duck, but soon it opens up and there is plenty of room to walk. There is a paved walkway through it, and it’s lit, so not scary in any way. 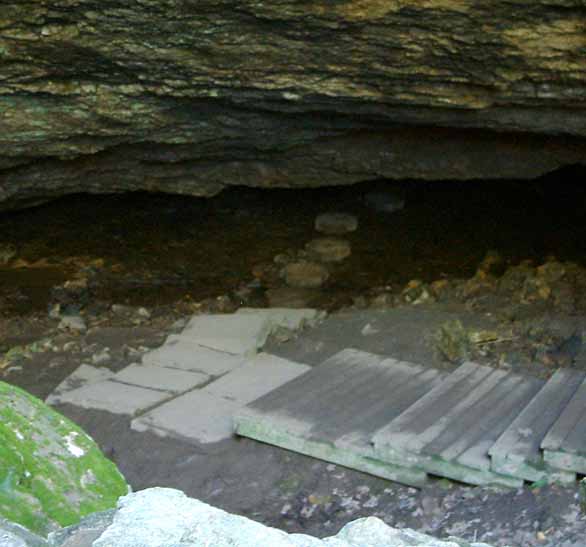 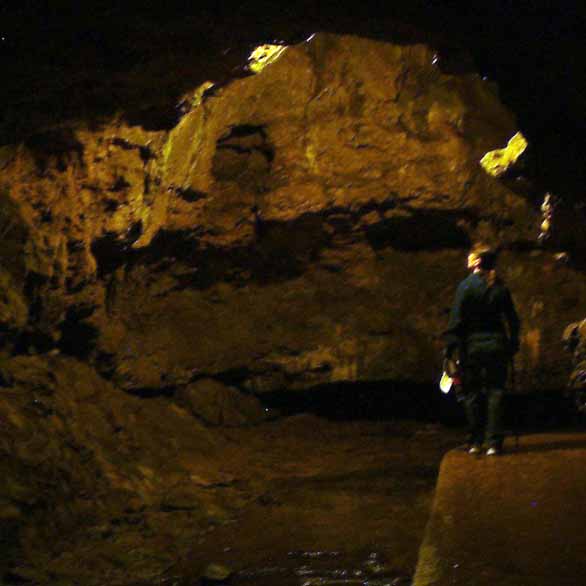 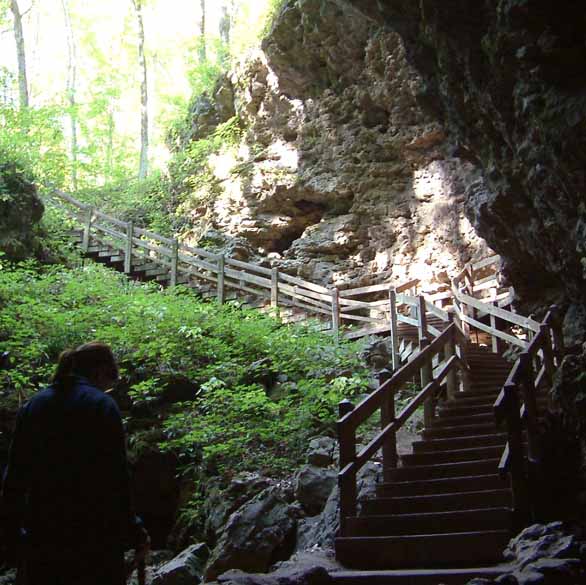 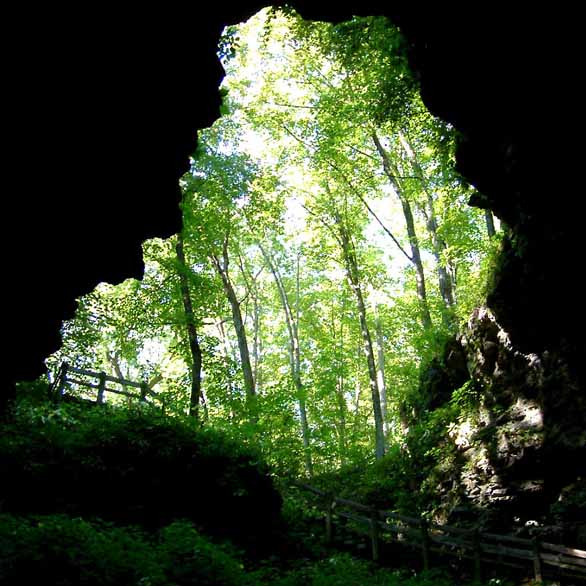 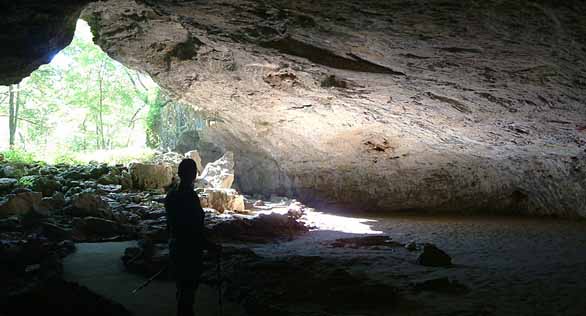 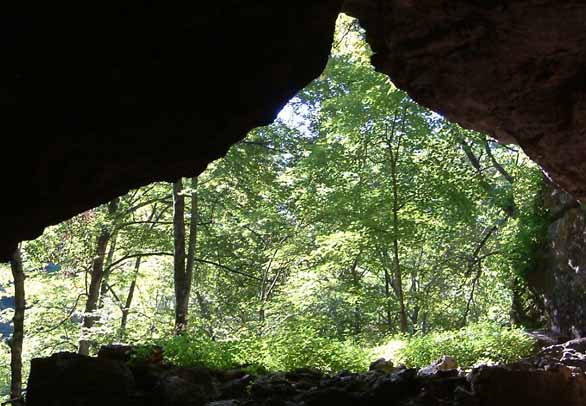 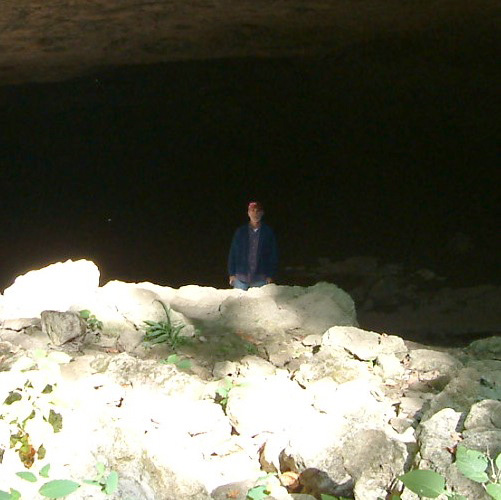 Once we came out the south end, we continued to hike the trail until it looped at the end. There are a number of other caves in the same system. A couple are big enough to step into, and others are narrow enough you would crawl. We didn’t do any of those. 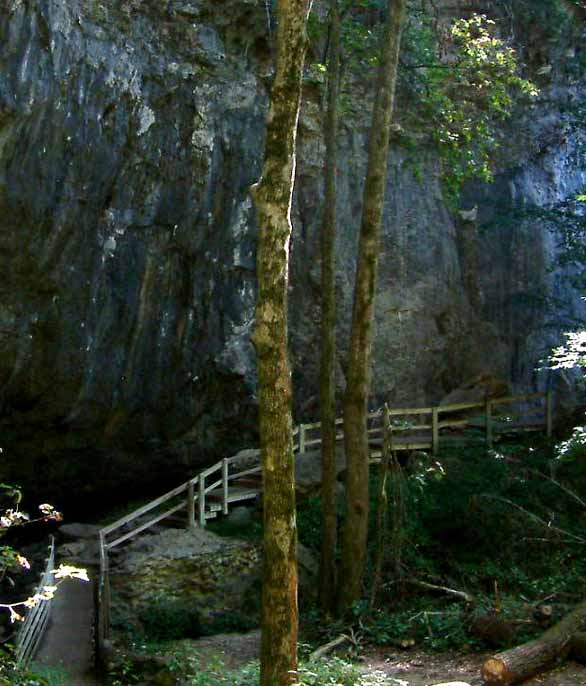 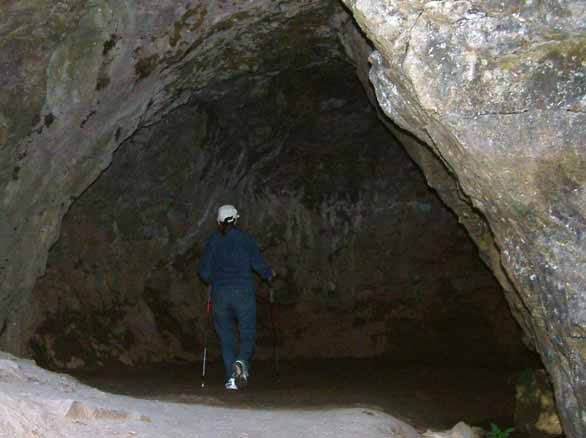 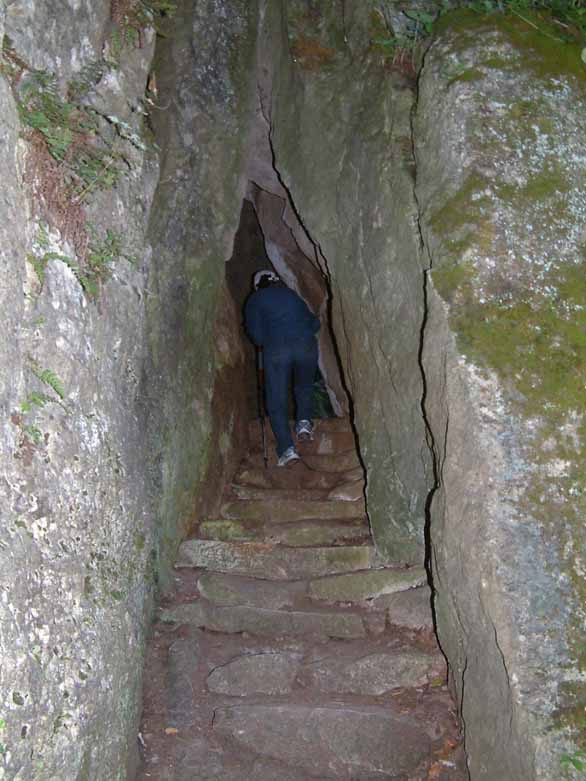 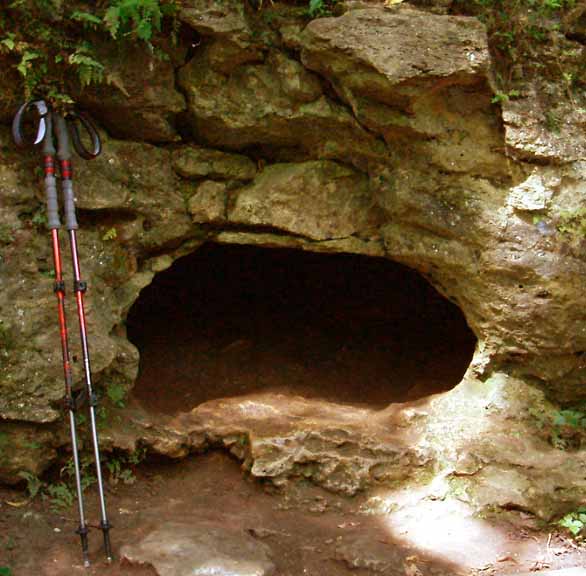 The trail runs through a valley, still filled with green underbrush. Wildflowers also grow, even as shaded as it is. Yellow flowers of various types, especially, seem to flourish. But purples and blues and oranges were visible, too. The trees down there grow straight up to heaven. Most are slim and tall, limbs starting many feet above the ground.

There were more hiking trails on the north side of the road, north of the big cave entrance, so we went ahead and headed that way, too. It was flatter than the south side but not flat. Just after we headed that way we heard a LARGE woodpecker. We have downy, hairy, and red-headed woodpeckers around here. Last year, a pileated was briefly in our neighborhood. It was obvious from the bird’s call, though, it wasn’t one of our typical birds. We both thought “pileated” right away, and the ranger confirmed it when we came back. We also heard a hawk. 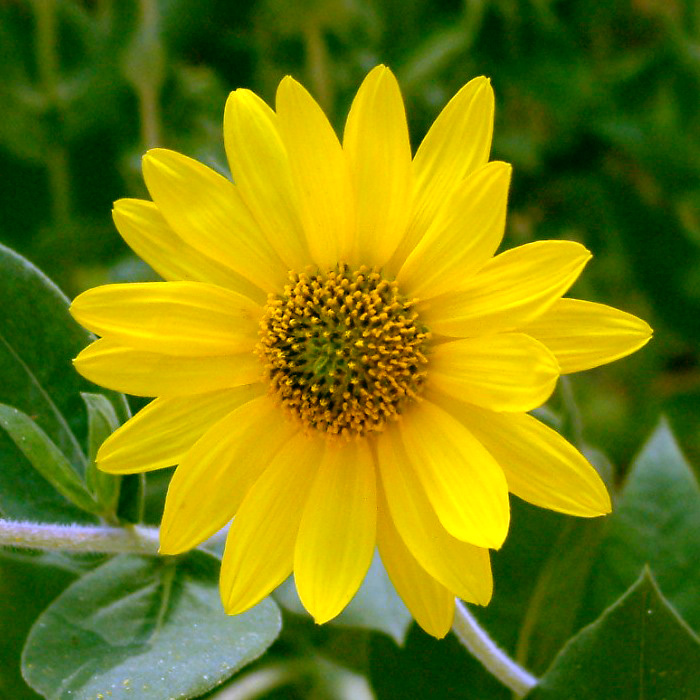 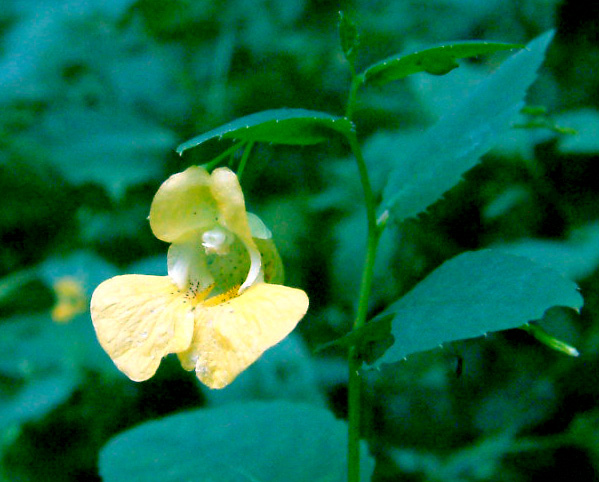 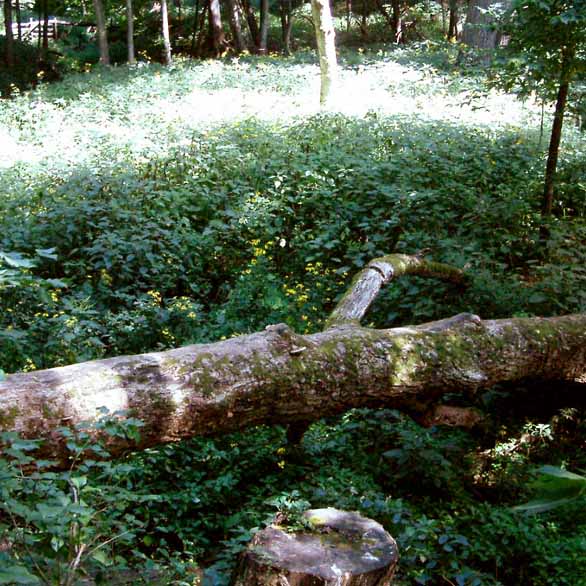 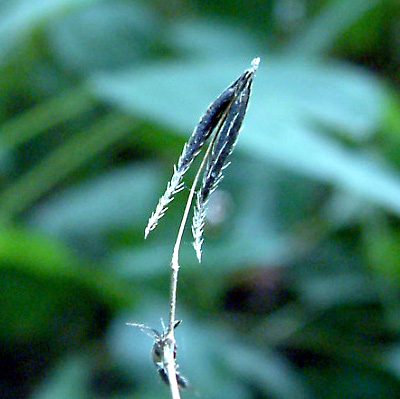 A few cottonwoods are down there, too.  Three pictures of one were spliced together. It truly reached 100 feet.

The hiking trail was uneven, a lot quite rocky and some roughed by tree roots. Up and down, watch your feet! It actually was more rugged in that sense than the trails we used in Glacier National Park.

We returned to the lower shelter. By that time the park ranger was there rather than in his office, and a naturalist was there, too. We talked with them for several minutes about the park, how it’s run, etc. In summer he has 6 seasonal staff members. In winter it’s just him. No extra maintenance workers, nothing. The ranger and his family live in the park. They grow a lot of their own food. He told us about all the tomatoes he puts up to feed his four daughters! And he had concord grapes with him that he and the naturalist were going to take off stems so he could make jelly and juice to feed his four daughters. He gave us each a stem of grapes. They were really good, not like store-bought, for sure.

The park was great. If it weren’t such a drive from our home, it would be good to go back regularly.

When we left we went back to the same town where we had breakfast. There is a sort of famous restaurant there, and we had lunch before heading home. The food was quite good. Their reputation is deserved.

After we got back, we both fell into naps. It was a really good trip. 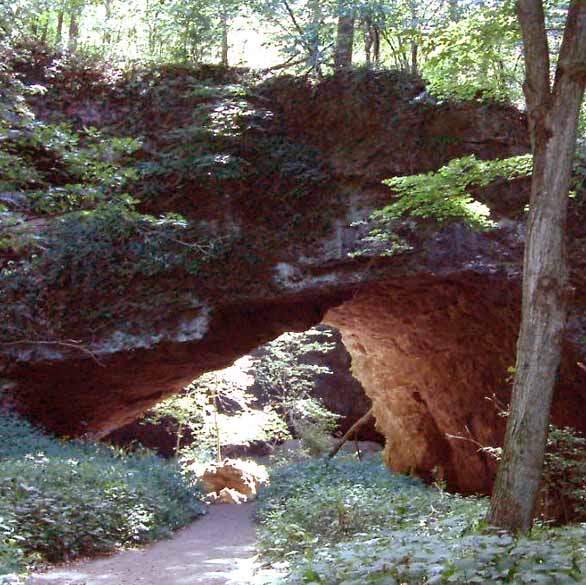