by Jim in IA

I was very involved in the 2012 Obama campaign as a local volunteer and neighborhood team leader. As such, issues constantly came up that forced me to question why I supported or opposed them. Is it right? Is it wrong? Doesn’t it depend on a lot of other things? I needed to feel I understood them internally. Only then, could I use them as talking points to potential voters in my neighborhoods.

I constantly asked myself how the conservative right could be so diametrically opposed to what I believed. I don’t consider myself to be unusually liberal. In fact, I’m very conservative is some things. How could conservatives feel so absolute and certain that they held the high ground morally? It was frustrating. I couldn’t think that way.

I pondered the possible reasons. Some insight came after listening to a Bill Moyers program with Jonathan Haidt. In it…

Bill and social psychologist Jonathan Haidt talk about the psychological underpinnings of our contentious culture, why we can’t trust our own opinions, and the demonizing of our adversaries. Compromise becomes a dirty word.

How do Conservatives and Liberals See the World? from BillMoyers.com on Vimeo.

At last some insight. Social psychology is not my area of expertise. I am a teacher and scientist. Logic and clear thinking are a big deal for me. I saw none in the way our political system was behaving. Haidt pointed out how people are basically very similar when it comes to which guideposts they use as foundations for moral judgement and behavior. But, they differ significantly on which of those foundations are held in highest importance to them. It is testable and measurable.

Granted, this information is not new. Haidt has spoken about it on TED, among other places, since 2008. Do a search with Haidt and you find several instances of his work and talks. I would like to share what I found in looking into this issue of moral foundations. It was very revealing and explained a great deal about the differences in liberals vs conservatives.

Jonathan Haidt is part of a collaboration of social psychologists who study morality and politics. Their web site MoralFoundations.org is very comprehensive and interesting. Their studies are useful for ethics classes and seminars. They use it to test theories of moral psychology. A goal is to promote understanding across the political spectrum. They want to understand why morality varies greatly across cultures, yet still shows many similarities between them.

The group originally identified 6 moral foundations they felt were present in all cultures.
(Taken from their website. Emphasis is mine.)

1) Care/Harm: This foundation is related to our long evolution as mammals with attachment systems and an ability to feel (and dislike) the pain of others. It underlies virtues of kindness, gentleness, and nurturance.

2) Fairness/Cheating: This foundation is related to the evolutionary process of reciprocal altruism. It generates ideas of justice, rights, and autonomy. [Note: In our original conception, Fairness included concerns about equality, which are more strongly endorsed by political liberals. However, as we reformulated the theory in 2011 based on new data, we emphasize proportionality, which is endorsed by everyone, but is more strongly endorsed by conservatives]

3) Liberty/Oppression: This foundation is about the feelings of reactance and resentment people feel toward those who dominate them and restrict their liberty. Its intuitions are often in tension with those of the authority foundation. The hatred of bullies and dominators motivates people to come together, in solidarity, to oppose or take down the oppressor.

4) Loyalty/Betrayal: This foundation is related to our long history as tribal creatures able to form shifting coalitions. It underlies virtues of patriotism and self-sacrifice for the group. It is active anytime people feel that it’s “one for all, and all for one.”

5) Authority/Subversion: This foundation was shaped by our long primate history of hierarchical social interactions. It underlies virtues of leadership and followership, including deference to legitimate authority and respect for traditions.

6) Sanctity/Degradation: This foundation was shaped by the psychology of disgust and contamination. It underlies religious notions of striving to live in an elevated, less carnal, more noble way. It underlies the widespread idea that the body is a temple which can be desecrated by immoral activities and contaminants (an idea not unique to religious traditions).

The people at MoralFoundation.org developed a questionnaire to measure the moral profile of subjects. You are encouraged to visit and participate at this link at YourMorals.org. The definitions and terms used in the foundations evolved some over time. Currently, the questionnaire measures 5 of the 6 foundations listed above. They are now described as Harm/Care, Fairness/Reciprocity, Ingroup/Loyalty, Authority/Respect, and Purity/Sanctity.

Word spread about the questionnaire as the story about their research appeared in newspapers, blogs, magazines, and across the internet. People from all backgrounds and regions noticed and clicked on links in the stories to go to YourMorals.org and do the survey. A large number of results were collected from a wide variety of sources. Those sources with an internet presence could be tracked. Web servers keep track of referring traffic. YourMorals.org analyzed the data collected and compared it to the source of the traffic. They assumed…

What kind of results were they able to chart? How trustworthy were the results?

The questionnaire ranks you from 1-7 on a scale of very liberal to very conservative based upon your responses. From the results published in September 2009 by a blog at Data Science and Psychology, it appears to show a consistent trend across sources from liberal to conservative. Liberal individuals rely heavily on the first two moral foundations of Harm and Fairness. Less on Ingroup, Authority, and Purity. Conservative individuals rely more equally on all five foundations. Harm and Fairness are actually less important than Ingroup, Authority, and Purity. 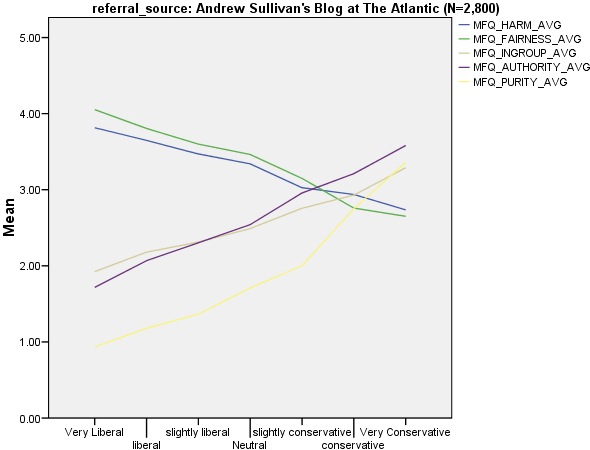 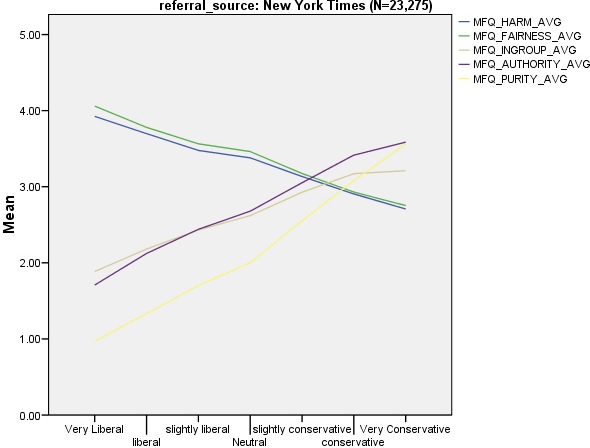 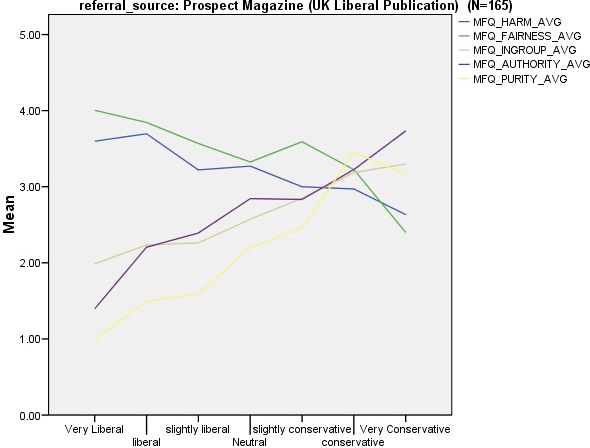 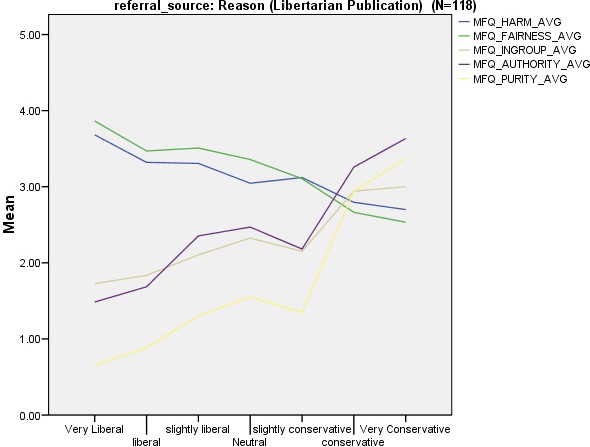 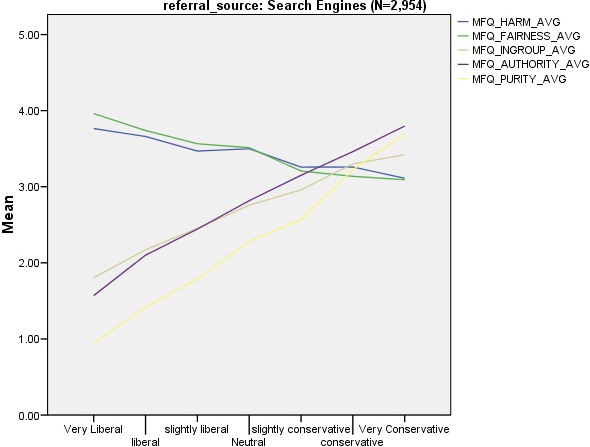 My Own Results of the Questionnaire

I decided to take the survey myself to see where I fit compared to liberals and conservatives. It was about 40 questions in length. I used the version on the web site of YourMorals.org. They ask for a login in order to keep track of results. Listed there are also many other studies open to your participation. You can also find web addresses of versions of the moral foundations survey via your search engine that don’t need login. Based upon the 5 foundations and results from 4,382 liberals and 12,950 conservatives, my green bar results are high for the first two foundations like other liberals. And, they are lower for the next three. No surprises here.

In this chart, my results in green, four items looked more closely at different types of fairness. Conservatives are expected to score higher in the first set of bars about proportionality (“Employees who work the hardest should be paid the most.”) Liberals are expected to score the highest on questions about equality in the second set of bars (“A fair society would be one in which everyone ended up with roughly the same amount of money.”) The third and fourth sets of bars show responses to questions about liberty and the importance of private property. I seem to value private property a lot. I wonder why.

So, have I addressed my original quandary I had during and after the campaign? Yes, I understand better. The two groups approach moral decisions differently. All of us use the same set of foundations to base our moral decisions upon. But, there is a big difference in the emphasis liberals place on the first two of Harm and Fairness. Conservatives don’t value them as highly as belonging to the right Ingroup, respect for Authority, and Purity of intention. Those differences are where the conflicts and frustration come into play. What determines which of the two patterns we end up following? Are there triggers at a young age that cause us to follow one path or another?

14 thoughts on “Our Moral Foundations and Decisions”