I made my first quilt more than nine years ago. It was a pretty horrible experience. I was thoroughly ignorant. All I knew was that a quilt had three layers, and that the “top” layer typically had pieces of fabric sewn together. Well, I did that. I cut the fabric using scissors after drawing around a square of manilla from an old folder.

The thread tension on my sewing machine shifted unexpectedly between fine, and not fine at all. I often was tempted to throw the machine through the window. Unfortunately, replacing the window would cost a lot more than replacing the machine!

At my daughter’s baby shower, I told her I didn’t care how many babies she had. I would never make another quilt!

The center of this quilt, everything inside the green border, was that first quilt. The whole quilt you see here was after I repaired and enlarged it about five years later. It looks pretty crude, but my granddaughter still has it and still loves it. (And I still love the pink plaid!) 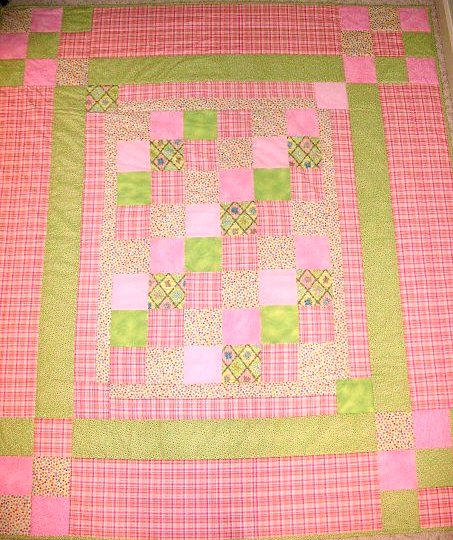 But after making that first quilt, I had to make another, because another baby was due. It was a guilt quilt. And so were the next two.

By that time, I had learned a few things. I had a new sewing machine and a rotary cutter, mat, and rulers. These simple tools (and a seam ripper!) started me on my way to the quilting I do now.

Since then I’ve made well more than 100 quilts, including finishing twelve last year. Two of those were bed quilts, two were “medium” sized, and eight were lap/nap quilts.

What was your first quilt? (Or are you still working on it??) Did you enjoy the experience? Did you do it on your own or take a class? Who was it for?

3 thoughts on “My first quilt”